My hip hurts a little less today. I walked Lucy, went out to get blood work done and grab some groceries, and bagged up more stuff for donating and Freecycling.

I realized I'd forgotten about iZombie for a month which means FOUR WHOLE EPISODES, whoo-hoo!

"He puts the boys to sleep with boogie every night/ And wakes them up the same way in the early light"? While I am not unfond of boogie, in its proper place, neither of these things sounds terribly appealing to me.

I said "Sandwich before cinnamon bun!" He said "It's Backwards Day". He swam 5k today AND walked 1.5k home from school in the pouring rain. I decided not to quibble. 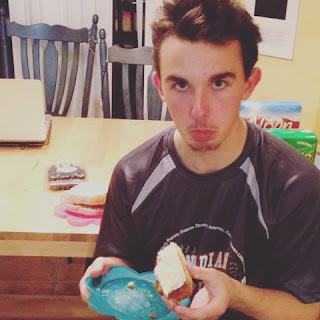 We were talking about what cereal we were and weren't allowed to eat as kids the other night, and I got everybody jonesing for Alpen. I bought some today.

We still  have a ridiculous number of stuffed animals. I am aiming to remedy that situation in short order.

My blood was taken by a beautiful black-skinned woman named Lemlem today. I was the only patient, so the other nurse there was telling us about how she won five thousand dollars in the lottery and we were talking about how people who win a lot of money often don't end up happy, and Lemlem said her mother knew a poor farmer in Ethiopia who won a large amount in the lottery and when they came to tell him about it he had a heart attack and died. So... well... make of that what you will.

It took me over six months to watch the movie version of We Need to Talk About Kevin because it was so disturbing. They had to completely change the chronology of things from the book to make it work as a movie, which I think they did admirably. Both Tilda Swinton (Kevin's mother) and Ezra Miller (Kevin) were in Trainwreck, and they were playing totally different characters, but it still gave me a shiver.

If this Lisa chick doesn't pm me back right quick, she's going to lose her shot at this highly desirable Sorcerer Micky Mouse. (Freecycle Without Pity)

Angus has a girl coming over to watch a movie tomorrow. I'm resisting the urge to make heart-shaped cupcakes.

Hannah said…
That's true about the lottery. I was two steps removed from a lady who won $5 million - she worked with my friend's mom. Within six months of the win, her marriage had broken up, they'd had to sell their house & move because total strangers were knocking all hours of the day & night asking for money, she'd quit her job and then come begging to have it back because she was bored and lonely... it was awful.

StephLove said…
We are still in the acquisition phase so I can't even give them away faster than they are coming into the house. Stuffed animals, I mean.

Nicole said…
I love everything about this and I have so much to say. First: cinnamon buns are awesome. Second: we weren't allowed to have any sugary cereal but we were allowed to put a spoonful of sugar on our cereal. Then once I had Froot Loops at a friend's house and I was so disappointed because it was disgusting and I had built it up in my mind. Remember Honeycombs? Those were actually kind of yummy. We got them as a massive treat like twice a year. Third: the lottery thing. In math there's a thing called mean reversion, and lottery winners are almost always completely broke at the end of five years. Mean reversion in action! But often it's because people go hog-wild at the huge number, then overspend and overgift and before you know it, broke. I don't THINK this would be the case with a powerball $100 million though, because that is a lot of money. Fourth: I have like eight cans of coconut milk in my pantry right now. They were on sale.
November 20, 2015 at 5:44 AM

slow panic said…
I have been kicking it old school and buying Lucky Charms lately. So yummy. No, I was not allowed to have them as a child. No, I do not buy them for my children.

I buy them for me. I hide them and I eat them.

Maggie said…
I'm relatively certain that I could neither read nor watch We Need To Talk About Kevin so kudos to you for doing both no matter how long it took. Whew, that's some depressing shit.

I was not allowed to have sugary cereals growing up and it's frustrating because I totally missed the window for enjoying them and most taste absolutely disgusting (except granola, which I'm sure doesn't count because it's healthy right? RIGHT??)

Finally, I have no coconut milk to offer you, but I'm way over here on the left coast of the US so I'd be of no use anyway...

p.s. forgot to say I love iZombie. It totally snuck up on my last season and got surprisingly intense and sad. Love it.
November 20, 2015 at 9:39 AM

Lynn said…
A friend of mine gave me a copy of We Need To Talk About Kevin but I only made it about 1/4 of the way through before I had to quit due to extreme distress. I absolutely adore Ezra Miller and would love to watch the movie but he will just have to live with me only watching everything ELSE he's ever done. Sorry, Ezra!

I took my youngest with me to the grocery store last weekend and we ended up with a box of Cap'n Crunch. My husband has declared it to be a "weekend only" cereal so the girls just had some today for the first time, and it was declared the Greatest Food Ever. I feel my work as a parent is done, no?
November 20, 2015 at 11:31 AM