June 15, 2015
Sometimes I think, wouldn't it be nice to invite a bunch of people I really love over to my house. Maybe once the garden is in...

...and the osteopermums have had a chance to recover from Lucy biting their heads off...
...and the lone remaining bellflower had just bloomed.
Collette would come over early and help me juice a hundred lemons and limes and we would play music and sing along.
Maybe I would mix some awesome newer friends in with the awesome older friends, and not worry at all that they wouldn't mix well, because everyone knows that awesome goes with awesome awesomely well.
And even though it rained all the rain there ever was the day before and I really had doubts about whether the promised sunshine would show up, it would show up...
...but the temperature would be cool enough for me, and warm enough so that I wasn't sitting in my back yard alone.
And maybe there would be a cute little baby-type person who would toddle around reading us an ABC book and sitting down periodically to dust off her feet.
And of course she would be beautiful, because, duh, look at her mom.
(*Remembers that Cynthia brought trifle and there is still some in the fridge. Leaves for a while*)
And my neighbours wouldn't have to call the police on us for being too loud, because...(also, some people went next door with Paul to smoke cigars and look at his Mustang convertible, which was cool because I felt like my birthday party had excursions).
And there would be purple martinis, because purple. And martinis.
And cupcakes.
And the cutest cupcake-labeler ever. 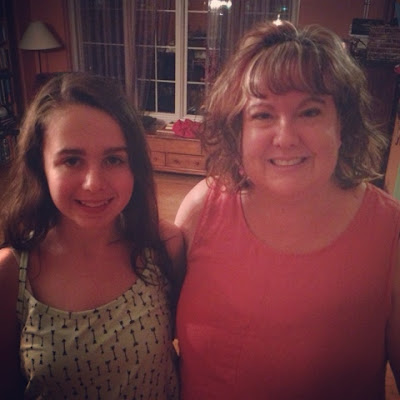 And the purple martinis would make Pam's head go from this position...
And Collette and I would test out whether our magical ability to always take a good picture together when we're tipsy had a drink limit.


And hopefully there would be inappropriate pictures taken at some point, from which I will remove any identifying features to protect the guilty.


And maybe at some point there would be a photo that looks like it was taken by the bodiless head in the cooler from the end of Dawn of the Dead, which would be intriguing, because, no hands!

StephLove said…
I happy it was so perfect.

I think I've had one birthday party since I turned 14 and that was a joint one with a friend some time in my mid-20s. I'll turn 50 in 2 years. Maybe then.

Hannah said…
Stupid geography indeed, your birthday looks like tons of fun. Wish I could have been there. xoxoxo
June 15, 2015 at 3:41 PM

Maria said…
I never expect much from birthdays and am such a hermit that I have to beg my voraciously outgoing wife NOT to throw me a party, I suspect that I would enjoy one if I would just let myself let go as you do.....
June 16, 2015 at 2:16 PM

Pam said…
Awesome birthday party for an amazing woman. Those martinis are way too delicious. And , well, purple, cannot resist. Loved seeing all that could come to celebrate with you. Xoxo
June 17, 2015 at 10:43 AM