Mondays on the the - oh frig it, I'm just going to say some stuff

March 31, 2014
I was going back to the gym today. In January I don't go to the gym. I used to keep trying, but there's this thing where I stop being able to visualize myself doing something, and then I can't do it. I would think "tomorrow I'm going to work out and then get groceries". Then I'd wake up in the morning and a metal perimeter security barrier would slam shut in my mind and I'd be paralyzed until I thought "okay FINE, I'll just get groceries and then I'll walk on the treadmill" and my brain would un-vapour-lock my body.

I know, I know. Whacksack of nutjob with sprinkles.

This period of gym-not-sium extended until the end of March this year because of sickness and a slightly delayed winter depression. I keep the membership because it's a few dollars a month and I always know I'm going to want it again for most of the year. So last night, as I surveyed my arm flab in the mirror, I thought that I would get up bright and early today and hit the gym and get groceries.

Then I woke up at four a.m. and couldn't get back to sleep.

TOO EARLY AND NOT BRIGHT AT ALL, STUPID BRAIN.

So I slept in. And I felt crappy. And I got my hair done yesterday, which is all well and good, but the first few days after I get my hair done are always a grab-bag of hair weirdness, and hair weirdness always seems extra bad when I'm going to the gym, although that's kind of dumb, surely people at the gym are going to mock my out-of-shapeness or lack of coordination before my hair.

Anyway. I had to take Angus to an orthodontist appointment after lunch and I was all poised to just chuck it and wait for a more auspicious day.

Then I didn't. I took my weird hair and my running shoes and my lock, the combination to which I wasn't even sure I remembered, and pumped so much iron that I'm typing this really fast in the few remaining minutes I have before my arms stop working totally. And this really hot chick in a racer-back tank with fabulous curly hair caught me catching her yawning and smiled the greatest smile at me. And I did the pull-up push-up machine and at the end I actually did that thing where it's so hard to do the last rep that you have to make a noise, which is kind of embarrassing but also makes you feel kind of badass. 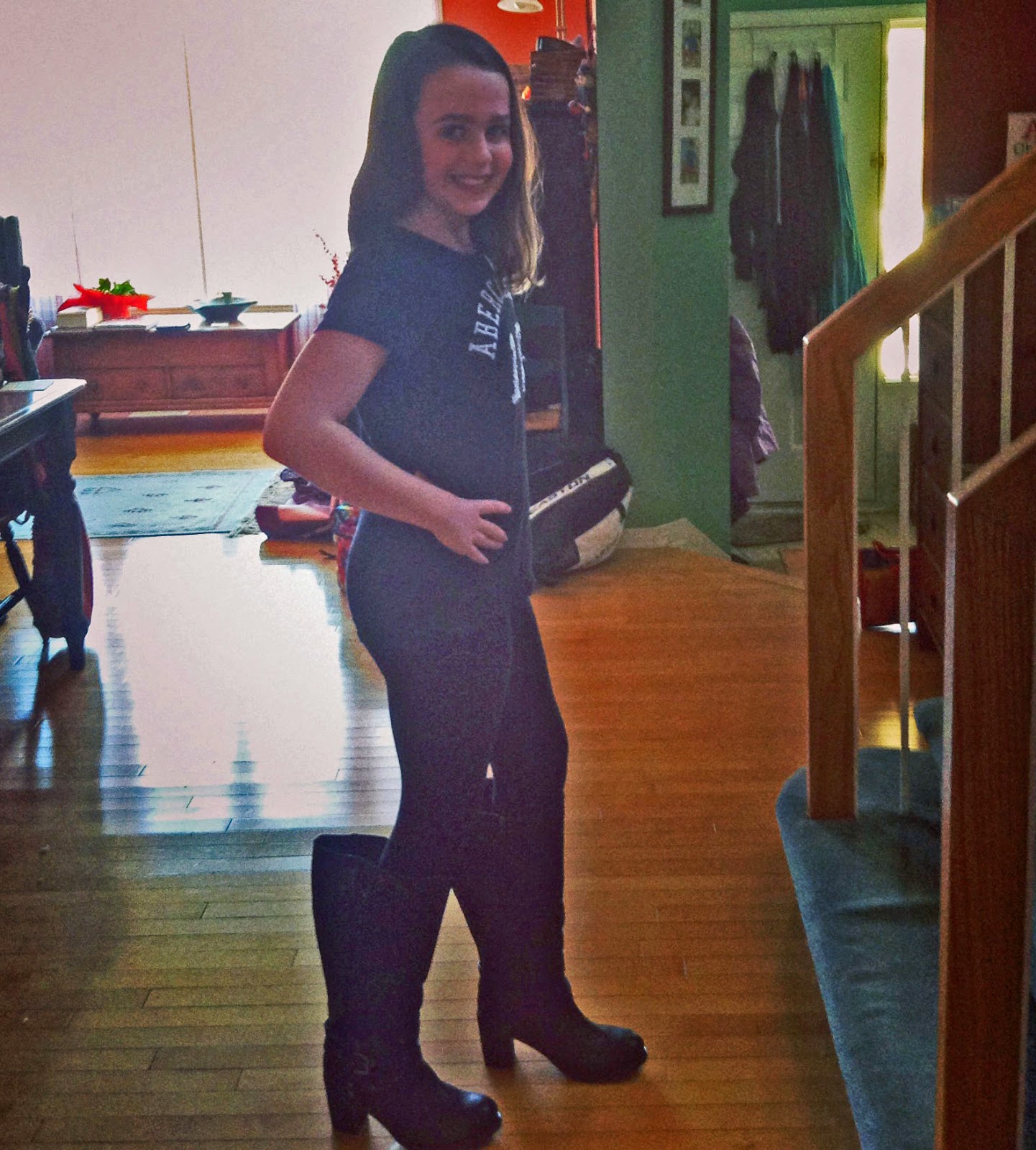 Then I came home and I had time to shower and eat lunch and pick up Angus, and they told him he's getting his braces off next month. Then we went to my mom and dad's house to pick up Eve and my dad was happy because it's sunny and warm and he made me a giant gin and tonic and the kids ate ice cream. Then we came home and I showed the kids the tall black boots with the higher-than-normal-for-me heel I bought last month because they were ninety bucks on sale for twenty, and I bought them even though I wasn't sure I could walk in them, and we all tried them on (including Angus, as far as possible) after struggling like crazy to dig out the foam crap that was jammed in them to keep the shape, and Eve hobbled around in them instagramming herself and swearing that she was stealing them as soon as they fit.

And there was laughter and rejoicing in the kingdom.
happy days hear me whimper

StephLove said…
I'm happy to hear you had good day. And I think you will be able to keep those boots a while before they fit Eve.
April 1, 2014 at 4:33 AM

Sasha said…
Those ARE some kick-ass boots. And way to kick-ass at the gym-did-sium. The toughest part of the workout is tying up your shoelaces, and all that jazz. (Don't you love motivational sayings? Yeah, me neither. These are more my style: http://www.despair.com/demotivators.html)
April 1, 2014 at 11:05 AM

alison said…
Yay for the gym. I embrace my weird-ass hair at the Y. Because approximately half the clientele there have (has?)CRAP I CAN'T FIGURE IF THAT'S PLURAL OR SINGULAR no hair at all.