November 17, 2013
Because when I finally decided at the last minute that I was making this for the dinner party, I should have assembled my fancy ingredients all at once to take a picture, but I didn't. Instead, I tried this, but Rose was sleeping on Eve and I was distracted and didn't manage to get a decent shot. 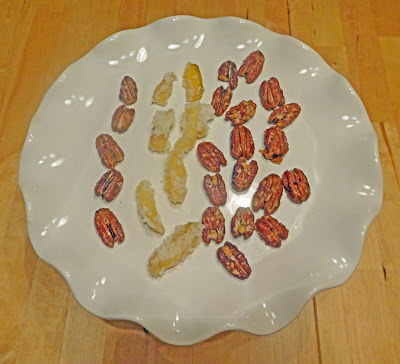 Then I realized that it probably would have been a better, more balanced shot if I had put the pecans, the ginger and the maple sugar all together, but by that time I had already chopped up the ginger and baked it in the cake. Also, you can't see the pedestal from this angle so it just looks like a tippy plate. 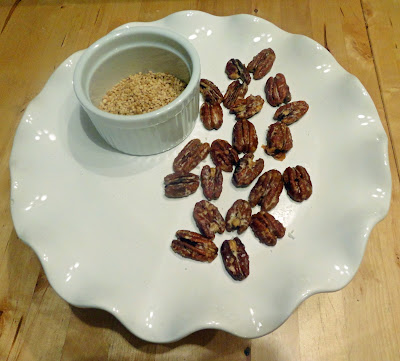 Then I was hemmed in at the table by other people who were drunk and pitiless and didn't care that my camera was unreachable in my purse and I have to post EVERY SINGLE DAY in November, so I didn't even get BAD pictures of Collette's amazing peanut soup with smoked chicken or Janet's fabulous Boston lettuce and feta and pomegranate salad with Cajun shrimp and Margot's marvellous Moroccan Salmon Cakes and Susanne's truly incomparable Beef Wellington which turned out perfectly even after Collette walked in and said "What are you making? Beef Wellington? That's REALLY HARD to make. It never goes well on that Gordon Ramsay show. I do NOT have a good feeling about this." 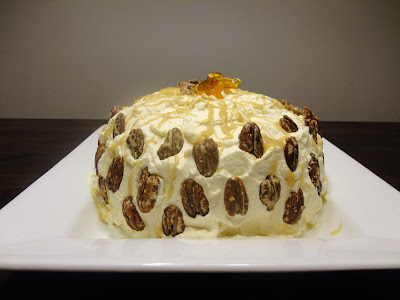 I also didn't get a shot of the maple sugar candies that Matt made because I was (incredibly stupidly) worried that after we cut the cake into ten pieces they would be too small for everyone, so he made them as garnishes for a (totally unnecessary) scoop of ice cream. I stuck one on top of the cake. 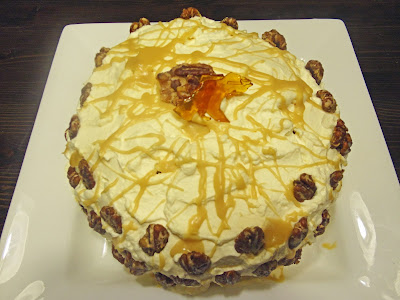 I'm a barely decent baker. I'm a truly horrible food blogger. I am unsurpassed as an eater. It's good to know your strengths, I always say.

Finola said…
I don't comment every day, but I am reading every day and you always make me laugh. Thanks for cheering me up in November.
November 18, 2013 at 5:09 PM