November 25, 2013
So, coming off a week where I felt like absolute hell and couldn't fall asleep before two a.m., I was heading into a week of solo parenting without even MY parents for back-up (how's Costa Rica, Mom and Dad? said with only the faintest undertone of bitterness) and feeling a little nervous.

BUT, I took half an Ativan and a Benadryl and a few puffs off my inhaler last night, went to bed earlyish and slept hard with only a couple wake-ups from 11:30 to seven. Made lunches, got kids to school, went to the gym, got groceries, cleaned out a cupboard containing eleven boxes of stale crackers and made chicken stock and curried crock-pot beef and croissants (okay, the croissants were frozen in a box and I just let them rise and baked them, IT COUNTS, MOTHERFUCKERS.) Had dinner with the kids, watched The Simpsons with the kids, helped Eve practice piano, then worked on my Christmas calendars.

It was a good day. Compared to what I was expecting, it was a great day. It would have been a goddamned near perfect day if not for the small fact that, after dropping Eve off at school, I drove into a side street to wait for Pam to walk by after dropping Laura at school so we could head to the gym. I overshot where I wanted to be and backed up slightly.... into a huge, deeply-planted sign that I SWEAR wasn't there a minute before. And cracked off a piece of my bumper. And made a couple of kids goggle at me like I had descended from the sky in a cape and tights. And completely lost my composure.

Pam was nice. She offered to go drinking with me instead of to the gym. We decided that no bars were 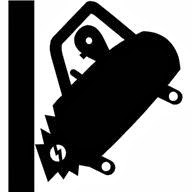 probably open at eight-thirty a.m. and went to the gym anyway. She also said, "Look, if you think of it as a percentage based on all the times you back up and DON'T smash into a sign, the numbers are really in your favour". She also didn't judge me when I said I needed pudding.

My husband was nice. He texted "Shit happens. Don't worry about it." Of course, he can't see the damage from Tokyo. I should probably try to get it fixed before he gets home.

Eve was nice. She said "if it makes you feel any better, some kids at school were talking about some guy they saw driving around who drove into a sign and his WHOLE BUMPER fell off." Me: "...." Her: "OH MY GOD, WERE THEY TALKING ABOUT YOU?"

Last week-end when Angus was in Toronto for volleyball he left his prescription face-washing stuff behind at the hotel and we thought at first that the new refill wasn't going to go through our insurance and we'd have to pay full price for it. He was really upset and wanted to pay for it himself, and I said "look sweetie, we're a family. Sometimes Daddy and I do stupid crap that costs the family money too. It happens - there's no point beating yourself up about it." I guess I just modeled that extra well for him today.

Maybe I should stop dissing November. Also, if I hadn't been headed to the gym I would have just driven home with my unblemished vehicle, so I should OBVIOUSLY stop exercising.
happy days hear me whimper nablopomo 2013
Location: United States

Dimitra said…
It sounds like "frickin" fabulous day! What accomplishments! That would wipe me out for the rest of the week! And, yes, I always give credit for frozen croissants too.
And as for the car, what are bumpers for anyway? To bump into things right!?! It served it's purpose.
As my good friend once told me when we drove over a curb in her brand new car, and were able to drive away with only a few odd noises, " eh, what's a car for? To drive from A to B. Mission accomplished".

Nicole said…
In all seriousness, it's a good lesson. I have a kid who is like Angus - very worried when mistakes happen. It's good modelling to show that it's not the end of the world. It's a bumper! No big deal! Right? Also, your friend is exactly right - there are so many times you back up NOT into something.
November 27, 2013 at 12:08 PM

Val said…
I hope this week is kinder to you. On the bright side too, the bumper incident highlights what great husband, chidlren, and family you have. :)
December 2, 2013 at 12:13 AM