November 04, 2013
I'm living in a plague house. Variously pitched coughs echo off the walls. My husband and I have about three-quarters of a voice between us - apparently Angus was wholly unhelpful and disproportionately amused when Matt was trying to yell his order into the drive-through microphone at Tim Horton's on the way to baseball. Strepsils are at a higher premium than mini Caramilks.

So although I had big plans for a really good Mondays on the Margins post for the first Monday in NaBloPoMo, I think I'm going to have to postpone it. I just realized my next assignment in my Computers Course is due next Tuesday, and I'm leaving for Barrie Thursday morning to spend the week-end with Zarah, and then committed to helping with the Book Fair every day next week. The assignment should probably be done before I leave. Therefore, I will be spending my evening making various format changes to a Word document entitled "Oceana Grill Cheese Promotion". So don't worry - I'll definitely be missing you more than you are missing me. 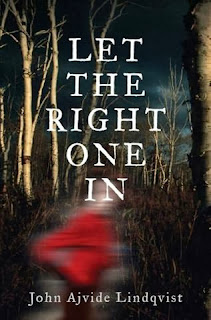 But just to stick in a book reference - I've started watching the American version of Let Me In, which is a remake of Let the Right One In, which is in turn the movie version of an absolutely stunning vampire novel also called Let the Right One In by John Ajvide Lindqvist. I would have watched the Swedish version, but Netflix only had the American version. Truthfully, I wasn't totally disappointed, because Chloe Grace Moretz is in the American version, and I sort of think of her as the new Natalie Portman, if not the new Audrey Hepburn, so I probably would have watched this version too, eventually. It's quite affecting so far, and also appears quite Swedish despite taking place in Los Alamos, New Mexico - everything looks very cold and stark. I haven't finished watching it because my treadmill workout ended.

Other than the fact that it was a really original and emotionally wrenching vampire story, one where you end up almost rooting for the 'monsters', the most striking thing about the novel is that every successive novel I've read by the author has been disappointing by comparison - and from the reviews I've read, I'm not in the minority on this. I always wonder how this must feel for the novelist; does he shake it off, in a "different strokes, different folks" kind of way, or does it eat at his soul? I've read three other books by him - one was still quite good, the other two started strongly but then amounted to very little. It's a curious phenomenon.
books 2013 nablopomo 2013

Lynn said…
Don't you think, as an author, that there must be a crazy amount of pressure to be fabulous if your first novel hits it out of the park? I'm shocked that more novelists aren't like Salinger, publishing one celebrated work and then hiding from the world for the rest of their life. I know I'd totally crumble under the pressure.

Maria said…
I fell madly in love with this book and really enjoyed the Swedish movie version much more than the American one. It's like it caught the "otherworldly"...kind of murky, moldy, yet strangely beautiful world of a vampire.
November 5, 2013 at 5:16 AM

Nicole said…
This just reminded me...I have to go look at your archives because I need to make a wish list for my MIL for Xmas! She always orders whatever books are on my list, SCORE.
November 5, 2013 at 10:04 AM

StephLove said…
I have been meaning to watch/read some version of this. I guess the novel's a good place to start.

I hope everyone's healthy at your place, stat. I've been almost done with this cold forever, down to the lingering cough.
November 6, 2013 at 4:36 AM