Surly Tuesdays on the Margins or Something

October 23, 2013
I wrote that post title last night and then stared at it for a while and then went away and whined on Twitter about being brain-dead and spinning my wheels and feeling creatively bereft, and some lovely people commiserated and offered words of wisdom and comfort. So I took a deep breath, did some loin-girding and.... decided screw it, and went out for a beer. But I came back today.

While I was staring at my post title yesterday, and then procrastinating by looking at Facebook and checking if my assignment grade had been posted yet and uploading pictures to print and then emailing Kim when I saw a picture of her at my house last Christmas and remembered I hadn't answered her last email, Eve was across the table with paint, construction paper, toothpicks and pumpkins. She had been home sick with a cold for the day, and after I got groceries I came home and asked if she felt well enough to go get pumpkins. She said yes, so we went to the pumpkin patch and she picked two big ones and three little ones. 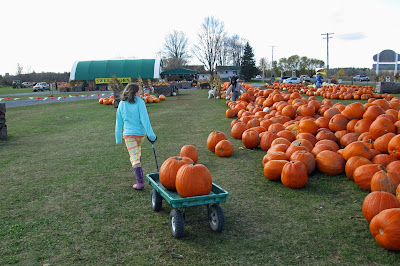 She then spent the rest of the afternoon cuddled up in my big chair making sketches of how she was going to embellish them. So while I was dealing with an utter lack of inspiration, and feeling that sinking, panicky feeling which is kind of dumb and yet kind of understandable, because it's not like this is my JOB, it's not like I get PAID to do it, it's not like anyone calls me on the carpet if I don't do it the day I meant to do it, it's not like it's really discernible that anyone even CARES whether or not I do it more than a pathetic once-a-week or so, but then since I don't HAVE a job I do sort of consider it an important thing that I make myself keep to some sort of structure and accountability, and if I start letting it slide it's usually indicative of larger problems in my life (insert deep breath)..... while all that was going on, THIS is what was coming from across the table:

"The littlest one is going to be the ultra-cute little mouse pumpkin. Well, a were-mouse. I don't care what you say, I think it will still be cute even if it has veiny eyeballs." 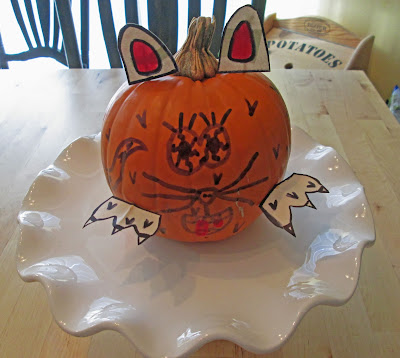 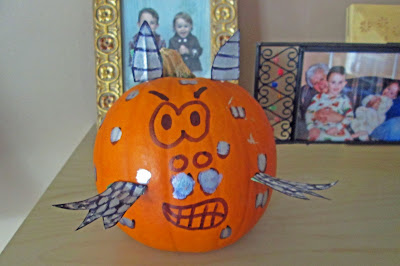 "What should I do with the middle one? A bat? Good idea. I'll make wings and tape toothpicks to them and stick them in. Oh, and then put dark glasses on it. It'll be a rapper bat. Oops, I stuck the toothpick in the wrong place. Ooh, now it's leaking. It's like....a SHAVING accident! *puts red paint and a small piece of kleenex on it* It's an adolescent rapper bat! Hey, look, the stem looks like a witch's hat! It's an adolescent rapper bat WITCH pumpkin! Ah, I don't feel like putting glasses on it." 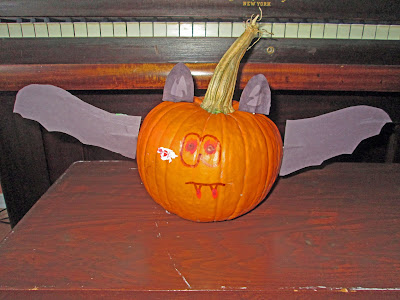 "I need another toothpick. Too bad I don't have an assistant. Then I could hold out my hand and say 'toothpick!' and she would hand me one. And then she'd say 'you're so creative! and smart! and pretty! No, I'm sure I don't have a fever."

"I can't believe I painted my costume shirt AND did all of these and I haven't made a mistake and had a big freak-out yet. Can you believe that?"

"Where's my paintbrush?WHERE'S MY PAINTBRUSH? Assistant! *I point to the paintbrush in the cup of water and ask 'that paintbrush'?* "Yes, THAT paintbrush. My assistant would have known where that was."

Amanda said on Twitter yesterday that maybe she and I were just balancing out our usual awesomeness with a fallow period so somebody else could use the awesome for a while. It's pretty clear who was sucking up the creativity in THIS house last night. 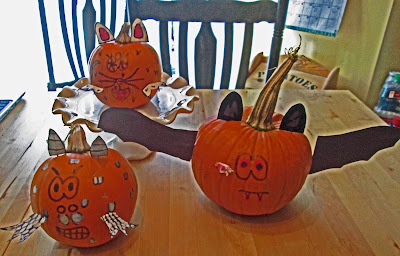 Maybe she'll let me use it when she's done.


being all meta Eve of destruction holidays

Nicole said…
Those pumpkins are the best. You're hilarious, and so is Eve. No I don't have a fever, why do you ask?

Sasha said…
They may steal our brain cells but they'll never steal our awesome. Where do you think she gets it????

StephLove said…
Eve is lucky. I make June go to school when she has that much energy. Taking her to school in the middle of the day because I've decided she's not really all that sick is my specialty.

It sounds like she had a nice day, though.

We had a very bloggable weekend, full of seasonal activities and I just can't write it because I don't feel about it the way I wish I did. Does that make any sense?
October 24, 2013 at 6:27 AM