I freely admit that I attended Blissdom under somewhat fraudulent circumstances. I did the same thing with BlogHer last summer, because Marilyn said it was legit to just go to hang out with your girlfriends in New York AND she offered to room with me, but I thought that would be my first and last blogging conference. I went to Blissdom because when were Nicole and Hannah ever going to scoot their little butts from Calgary and Halifax, respectively, to Toronto at the same time ever again? When you have a chance to catch lightning in a jar - or awesomeness on a hotel room couch - you take it, right? 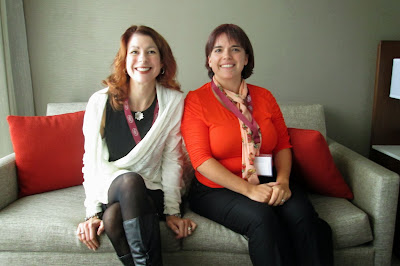 I had thought that my biggest takeaway from BlogHer (along with the fact that I kind of hate the term 'takeaway' and yet I'm still using it, WHY?) was that I am a personal blogger and that 'branding' or 'monetizing' my blog just wasn't going to happen. I tried one giveaway when I was sent a product that I did really like, and it went over with a resounding thump. What I'm comfortable with is reviewing books and sharing my snark-skewed view of life, the universe and goddamned baseball.

But here's the thing - I am a slow learner with retrograde amnesia when it comes to lessons in life and blogging. And the thing I learned at BlogHer and then learned again this week-end is that everyone will probably get different things out of something like this, and that's okay. It's also okay if I'm one of those people that only gets one to three things out of it, and not a person that goes home to write a new Manifesto containing Seventy-Six Articles of Faith.

When someone like Eric Alper says something like "you can do ANYTHING you put your mind to", I looked around and saw a bunch of people nodding. Personally, I was thinking "what if I put my mind to jumping off the CN Tower and trying to fly by flapping my arms? Eric, you're cute, but you're tripping." But when Schmutzie says "you are you, and your success won't look like anyone else's", suddenly this wellspring of recognition and gratitude overflowed out of my eyes and I knew if I learned (re-learned) nothing else that week-end that this would still be enough. And who knows? Someone else was probably all over the Eric Alper thing and saying fuck you Schmutzie, I am SO William Faulkner (oh relax, I'm exaggerating for effect, NO ONE SAYS FUCK YOU SCHMUTZIE). And then I hung around her like a stalker trying to think of something really good to say even though I try never to meet my heroes because I know I'll just go all mushy-minded fan-girl stuttering "you're just....so awesome and I just....awesome" and I did, I really did. Whatever, I got hugged by Schmutzie (even if it WAS out of pity), I'm good. 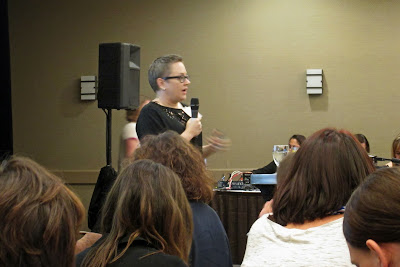 So I could list all the stuff I liked  - okay fine, I'll list the stuff I liked: the blog to book session with Julie van Rosendaal, who is SO nice and funny and sweet and generous with her knowledge; the power hour which gave me the conference experience I never expect to have, where for one moment I shed my cynical snarkskin and feel completely engaged and transported; floating in the hot tub and solving the world's problems with Nicole and Hannah (I touched their HAIR. I know what their VOICES sound like.) The Bigstorming creative session with Marilyn Barefoot, which I suspected might be cheesy and 'motivational' in a fake way, but turned out to be surprisingly (only because I'm a bit of a douche) practical and helpful, and I LOVED our group (Organic Vomit Party for the win!); Jully Black at the Outdoor party - wow. Just wow; the lentil lunch by Canadian Lentils - I have never shoveled that may lentils into my gob in such a short time. My meal plan for the next two weeks consists of lentil main dishes, lentil side dishes and lentil desserts; and the pajama dance party on the last night - most brilliant idea ever. 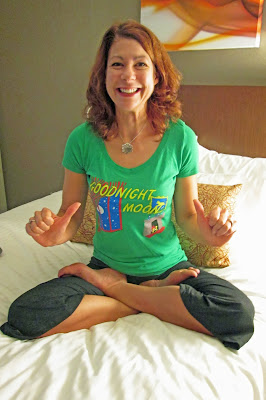 What did I not like? Well, I actually don't want to talk bums, unless we're discussing Nicole's fabulous ass.

I know, sweetie. If I had one like that I wouldn't be able to keep my hands off it either.
(Kidding. She's playing heads or tails trying to win one of Julie's cookbooks) 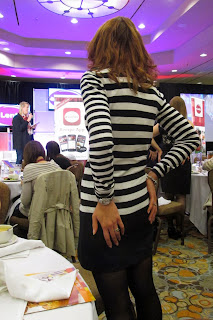 Also, I regret that I didn't get a picture of Nicole with both her legs behind her head on the hotel room hallway floor.
I DID get Hannah in bed, though. 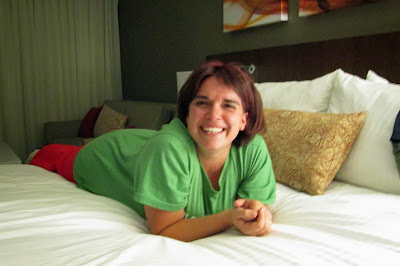 What I learned (again) I think, is that it's pretty much impossible to come to this sort of thing and NOT get splattered with a little inspiration, enthusiasm and positive energy, even if you ARE a grumpy, depressive malcontent with relentlessly low self-esteem. 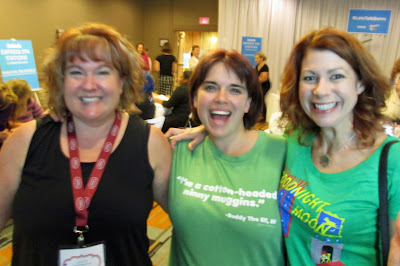 And thank you so much for liking my talk. Seriously. The worry is always that someone really will say FUCK YOU SCHMUTZIE, so it's lovely to know that someone doesn't.
October 8, 2013 at 4:50 PM

Nicole said…
You made me cry! I miss you! Why don't we live close? I love you and DAMMIT WE ARE FLYING OFF THE CN TOWER TOMORROW. Douche. Heh. Insensitive bitch!
October 8, 2013 at 5:34 PM

Sasha said…
So, like, even *I* could get something out of it? Honestly, the only reason I've ever considered going to one of these (ever since I gave up on my dreams of blogging greatness - in other words, pretty early on), was because *when* are you *ever* going to persuade a bunch of fabulous women, many of them moms, to take a weekend for themselves all at the same time and somewhere at least 200km from Parliament Hill?

But then, you know, the whole social-bi-polar thing takes a swing back to the pathologically-introverted end of the spectrum and the just the thought of tweeting along from home scares the bejeezus outta me.

StephLove said…
I've never been to a blogging conference and I probably never will (like you, I don't think monetizing it is ever going to happen) but it would be fun to meet bloggers I read (including you of course).
October 9, 2013 at 6:43 AM

Courtney said…
Our group WAS the best one! Yay for Organic Vomit Party!

Maria said…
I have never been to a BlogHer but have a friend who did. She had mixed feelings. Said that it was part genius/part melodramatic idiocy. But..she did meet some spectacular people.

I blog for my daughter, for her to have something of me when I'm not here anymore, to know what I was really thinking when she had her first date, her first big disappointment, her whatever.