September 04, 2013
Saturday was bright and sunny. We headed back to the ballpark early. 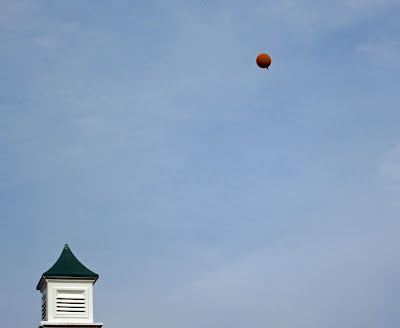 As we were milling around trying to figure out how to arrange ourselves, someone called out my name. It was a girl I played trombone beside in high school band. She and her husband are big sports fans, and they had decided on the spur of the moment to road trip down for the week-end game, and someone on Facebook told her that my son was in it and she should look out for me.

THAT was trippy. Also, yes, I realize I freaking SUCK at dressing for baseball games. None of the Canada shirts at the gift shop were sleeveless, and it was HOT. 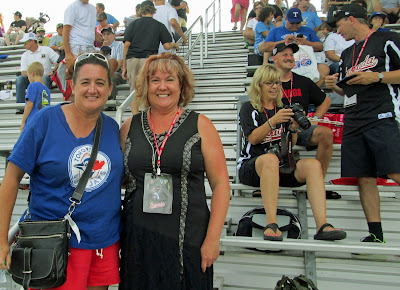 We met some fun new friends, but they had to go. 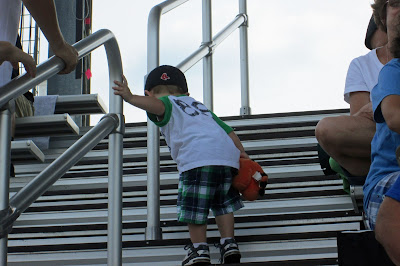 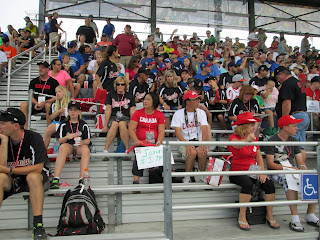 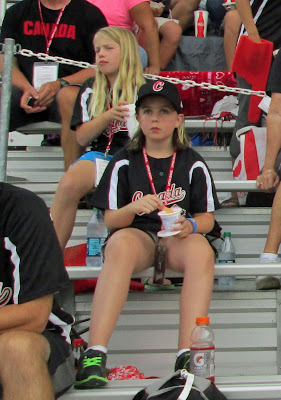 So we went looking for some amusement. 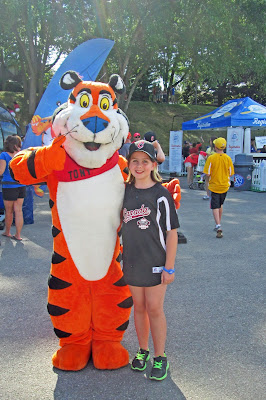 Then we went to investigate the Honda games. 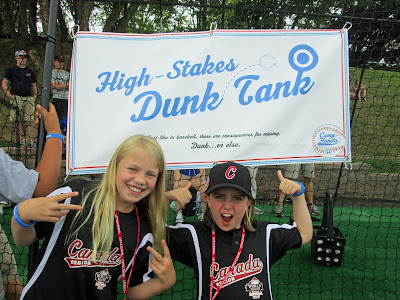 Eve did not dunk the man in the tank. 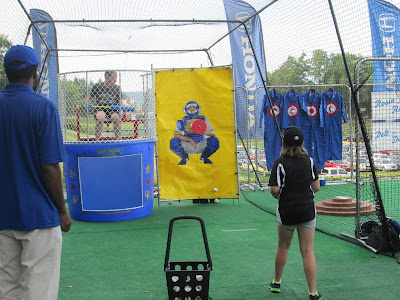 The man in the tank, however, did shoot Eve with a big-ass water gun. Which was fine, because like I said, it was hot. 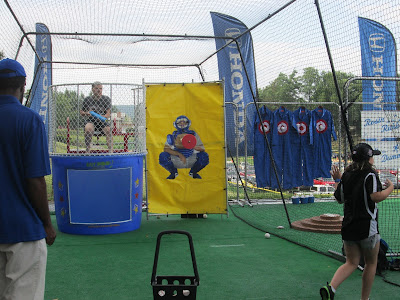 Then they went to play musical car seats. 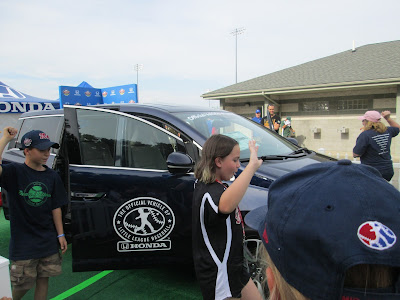 They didn't care about being entered in a draw for a Honda. 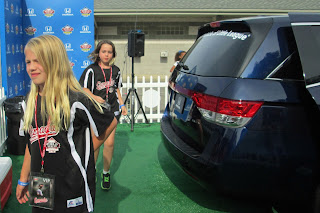 They wanted one of them to win because whoever won got a pie in the face from someone of their choosing. They didn't win, but it killed some time anyway. 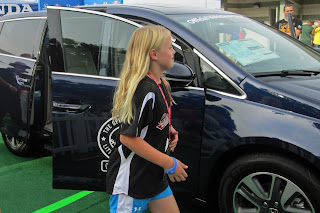 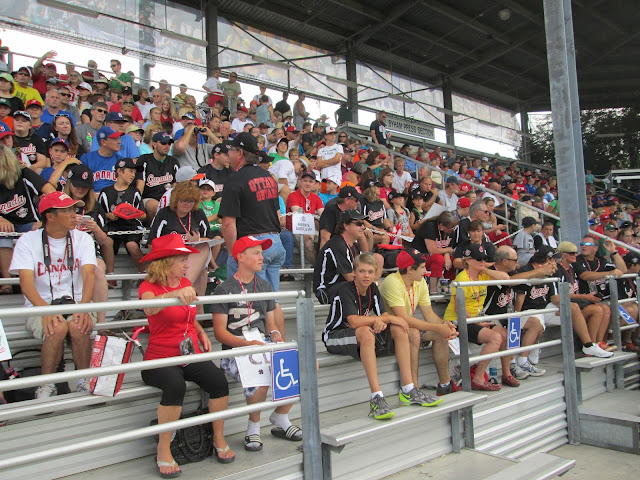 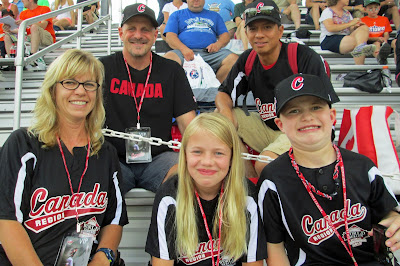 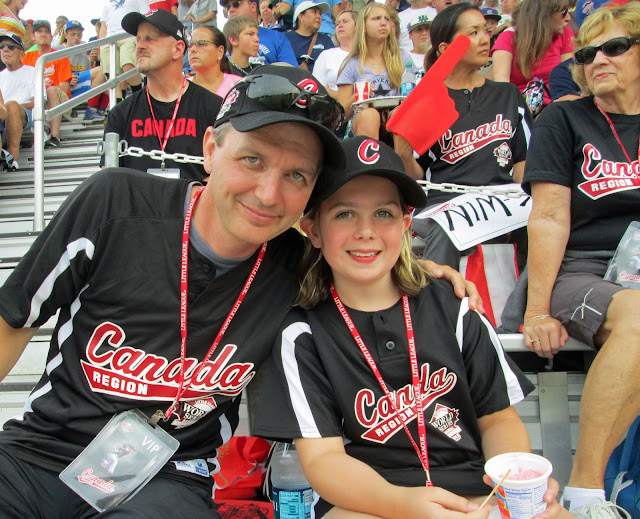 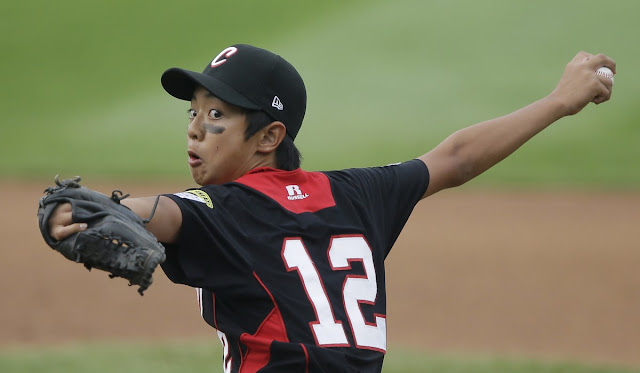 
Davide Disipio, a kick-ass first baseman who is willing to stretch himself to the point of pain for his team. 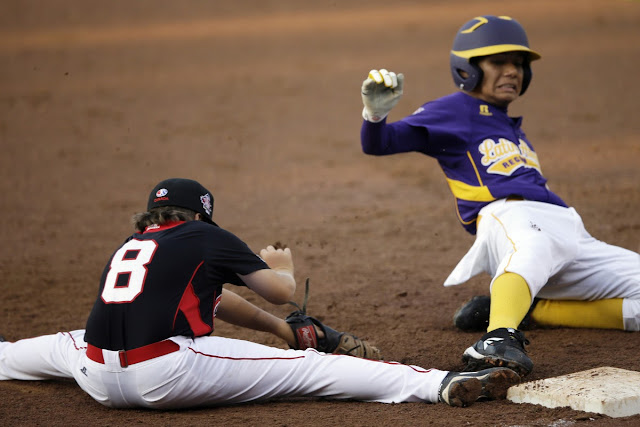 Angus hit his second home run of the series. By this time, the ESPN guy was just calling me "Mrs. Angus", and the cameraman was right in my face every time Angus was up at bat. Saying "pretend we're not here". Uh, okay. Would you like a gummy worm? 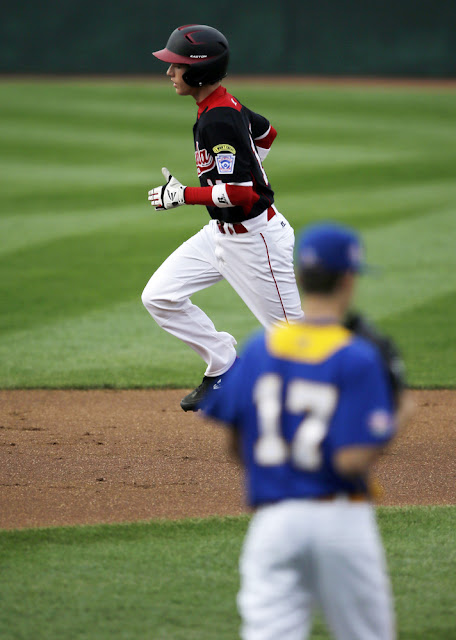 This kid hit a home run too. My sister, watching the game at home, heard them say that he and Angus were the only two in the games that had hit two home runs so far. I'm kind of glad I didn't know that at the time. But look at this face. I'm pretty sure he's the Czech team's David Legault. 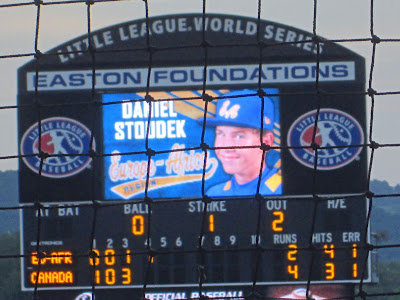 It was a really close game. We weren't hitting up a storm. In fact, the win came down to two successive runs for home plate, neither on hits. This is David Legault's patented trick - you have to slide in feet first, but he simultaneously reaches around and hits the plate with his hand before he gets tagged. The home plate umpire called him out, but we appealed and they viewed the instant replay and called him safe. 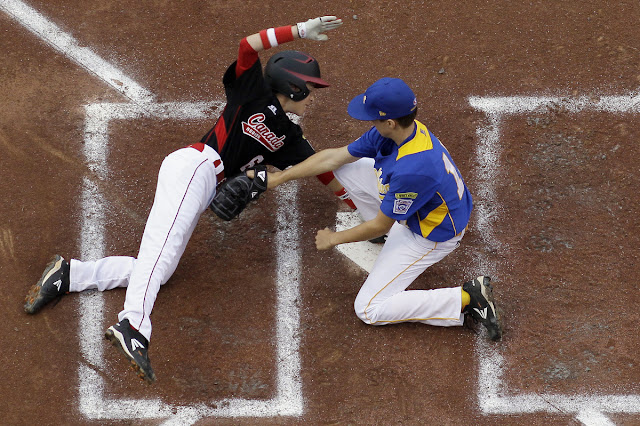 If you'd like to watch the video clip of it obsessively for a bit like I did, feel free. It's really effing close.


And then it happened again! David had run on a passed ball (which means the pitcher threw a wild pitch that the catcher missed, and David ran while the catcher was fumbling for the ball). Angus just ran after the pitcher had the ball back and wasn't paying quite enough attention. The head coach made eye contact with him and said "it's there if you want it". He wanted it. The home plate umpire called us out AGAIN and we appealed AGAIN and when he came back and called Angus safe he just started laughing. 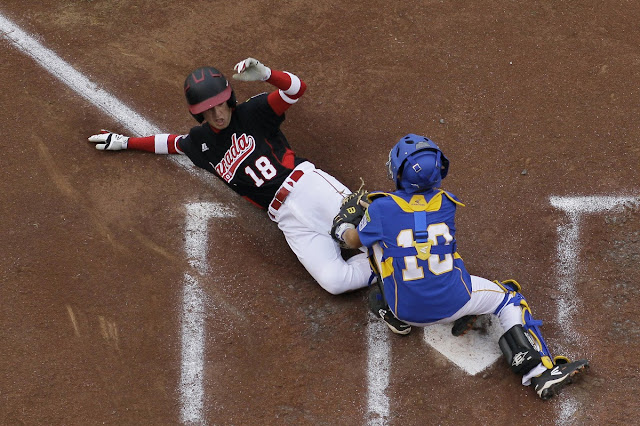 
After that, things got really tense. This is Tiffany, the head coach's fiancée: 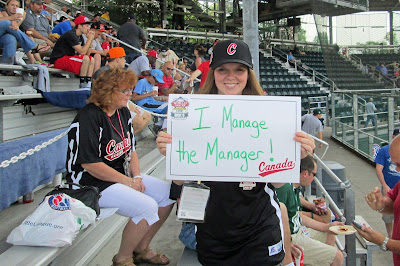 She said she was looking for somewhere to vomit. I was squeezing the shit out of Eve's hand, when I wasn't stress-binge-eating popcorn and ice cream. It's terrible to be thinking "strike this motherfucker out" when the motherfucker in question is a twelve-year-old kid. In the games where we lost badly, I felt bad for the kids but I was fine. In this game, with the chance of winning, I felt like I might die.

The last time a team from Canada went to the LLWS that wasn't from BC, it was 2004 and they were from East Nepean. They didn't win any games in the actual tournament, only a consolation game. So this? This was pretty cool. 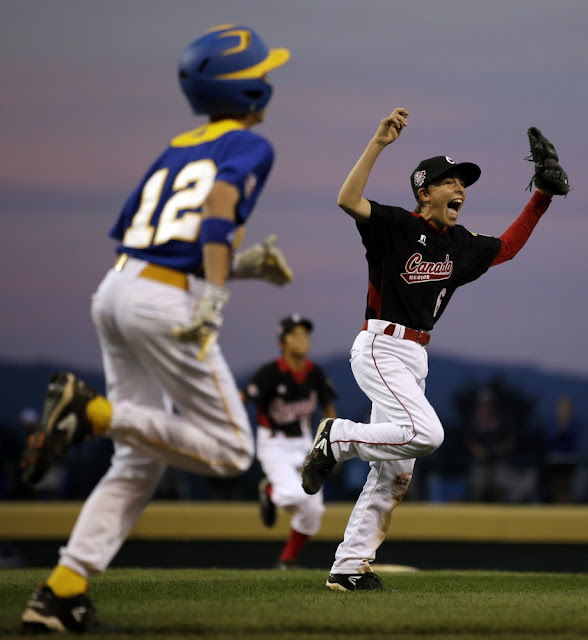 Mary Lynn said…
I just have a great big grin on my face reading that, just like I had when we watched them win that game on TV. Love hearing what it was like to be there. What an experience!
September 4, 2013 at 5:07 PM

Lynn said…
That is just amazing. I am just so proud of Angus and all the boys. I totally am authorized to speak for all of Canada, too :).

StephLove said…
I admit to having hoped children on opposing teams in considerably less high stakes first grade basketball and soccer games would fail. I think as long as you don't verbalize these thoughts, you're okay.
September 5, 2013 at 4:26 AM

Julie said…
i would have been a complete stress ball and would have been yelling "strike the mother-fucker out!" instead of just thinking it. good thing the jellybean doesn't show any propensity for sports. i'd be THAT mom.
September 5, 2013 at 5:58 AM

Nicole said…
Things I love: "would you like a gummy worm?", "Strike the motherfucker out." and "squeezing the shit out of Eve's hand."

I felt like I was there! I probably would have been having heart palpitations and sweating.
September 5, 2013 at 10:30 AM

Kimberly said…
Boom goes the Canadian bacon.
Seriously though. These kids are spectacular. To get to that point where you're competing against the world? That takes so much talent and dedication.
So strike the fuck out man. Strike. OUT
Ps. After missing the target and then getting hit by a water gun, I totally would've just walked to the target and pushed it.
I'm a jerk like that
September 8, 2013 at 11:33 AM

Bibliomama said…
Eve TOTALLY said she was going to do that. I would have helped her run away after.
September 8, 2013 at 6:21 PM

I can't even imagine..I'd be losing my mind. Good job having your mind still intact enough to write witty blog posts!

Someday I hope you and Eve do a road trip and write about it on your respective blogs because I think that would be so fantastic.
September 9, 2013 at 10:50 AM