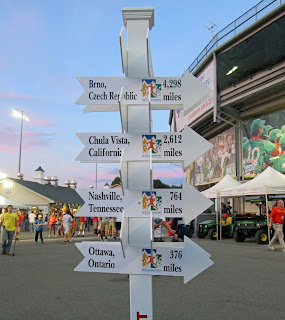 We got there early enough to see Angus and Jack do their close-up for ESPN. 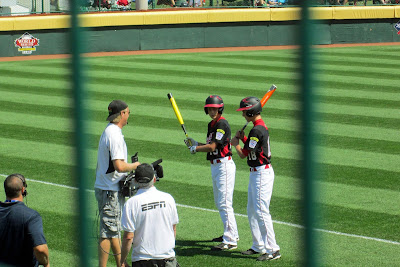 Aren't they cute? Hundreds of teen-aged girls certainly thought so. 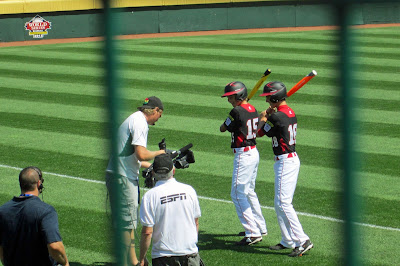 Angus led the team in some warm-up exercises. 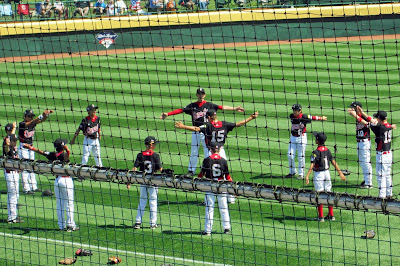 Sure, they look little and cute, but don't let that fool you - they're small but deadly. 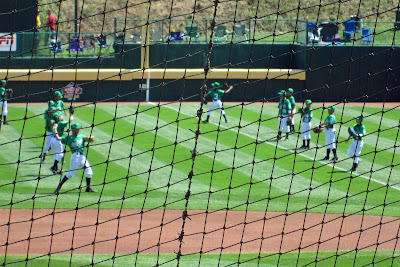 We had VIP passes and a roped-off seating section, but there weren't enough for everyone's immediate family and everyone extra who came, so we would get there crazy early for every game and sit all around the VIP section to save seats for all the grandparents, aunts and uncles and cousins, then go down to the VIP section when the game started. 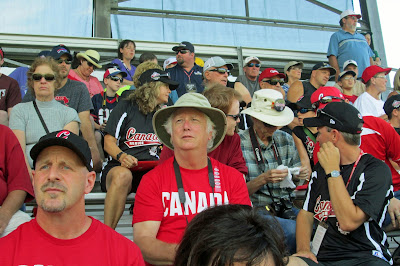 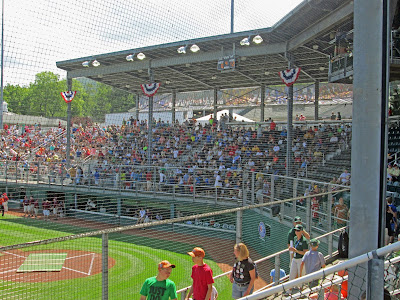 Isn't this crazy? This is crazy, right? We're at the Little League World Fucking Series! 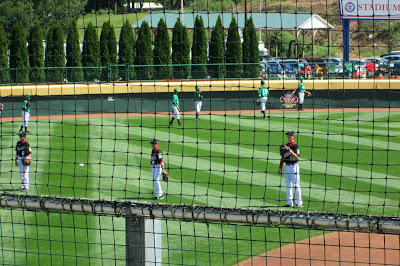 Look at the size of this goddamned scoreboard! 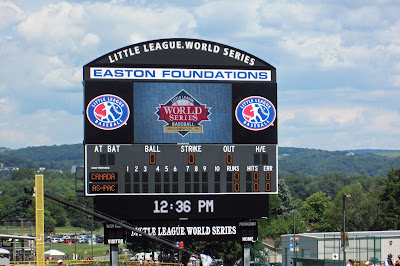 I bet you can guess why Eve found this so amusing (Ass-Pac! Ass-Pac!) 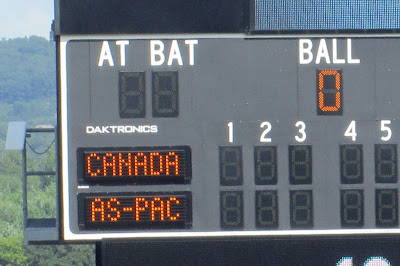 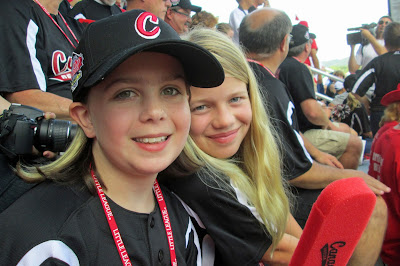 Before their first game, they were awarded medals for making it here. 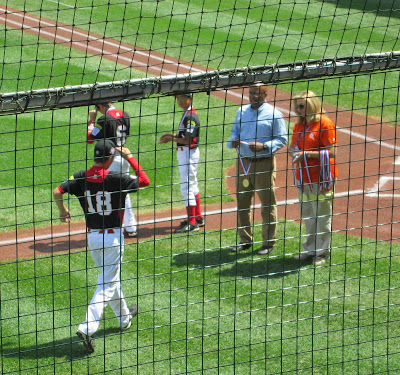 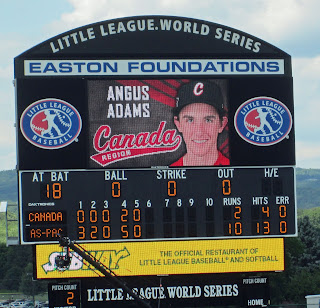 Angus was the starting pitcher for this game. Honestly, his pitching didn't work out the best in the series. There were a few reasons for this. He was nervous, of course. When I got home and was able to watch the game, I could hear what the head coach said to him when he came out to the mound. After one of the Taiwan kids hit a home run, Mark said "you threw a good pitch, and a good hitter smacked it; it happens", which made me love him even more. He only let Angus pitch enough that he would need two days rest instead of four, so he could pitch again in their third game. I was worried about how Angus was feeling, since he's kind of like me - you can read every emotion in his face. I knew he was upset when he went off. 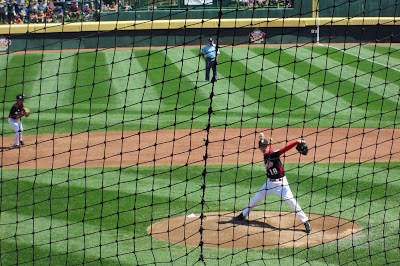 So it was kind of nice that he smacked a two-run homer in the fourth inning. We knew this team would be good, but our guys still got on the board, and it was because of Angus. 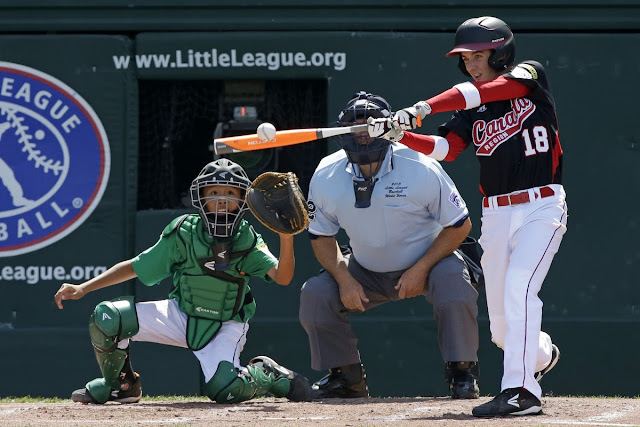 photo credit: someone I don't know, we found this on the internet


His teammates were very happy with him, despite the fact that, to all appearances, this one is trying to pull his head off. 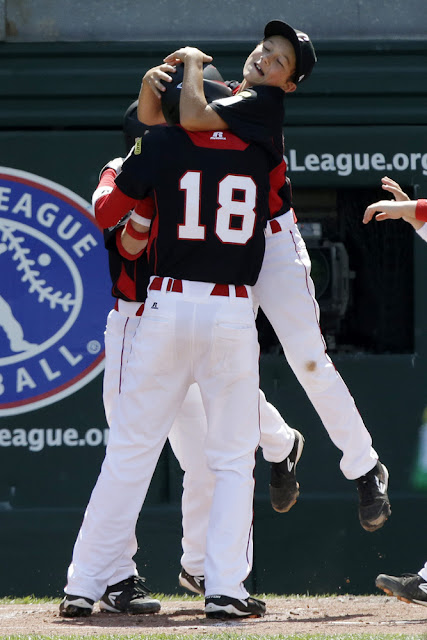 photo credit: someone I don't know, we found this on the internet too.

So, that was the first game. The boys were a little despondent, but basically okay. It was nice that we didn't get mercied. We figured they could regroup and see what they could do in the next game.

We went out of the ball park gate and got mobbed by a bunch of girls. One of them asked if we knew when the players were coming out. Matt explained that there's a tunnel they go through and that they get bussed right from underground back up to the dorms behind the gates. One of the girls looked at us in complete bewildered dismay and said "WHY?" Oh honey.

So we walked up the steep staircase (the way the ballpark is down in a valley-type thing is really cool, but I kept wondering if it was just geographical happenstance or a way to make sure that the groupies had to work a little harder to get up to where the players are.) We saw Angus, who seemed okay. We were going to go out for dinner with Matt's father and brother, but Angus was a)tired and/or b) just wanted to hang with his teammates, so we gave him some money for food and decided we would all drive back to Grandpa Mike and Jeremy's hotel and then all go for dinner in our van. We got there and picked them up, and started driving. After some whispered conferring in the back seat, Grandpa Mike announced that we had to go back because they had left the key to their rental car in the car - but at least this meant the keys weren't locked IN the car. Matt rolled his eyes and turned around. We got back to the hotel parking lot and Jeremy retrieved the keys. Grandpa Mike said "well that's good. I'd hate to lose my GPS". Jeremy looked at him totally deadpan and said "or the whole car, Dad".

We got to the restaurant and I got my first clue that Eve had had too much ballpark crap food when she looked at the menu, then closed it and said wearily, "I think I'll just have the salad bar." We all had the salad bar, but Matt only got it because the salad bar had a view of televisions that were playing the other games and highlights from the day (any time we weren't watching a live game that week we were usually in a room with a game on the tv). We were almost finished eating when a man came up to us and, looking at Matt's Canada jersey, told us we should be proud of how our kids had played today, because they had been up against a team who could win the whole thing. That was nice.

We dropped off Grandpa Mike and Jeremy and went back to the hotel. Our night time routine at the hotel usually involved locking Eve in the room to have a shower while we had beers in someone's room, then going back to tuck her in before going back for more beers. If she needed us she just had to walk down the hall. This became even more appealing for her after her consoling statement to Angus that "just think - it could have been BC here losing that game instead of you guys" made her famous and revered among all the other East Nepean parents.

Shirley in Halifax said…
I love reading this day by day play-by-play. The whole wonderful week comes alive again. The things Coach Keeping said throughout were always so great...I loved him by the end too.

Mary Lynn said…
I am so enjoying reading your Little League World Series journal posts! That must have been so cool and so surreal seeing his face up there on the big scoreboard. I know that first game was a bit rough, but manohman. Just the experience of it all. Wow.
August 29, 2013 at 8:17 PM

Hannah said…
The little girl groupies!! D'awww. So cute. So unashamed. So "what-on-earth-would-they-do-if-they-found-the-players". I love it.

I've run out of superlatives for how caught up in this whole story I've been. That picture of the scoreboard just ended me. *sniffle*
August 30, 2013 at 4:26 AM

Julie said…
The World Fucking Series! I am still telling people that the mom of the starting pitcher for Canada is my friend! That score board is crazy awesome!! I want more!
August 30, 2013 at 8:49 AM

Nicole said…
The groupies, they kill me. WHYYYY?