So apparently this is why the Little League World Series (for the 11 and 12 year olds, which is the one that people really get excited about) takes place in South Williamsport, Pennsylvania every year. 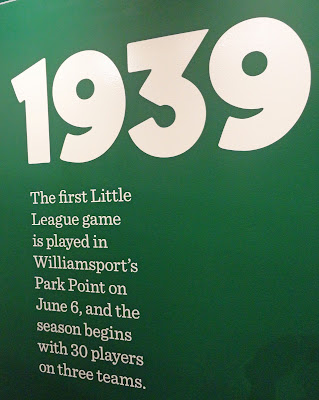 You drive by all this before you drive down to the parking lot for the ballpark. 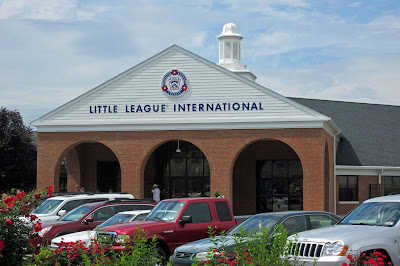 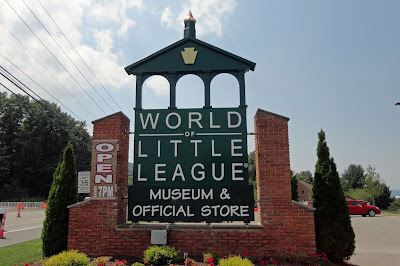 Our team was at the batting cages as we were walking up to security. 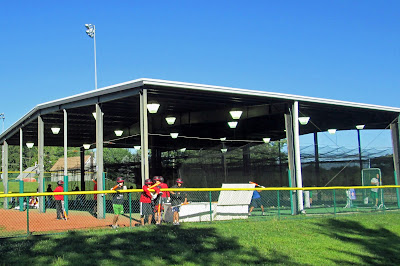 Angus was at pitching practice. 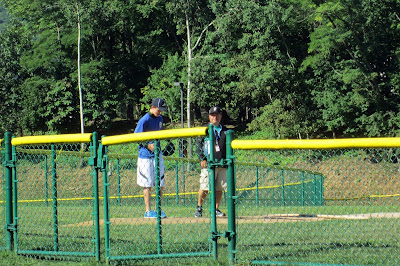 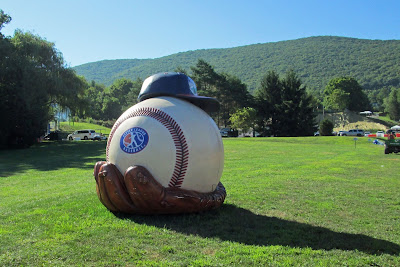 We had to go to a parents meeting first thing in the morning. The gist of it was, your kids are safe and happy here but you're not going to see them much, and during the games you'll most likely be on television, so don't swear or pick your nose or flash your boobs. 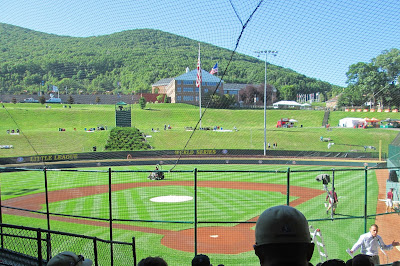 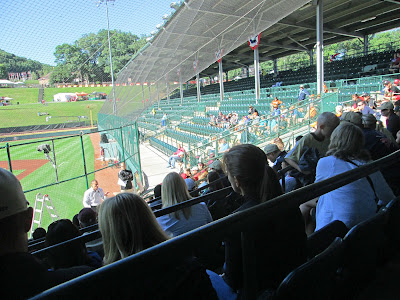 After anything happened on the diamond, people would come out with rakes and paint and watering cans to make it all perfect again. 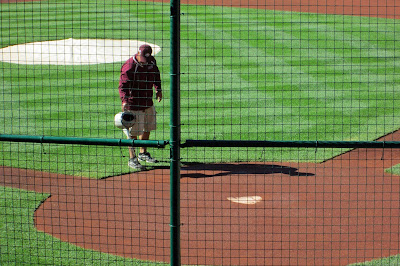 Eve before her trip to the gift shop. 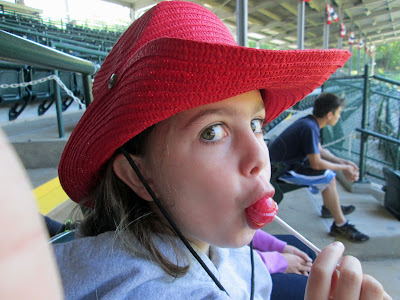 Eve after her trip to the gift shop, with Cassidy, the sister of another player. Remind me to send Cassidy's mother a gift for bringing the only other girl. They had a blast together. 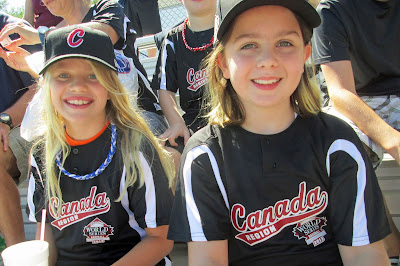 Opening ceremonies were after the meeting. 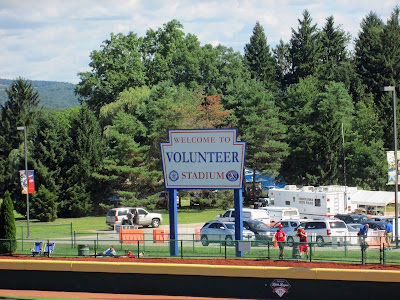 People with the flags of all the countries who play Little League came in. 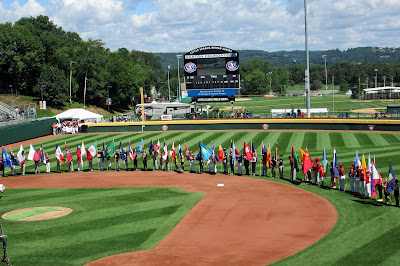 Then the teams came in. 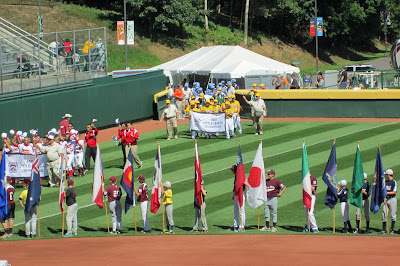 Our guys! Still VERY FAR AWAY! 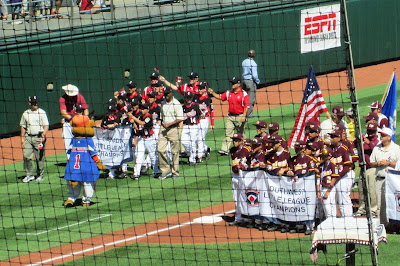 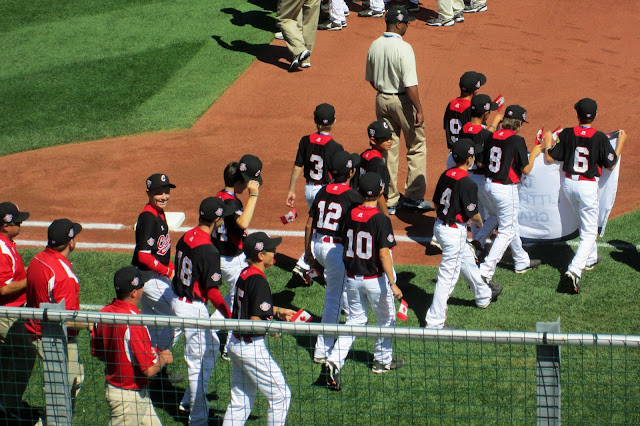 They made a pretty cool mosaic. 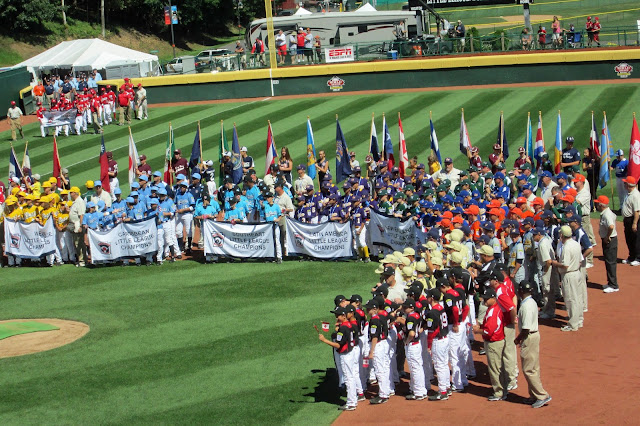 The Little League Pledge was said in a bunch of languages, and the Coach's Pledge (which mostly rang with sincerity except for maybe the part about respecting the decisions of the umpires). 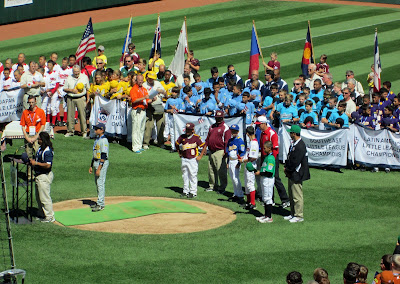 Then they left. Then we walked up a very long, steep hill to finally get up close and personal with 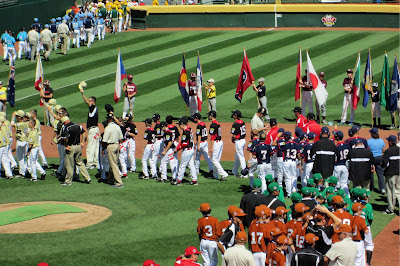 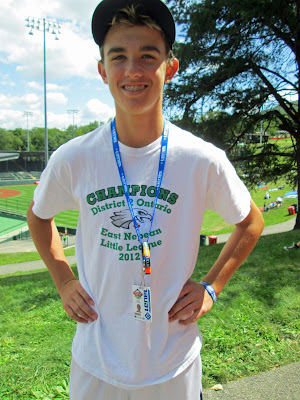 I had ordered him to look like he was happy to see us. 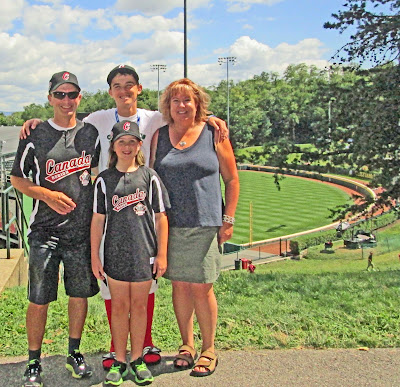 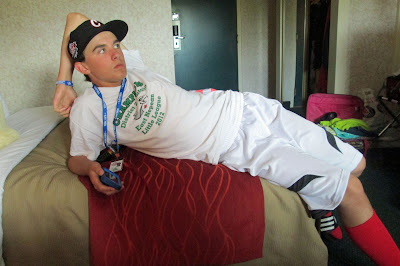 Not to mention his innate sense of fashion. 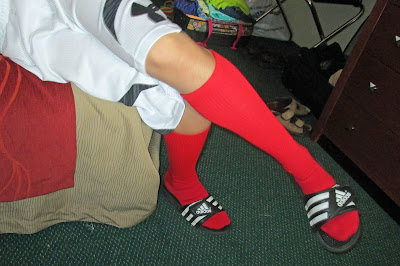 We went out for dinner with another player's family, where Angus ate two appetizers and a huge pasta dish. He said he wasn't all that crazy about the food in The Grove cafeteria, which made me hopeful that, if nothing else, he'd be happy to come home to my spaghetti. 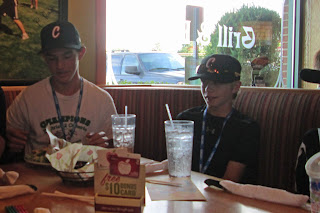 After dinner, we went back to the ballpark, dropped off the boys and watched some baseball in the big stadium, from the hill by the dorms. 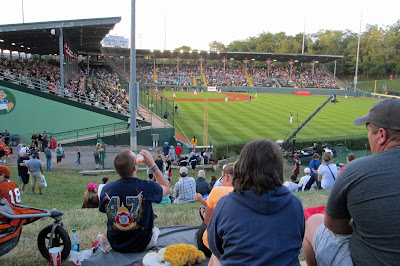 Eve and Cassidy were especially intent on the game. 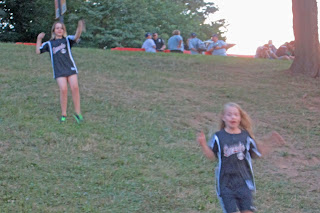 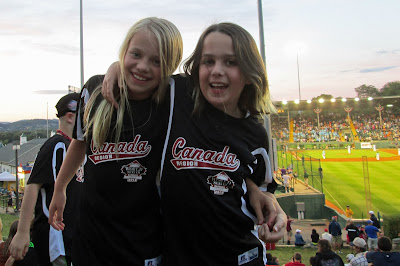 StephLove said…
He's twelve? I thought he was thirteen. (Maybe he's almost thirteen. I have his age as "a year older than Noah" in my head.)

Patti said…
I love your captions. You are one hilarious broad. I'm so glad you had a good time.

This is ironic coming from me, but I find sporting events that my kids are in to be very stressful. I love that they do it, but I get so anxious on their behalf.