June 19, 2013
It's been a great few days, and a draining few days, and I'm feeling actively repulsed at the idea of blogging, but APPARENTLY I'm supposed to push past the aversion and not just consider it nature's way of giving my readers a rest, so I thought I'd share a brief anecdote about Saturday, which was, no big deal, MY BIRTHDAY.

I was putting some finishing touches on the cupcakes for MY BIRTHDAY party, and the phone rang. I looked at the display and saw that it was my sister calling. I love my sister, and I consider us close, but we don't talk on the phone a whole lot - neither of us are big phone people. Every month or so we have a marathon session and then we leave it for a few weeks. And we'd just talked last week, so while I was picking up the phone I fleetingly thought "I wonder why she's calling", and then immediately, "OH, of course, she's calling because it's MY BIRTHDAY, and she's perfect and organized and competent and ALWAYS remembers everyone's birthday and calls them on the right day, whereas I tend to remember that it's someone's birthday in the middle of the preceding night, determine to call them, and then forget until the middle of the succeeding night, and I end up calling them seventeen days late and sending a present a whole season or two off. It's just who I am. So, I answer the phone, rolling my eyes, lovingly.

We talk for a while. We make some plans for when I bring Eve down to London this summer and her kids come back here. She tells me a story about her friend hitting a moose while driving on the highway late at night with her baby and elderly mother, and my sister having to go over to the house to wake up the drunk, sleep-deprived husband to go pick up his wife, except then he passes out and hits his head on the floor and she ends up having to take care of him while an estranged uncle goes to pick up the wife. Then I say something about cupcakes.

She says "what are you making cupcakes for?"

I say "my birthday party".

She doesn't say anything for a minute. Then she says. "Oh great. I just did that thing you always do, where you call someone ON their birthday but totally FORGET that it's their birthday." And she felt like an ass

(Although I like the bracelet too. Which she sent early. Bitch.) 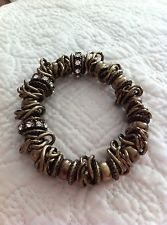 Anonymous said…
Best. Blog Ever. Because ... I made a mental note on Thursday to call you Saturday to wish you a happy birthday. And then on Sunday I realized I had forgotten to call but I was only a day late so I could still be a good friend and call cause hey, same weekend, and then the kids distracted me and I forgot and now I've been feeling vaguely guilty all week. So, you know - Happy Birthday. Love and hugs, Zarah
June 20, 2013 at 7:38 AM

Nicole said…
Okay, that's awesome, not just your sister's very excellent and juicy story, but also the phone call. Picture of the bracelet?
June 20, 2013 at 8:43 AM

StephLove said…
I'm the other sister in this scenario. Just had to confess. My sister this year sent a box containing b-day presents for J (late March b-day), N (early May b-day) and me (mid-May b-day). It arrived pretty close to my b-day.
June 21, 2013 at 8:58 AM

Finola said…
Every time I read one of your posts I become more and more convinced that we're twins. I hate the phone, always remember people's birthdays the night before and the middle of the night after, and I would be pleased if my more organized friend (I don't have a sister) called me on my birthday but forgot it was my birthday.

clara said…
What a pretty bracelet!

Shan said…
That is the best! I have a similar story, my 30th birthday and my brother calls, but he hardly ever remembers to call on my actual birthday so I was excited. I am the birthday rememberer in this family. I say hello. He says, do you have my copy of Get Shorty? (yes that movie with John Travolta and on VHS no less)I say no. He says okay, bye. And that was that. He called me three days later to ask if he had indeed called me on my 30th birthday to ask for his copy of Get Shorty and then hung up. Uh huh. Too funny.
July 15, 2013 at 11:24 AM