Fear and Loathing at the National Gallery

June 06, 2013
Kim was in town for the week, it was a beautiful day and I had been away for the week-end and missing my kids. Angus had to go to a track meet, so I kept Eve out of school and we went downtown to meet Kim at the National Gallery. Kim is one of those people who doesn't have or want children, but has a gift for talking to them without sounding fake or forced or like she'd rather be doing something else. Eve always enjoyed hanging out with Kim, and she loves art. And you know, there are many times when Eve displays a maturity and perceptivity far beyond her years.

This was not one of those times.

Kim said she really wanted to see the Drawings and Photographs because she always leaves them for the end and then doesn't have time for them, so we started there. There was a lot of contemporary aboriginal art, including pieces by Annie Pootoogook, which makes me sad because she's been in the Ottawa newspaper several times and I know that her living situation is heartrendingly bad - addiction, homelessness while pregnant, having her baby removed by social services, just a long, sad list. 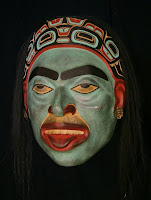 Some of the other artists featured were Jessie Oonark and Pitseolak Ashoona. Eve said "everyone in this room has a lot of Os in their name." She wandered off on her own and then came back and said there were scary pictures over there. One of them was called Angry Face (by Jutai Toonoo - more Os) and it was kind of scary. Then she showed us an oversized carved mask by Beau Dick and said "if this was a tv show, everyone would look at this mask and then go bonkers". Then she observed that the artist's name basically meant Pretty Dick and skipped away giggling.

She returned in a couple of minutes looking faintly disgruntled, saying "Why can't they just take pictures of people with their clothes ON?" I explained that when people are learning to draw anatomy properly, it's easier to learn by drawing people without clothes on. She wasn't impressed. I had to up my game when we came across three photographs by Shigeyuki Kihara, a transgendered Samoan photographer - one where she looks like a beautiful woman reclining on a couch in a grass skirt, then without the skirt still looking like a woman, then without the skirt and a penis showing. I explained about transgendered people, and how some cultures are more accepting of them than others, and how when cultures were first meeting the photographers were usually men who sometimes objectified women, and this was the photographer's way of presenting herself in her way instead of in a male photographer's way. Kim said I did okay. I told Eve maybe we should go look at some old European paintings of pretty buildings, since she'd probably had her fill of contemporary art. She said "does 'contemporary' mean 'naked and scary?'" On the way out we ran across a video of a naked woman writhing in the dirt. Eve said she wished artists could subvert the male gaze less nakedly and without slithering being involved. 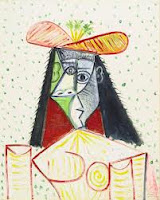 The European thing went fine until we ran across some naked Greek goddess painting and Eve deadpanned "yay, more boobs". The Abstract gallery was better - she loves Picasso. I was trying to figure out how many people were in one statue and she said "it's abstract, Mom, there might not BE an even number of arms" which made another guard snicker. She then asked, before flopping down on a bench, "is this art, or can I sit on it?"

As part of the Indigenous art Exhibit on right now, there is a truly impressive stack of blankets that spans the two floors of the gallery. We saw it from the top floor and we went to read the explanation before we left. There was an older man on a scooter sitting in front of it. As we approached, he said "need a blanket?", in a way that showed that he was really cracking himself up. He then motored away on his little scooter, which made us realize that he had been sitting there just waiting for someone to come along so he could make his joke. We found this inexpressibly heartwarming.

We then wandered around the market for a while and went for gelato at our favourite gelato place. It was a great day, especially once we got to a place where everyone kept their clothes on.

Today the grade fours from Eve's class got to go to her friend's class because the grade fives were learning about puberty. When she came back and asked one of the boys how it was he said he wasn't going to be able to sleep tonight. She said she knew how he felt.
blog friends Eve of destruction funny shit my kids say happy days

Hannah said…
I was hoping to visit the National Gallery this summer. This post reminds me that I need to go alone. :p

Rachel Cotterill said…
Sounds like quite the ordeal... I love art galleries but I like to take it at my own pace, so going with anyone else can be a bit stressy. Let alone with an inquisitive child ;) I, too, love chatting with kids in general - but maybe not so much about "scary naked" art. Though I did have to explain the concept of transgender to a group of seven-year-old brownies. I bet their parents loved me.
June 11, 2013 at 7:44 AM