I'd like to pretend that I'm more, I don't know, noble or sensitive or exquisitely attuned to the suffering of the world than I actually am, and claim that I've been struggling this week solely because of horrific things that have happened to other people, but that would be a lie, and I've sworn to myself that I will never lie to you unless you ask me how much I weigh or whether I still watch Grey's Anatomy. I think it's just my old stupid seasonal transition difficulties. I didn't have a very busy week, so I thought I should either tackle a satisfying project or two that I had been putting off or engage in some hardcore goofing-off - watching movies all day, or reading a whole book while the kids were at school, or something.

Instead every day was just a total non-starter. I couldn't settle to anything - I didn't even manage to wallow slothfully with anything you'd call success. I walked on the treadmill every day, but other than that I just kind of wandered around not being able to figure out what to do. I went to the mall to get Eve some new pajamas after realizing that her pajama situation was similar to the underwear situation described in this post - actually I didn't even realize it until my husband pointed out in a rather pained fashion that her pajama pants ranged from too tight to be remotely comfortable to falling apart. I bought Angus some jeans at Old Navy because he's too unsophisticated to like the insanely cool jeans I bought him at the Guess outlet at the Train Yards ("the legs go out too much at the bottom!" "They look cool like that!" "No they don't!") but the ones I bought him were "too skinny" - my son is the freaking Goldilocks of pants. I have to return them and attempt to obtain a pair that are Just Right, and hope he doesn't get eaten by three bears.

I didn't really feel like cooking. I didn't really feel like reading. I fell asleep early enough but waking up was miserable - Matt was in Sweden, but usually the first few days are great in the morning and it's only the end of the week where I feel dragged out. I was trying to read this, but I couldn't even get through a paragraph without feeling dense and dopey, so I stuck with a sort of lacklustre mystery novel, but mostly I watched Buffy on the ipad every night and then just read a few pages before falling asleep, which is really intensely catastrophically not like me.

Then Pam and I went on a road trip yesterday to the UPS Store in Ogdensburg New York. We checked our passports multiple times to make sure the pictures and expirations dates hadn't magically changed to pictures of wanted criminals and dates far in the past. Crossing the border was the usual - even when they're nice they're not nice, you know? We had a fabulous lunch at a restaurant called The Dirty Gringo, because I had found good reviews online, not because it looked nice, because it didn't, when you pull up it looks like a little shack where you'd worry about the bacteria count and the likelihood of getting in a fight with a biker. But the staff is charming and the food is amazing, especially the spicy black bean cakes. Then we came back over the border, which is usually better because, you know, Canadians, but it wasn't - the guy looking at my receipts was convinced I was trying to pull something. It didn't help that the packages were mostly Lands End kids' bathing suits but there were two items for me from Fresh Produce - his eyebrows shot right up, and then I couldn't stop thinking about my sister imitating some guy on tv saying "we should be worrying about weapons and instead we're just asking people if they've got any fruits" and then I had to bite my lip to not burst out laughing, which I was pretty sure would get me and Pam tied to chairs in a locked room somewhere, and then I started thinking about how I could spin this into a really good blog post or possibly a Penthouse Forum story, and then he sort of threw up his hands, gathered up all my invoices and threw them at me, like "I know you're engaged in spurious behaviour but I don't feel like breaking out my handcuffs right now, so go away".

Then Matt came home today and the kids came home from school and we spent a couple hours in the family room trying a pencil experiment that Eve had heard about and arguing about what constitutes an irregular verb in English and trying to get Angus to show us his muscles and then Matt started trying to play Eve's piece on the piano and she started hurling invective at him, and for a moment I felt like we were one of those charmingly madcap sit-com families. And then Matt went out to a baseball coaching clinic and Eve and I were trying to decide what else we could give her best friend for her birthday party tomorrow - we have a cool Minecraft shirt from Redbubble, but they gave Eve a ton of moustache stuff for her birthday so I wanted to add something, but she's not at all like Eve, so books or music stuff or art stuff were out, and finally Eve reminded me of what her friend loves most of all, so I've spent the last few hours making fancy bacon. 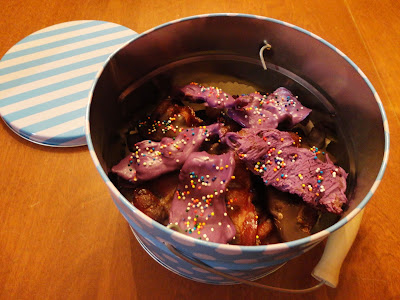 And I feel better.

Sarah McCormack said…
i had a wierd week too.let's blame it on the weather. and no new episode of Gray's Anatomy, which I still watch :)
hope next week is better, in ever way!
April 20, 2013 at 8:19 AM

Lynn said…
That bacon is blowing my mind. It has restored my faith in humandkind.

Ms. G said…
"my son is the freaking Goldilocks of pants" Tee Hee

Sasha said…
Oooooohhhhhh fancy bacon. I knew I shouldn't have clicked on that link. But just the prospect of putting that in the oven makes me feel better. So thanks - I think.

Sorry to hear you had a rough week. I totally know what you mean - that listless directionless nothings-right-even-though-nothings-wrong feeling. It's almost as bad as that I-cant-figure-out-if-hyperhyphenation-should-use-apostrophes feeling. (Which comes a close second behind the first place tie between should-hyperhyphenation-have-a-hyphen-iphilious and the rarely diagnosed parenthetitis.)

What was I saying? Oh yeah - if you want more company to the UPS store, let me know. I keep meaning to do that but never have.

Actually, what I think I was saying had something to do with expressing sympathies about your crappy week. Amazing how quickly I stop talking about you and start talking about me, isn't it?
April 22, 2013 at 9:45 AM

Rachel Cotterill said…
You should make him shop for his own jeans if he's going to be that picky. He'd soon learn to be more like most men (and me!) in just wanting to get out of the f****** shop as quickly as possible ;)