February 26, 2013
Every year we have trouble getting down to Winterlude. It begins right around Eve's birthday, and by the time we're done planning and executing the party and family celebrations and remember about Winterlude, it often seems like too big a hassle to get ourselves downtown. If anyone's wondering, yes I do realize this makes us lame and loserish - I comfort myself with the fact that we have never claimed to be otherwise.

So this year, my lovely husband used some of the air miles that Air Canada keeps throwing at him in the hopes that he'll, I don't know, not quit travelling an insane amount for the sake of his marriage, to book us into a downtown hotel last week-end so we could partake of Winterlude festivities (the draw for me and him) and then retreat quickly and easily to hotel facilities (the draw for the kids).

There's something so decadently luxurious about staying in a hotel in your own city. The view is familiar, and yet not: 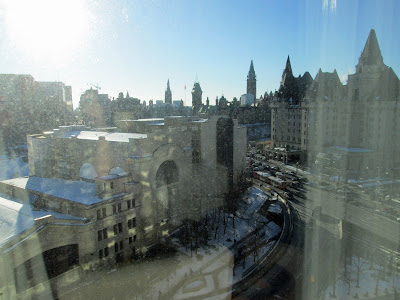 We went out and walked on the canal - usually Matt and Angus skate, but this year we realized that Angus not playing hockey meant we had failed to keep his skates current and they were too small. 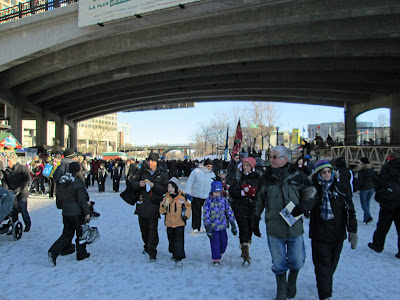 We probably had slightly less fun than this kid: 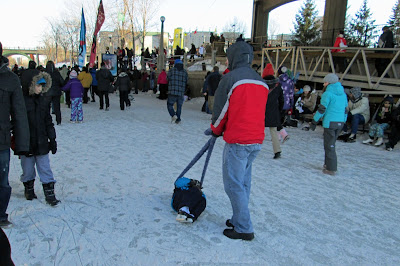 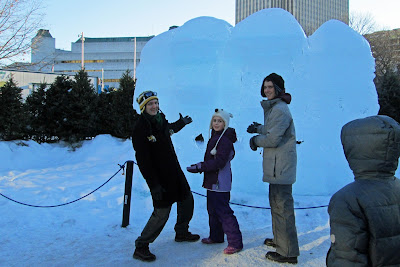 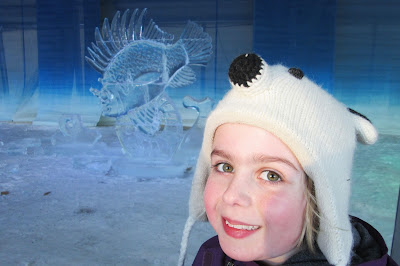 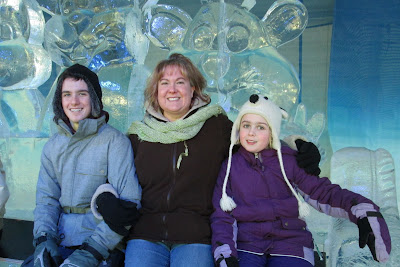 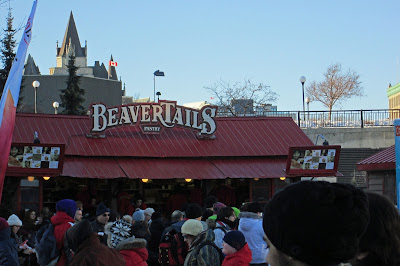 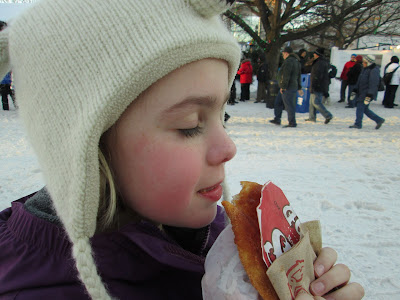 Kids were supposed to bounce in these and imitate water droplet motion or something. Half of them were broken when we walked by the second time. 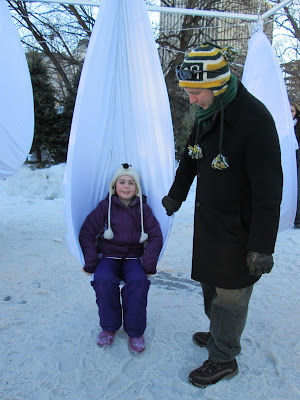 (Cheesy photo op #3, otherwise known as "pretend you like each other or we'll beat you".) 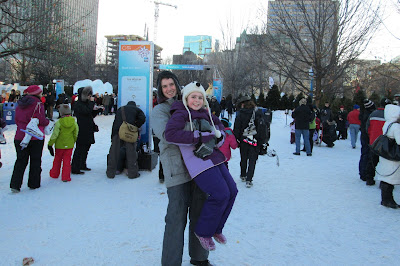 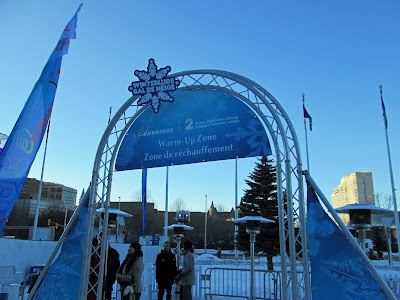 Seriously. We had to drag him away from the heater. 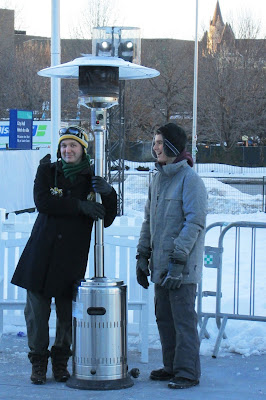 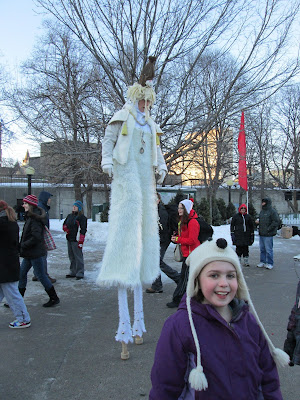 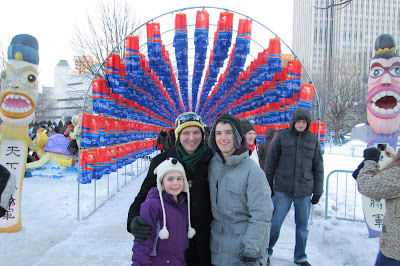 This was cool. We said we should come back at night when they were lit up, but we knew we weren't going to. 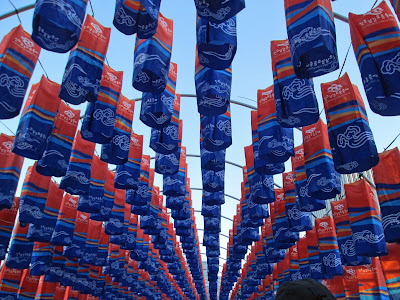 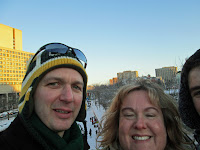 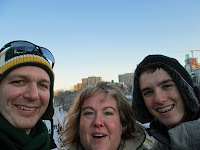 Then Matt once again demonstrated his superior skills at getting a family photo, until a group of strangers took pity on us and got one with Eve actually in it. 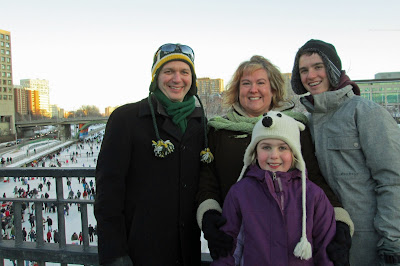 Then we went out for dinner, went swimming in the hotel pool, and repaired to our respective rooms to watch hideously expensive movies - Hotel Transylvania for them and Silver Linings Playbook for us, the prospect of which had been my chief reason for excitement at the entire plan (lame, loserish, whatever, I'm comfortable). I really liked the movie. I liked the story, I liked the characters, I liked Bradley Whatshisface who I don't usually care for, I liked Jennifer Lawrence who was fine in The Hunger Games but didn't really show off a lot of acting chops in my opinion (I actually preferred her in Saturday Night Live), and I loved Robert DeNiro.

Then we laid down in possibly the most comfortable beds I have ever slept in.

It was a deeply satisfying and indulgent family day. Which was nice, because at some point during that night, the influenza virus stole into my lungs and burned my life down, and at the moment I don't ever feel like I'm going to get it back.
family stuff happy days

Sasha said…
That sounds AWESOME. Staying in a hotel downtown is BRILLIANT. I keep saying I'm going to do that, and then cheap-out. But hell, if it actually got us down to Winterlude (which we didn't get to this year), it would totally be worth it.

This looks like such a fun weekend. I sure hope you are feeling better though. That family picture is excellent, you all look great! xo
February 26, 2013 at 6:13 PM

StephLove said…
So what is a beaver tail? Some kind of potato pancake?

I'm glad you had fun. I'm sorry you're still sick. You will have another good day some day. I'm pretty sure of it.

Finola said…
That sounds like the best weekend ever. My kids only got to Winterlude this year because I made my husband take them on Family Day when I had to work. We can be super lame too.

Marilyn (A Lot of Loves) said…
There used to be a Beavertails right by the place where I worked. I have had a few. They are rather tasty.

Lynn said…
@StephLove - a Beavertail is a kind of flat donut - a deep fried pastry kind of thing. You can eat it plain, but most people get one with a "topping" - i.e. cinnamon sugar sprinkled on top, or sugar and lemon juice. YUMMY.

@Allison - I'm so sorry the story had a sad ending! Everything else looked AMAZING. What a fantastic idea, to do a little getaway in your own city. Last week I was chatting with the ladies at school pickup and we were all saying we almost never make it to Winterlude, and felt like bad Ottawans.

We went to the NAC a couple of weekends ago, on a Saturday afternoon, and the crowds (from Winterlude) were NUTS. Cars and people everywhere. It basically cemented our decision to never go downtown again. Unless we have a hotel and Bradley Cooper to keep us motivated :).
February 28, 2013 at 5:00 AM