February 13, 2013
I know blogging about your kid's birthday party is a little lame, but I'm uninspired and dispirited and, in truth, I was pleasantly surprised at how well our old-fashioned crafts-and-games no-laser-tag-or-swimming-or-skating-or-movies-or-clowns-or-what-have-you party went off (not that I am AT ALL opposed to the gimmicky parties - we had just run out of appealing gimmicks). For starters, Eve made up her list of invitees and it only had eight kids on it, rather than the normal sixteen-to-twenty. I asked her what the deal was (was she fighting with some girls? Had they done something?) and she said "well, I'm older now, and I don't need...well, I still want a PARTY, but I don't need to have everyone I know at it". After I stopped gaping cluelessly, I agreed vehemently that this was indeed the case. Later on, my mother said that Eve told HER that she had figured out that when there were tons of people at a party, they were all loud and crazy and it really prevented the focus from being on her. Either way, I figured it was a win.

Eve said she wanted to have a moustache party. Because, you know, she (along with every other tween in the western world) loves the moustaches. And she had enough of a moustache haul from Christmas that we figured we could put together a pretty good party. 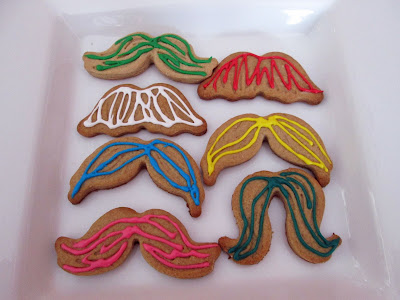 and a moustache cake: 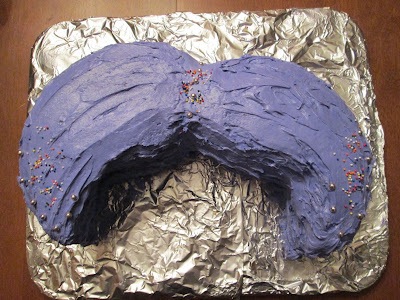 at the last minute, we remembered to do some stuff with balloons: 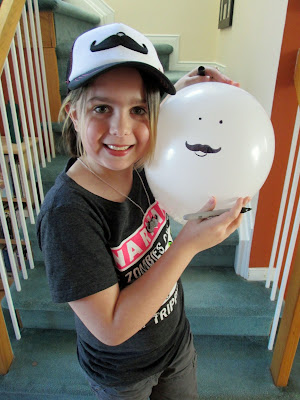 Ahem: some of the balloon stuff we did was more appropriate than some of the other stuff. 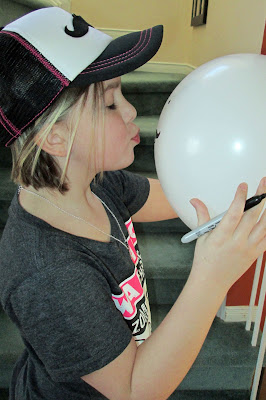 We gave everyone fake moustaches to wear: 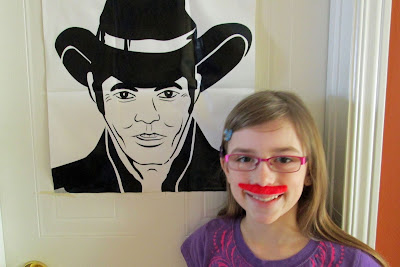 Some were already wearing them. 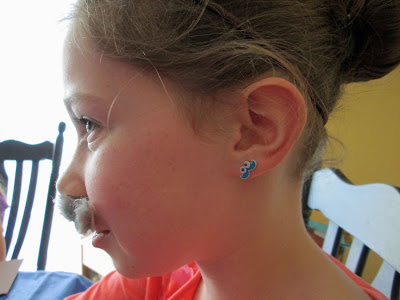 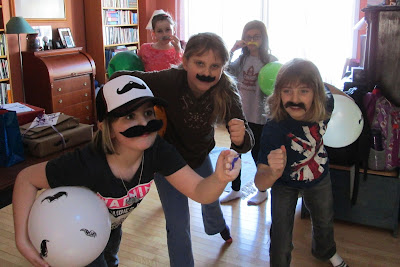 When I was at the dollar store for picture frames, I saw these animal masks and grabbed them on an impulse, even though I knew they were for younger kids. Turns out, when you say they can put moustaches on them, animal masks are really cool. 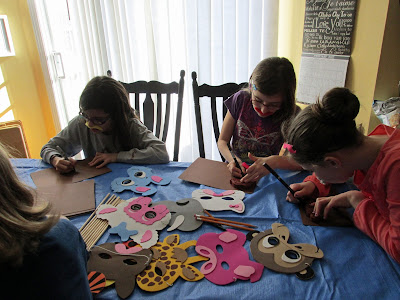 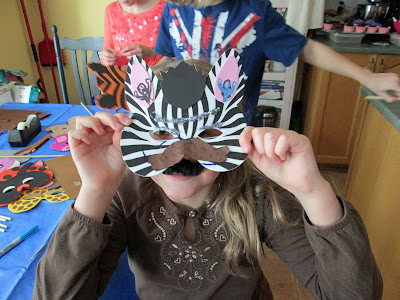 Then we made moustaches on sticks: 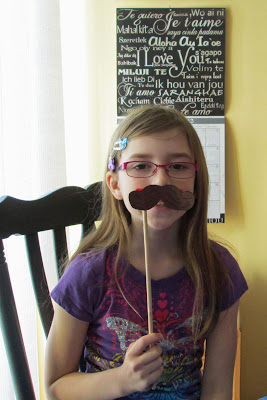 A few weeks ago, I stumbled on this fabulous website, which made us able to turn this picture: 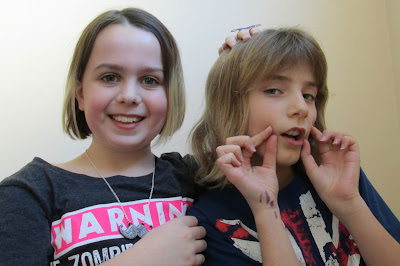 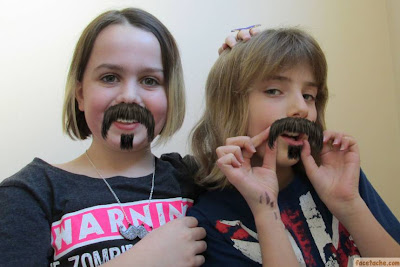 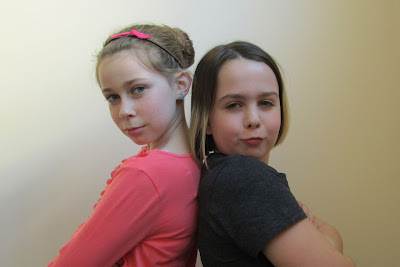 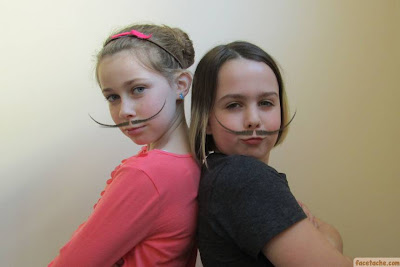 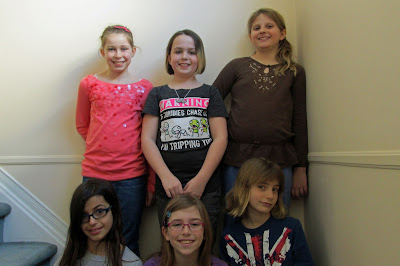 well, you get the idea. 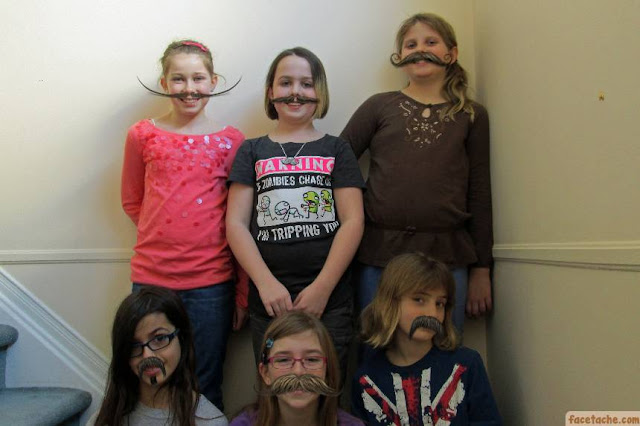 Then we played "pin the moustache on the cowboy" which I kept assuring all the mother sounded porny but wasn't, but truthfully....(it was particularly disturbing when Eve said he was her boyfriend and started calling him Roger)

Then we played this hilarious game I keep forgetting to thank Susan for telling me about, where you put a small prize under a metal bowl, place it in a room, and have a blindfolded kid take a wooden spoon and tap all over the place looking for it, while everyone else screams out 'hot' and 'cold' and laughs themselves silly. 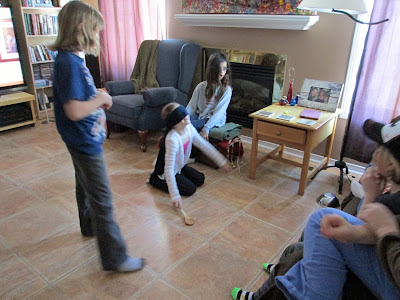 Then we had cake. 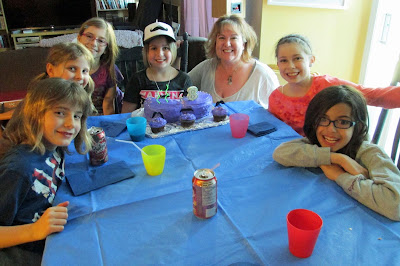 In between everything, when I was cleaning up or preparing for the next activity, they would have sudden intermittent dance parties to Eve's party playlist: 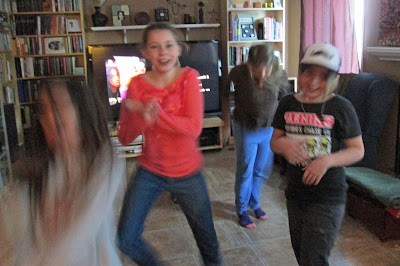 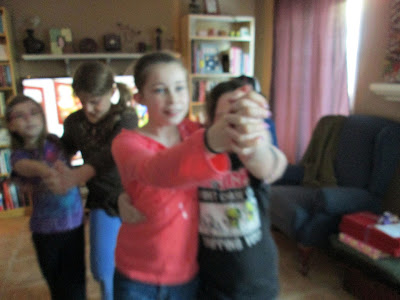 The kids - even the ones I was afraid would be too cool for it all - got right into it and were great. The parents were highly complimentary. Eve said it was the best party ever and I was the best mom for doing it all. She said no one else would ever get to have a party that great. I (going for the self-deprecating note) said probably some kids would. She said "well maybe Angus, because he has THE SAME MOM". It was the first time we'd had her party here in three years. And afterwards? I was so tired I felt like I'd gone six rounds with Tyson and run a marathon. But my kid was happy, and hardly any moustaches were harmed.
Eve of destruction Fabulous people happy days

Maggie said…
Ooo I'm stealing the metal bowl idea for oldest's party next weekend. He is turning 10 and having his first sleepover party. At first I was hesitant, but when he agreed it would be limited to only three kids (instead of the ridiculous 15 at his last-year's party) I was all in. This will be our first at-home party for him since he turned 6 because he always wants tons of friends and I refuse to have 15 boys at my house. I'm looking forward the (hopefully) years of majorly scaled down birthday parties! Damn, I've probably just jinxed myself . . .
February 14, 2013 at 4:07 PM

StephLove said…
What a fun party theme. J's birthday is next month and she's still picking a theme. Fairies are a front-runner, but she's also considering "the forrest" and "things that are fast," plus a few more I can't remember.
February 16, 2013 at 6:18 AM

Sasha said…
OMG this ROCKS!!! So much I want to comment on but I'm going to go with the nonsequiturs: LOVE Eve's t-shirt, and that pot game? We used to play it at the kids' Christmas party for my Dad's work, which my mom organized, so I think that means the game is of German origin? At any rate, we played it with our 3-foot-long 'spanking spoon', so if you really want to freak the moms out, I can see if I can get my hands on it for you for next year.
February 19, 2013 at 5:58 AM