February 08, 2013
This is what my newly-minted two-hands old daughter says to me every time she jumps out of the van at school, leaves the house to play next door, or just goes upstairs without me. She hugs me, or kisses me on the cheek if I'm baking or cooking or working at the computer and she doesn't want to disturb me. Then she calls out "Love you, mama" as she skips away. Every time.

"Love you too, babe/sweetie" is usually what I say. Once when she said "Love you, Daddy" as she was going upstairs, he didn't respond quickly enough because he was reading the paper, and when she pressed him he called out distractedly, "See ya", and after soundly mocking and scolding him she now demands the same response from him every time. But I just say "Love you too", or, occasionally, "Love you more", if I have the time and energy for a protracted "nuh-uh, I love YOU more" battle, which we have now enshrined in this bracelet (which I gave to her): 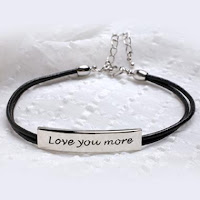 and this mug (which she made for me):

(Isn't it cute how we've given material form to our competitive affection? Now sometimes we just yell "It's on the bracelet, chump!" or "It's on the mug, loser!" at each other in a heartwarming shorthand.)

Anyway. It adds up to several I love you mamas a day, sometimes a dozen or more. And sometimes I muse about whether we say it too much. I think about people I've heard saying it makes them nauseous how some families can't stop drivelling on about how much they love each other. I wonder if there's a chance that we're chafing the words smooth, wearing off their meaning.

Then I think of the years that are coming. She's two hands now. Double digits. Tough days could be coming. Days when she doesn't see things the way I do, when she rails at me and flails against me in the course of forging her own path. Unkind words could fly between us.

When I think ahead to these days, I imagine that the all the I love yous we trade now are being laid against our bodies as a kind of armour. When the railing and flailing and unkind words start flying, maybe we'll both have that shield, forged from so many loving words, as protection against lasting damage.

It's worth a shot, anyway.

Alicia said…
I'm a little teary eyed after this one! You truly rock at motherhood. I love that you have a little game with it and I've wondered the same about saying it maybe too much. Love yous were not common in my house growing up so I sometimes think we overdo it with E. I love that she calls you Mama still. I hope E calls me this forever. Happy Birthday to your baby :)
February 8, 2013 at 7:05 PM

StephLove said…
Happy Birthday to Eve. Very sweet post, but why is she eating a butterfly?

My almost-12 still calls me Mommy about half the time but instead of morphing into Mom, which I would have considering the natural order of things, when he doesn't say Mommy he calls me by my first name, which I Do Not Like, but it doesn't seem fair to object because he's always called his other mother by her first name.
February 9, 2013 at 5:14 AM

Bunnyslippers said…
Just enjoy it! You're happy, she's happy, just be happy. If other people roll their eyes at happy, to heck with them. It's not a display for anyone else's benefit. Lovey is good. :)
February 9, 2013 at 7:51 AM

Hannah said…
Michael and I didn't hear the actual words "I love you" very much as kids, so we make a point of at the very least saying it to the boys every night at bedtime.

But a charm bracelet! A mug! You guys win at being adorable.

Lynn said…
Oh, so so sweet! Loved this post. I think it's super important to tell the kids I love them, all the time. My own mom hardly ever said it, and then she went through a phase about 10 years back when she'd sign off every phone call with a "love you!" which was weird but SO nice, but now she's dropped it again and it makes me sad. So I throw it out there at least a dozen times a day, each.

Gal Smiley has the same jammies as Eve! She would LIVE in those things if I would let her. She often comes home from school and puts them on right away. I predict someday she'll be leading the fashion movement to bring back jumpsuits for everyday wear.
February 11, 2013 at 5:31 AM

Maggie said…
I was just talking with a friend the other day and she said her dad never said I love you to any of his kids. While they all understand that he does love them, she says it all the time to her kids because having not heard it growing up, she knows how important it is to say. I'd rather say it too much than not enough. Life gets away from me much too fast to leave things like that unsaid.
February 11, 2013 at 11:12 AM

Anonymous said…
When I originally commentеd I clicked the "Notify me when new comments are added" checkbox and now each
timе a сomment is addеd I get four emаilѕ with thе same comment.

Is there аny way you can гemove
people frοm that servіce? Cheerѕ!
My web site > massage therapy in Birmingham
February 12, 2013 at 6:24 AM

Mary Lynn said…
I had a friend in university who told me that she never once remembered her parents telling her they loved her or were proud of her. She'd grown up in a well-off family, was educated, well-fed, well clothed, but she had a lot of sadness in her and a very difficult relationship with her parents. Myself, I had trouble conceiving of such a thing. My parents regularly told me they loved me and I told them the same right back, because I did, very much.

The words, "I love you" are said plenty of times in this household, but if we had bracelets and mugs as great as the ones in your post, you can bet we'd also be yelling "It's on the bracelet, chump!" or "It's on the mug, loser!" at each other, 'cause that's just awesome.
February 16, 2013 at 11:38 AM