Pam and I went for a walk this morning on a trail we like. We were going to go to the gym but we figured we were running out of days where we could walk outside in the November sunshine. It's hard to maintain your surliness in the face of this: 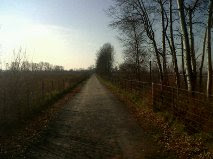 Of course, the picture doesn't show the fact that the unusual warmth of the day really ramped up the essence of cow shit, but that isn't surly-making so much as slightly gag-inducing. Still, it was a good walk.

Then we went to the grocery store. The grocery store had Rold Gold Peppermint Dipped Snowflake Pretzels. Take that, surliness. Even the residual snark left over from when that woman had to pull into the parking spot right next to us so badly that she almost ran over Pam melted away, mostly.

Then we went to Shoppers Drug Mart because Angus wasn't happy with the blackhead scrub I bought him, and insisted that he needed daily pore cleanser, because yes, I'm at that stage now, and it's a BARREL of LAUGHS, let me tell you. We ran into the woman that I volunteered with at the book fair - the one who almost got the vapours every time she had to tell me I was doing something wrong? She saw us and said "Oh hi! Pam and.... Wendy?", then became so distraught when I had to correct her that I almost said 'no, sorry, I forgot! It's totally Wendy!' She's very nice, but the field of chaos I emit constantly might just be too much for her.

Then I went into the library to shelve books and Eve came in after school and shelved the picture books and read us Green Eggs and Ham and Stand Tall, Molly Lou Melon and it was nice.

Then we came home and my goulash didn't suck. Angus said "what is this?" and I said "it's kind of like Hungarian curry", so he ate it, and pronounced it good.

Then I checked my email and told Matt that another couple wanted a ride to Yuk Yuk's on Saturday. He said sure, just tell them no funny stuff in the back seat. And Eve said "Oh GOD! DAD! I KNOW stuff now! Before I would have just thought you meant making faces and poking each other!"

Then Eve told us about her teacher talking to them about animals and having to say 'le phoque' which is seal, and then saying "yes, fine, everybody go ahead, get it out, phoque phoque phoque, ha ha ha." Which led to Matt telling us a story about going to an international sales meeting where his German friend had learned the word clusterfuck and was using it with gay abandon, not really realizing exactly what it meant, and then a very serious South American conference moderator stood up and said that this was the first conference they had put on and they had spent a lot of time and money preparing, so he wanted to make sure everyone there was prepared to focus - focus hard, focus well, focus focus focus.

Except his accent made the long 'o' sound more like a short 'u'.

Then he told Eve that that little story had to stay in the kitchen. So she ran off to play the piano, but then pranced back in and said "BUT, since I'm still in the kitchen...." and has been playing her song and then running into the kitchen humming and then very quietly saying 'fuck us' periodically, then running away cackling like a mad fool ever since.

What's a surly girl to do?

Nicole said…
I do not even know where to start. Fuck-us. Fuck-us hard. Or the guy happily saying clusterfuck over and over. This post made me laugh and laugh. And the pore cleanser...I swear if I'm still using acne medication by the time the kids need it...well...I guess I'll just buy fucking (phuque-ing) stock in Proactiv.
November 22, 2012 at 4:56 PM

Wrath Of Mom said…
Seriously? Wendy? That's not even close. And I think you should relish correcting her. It helps even things out a little from the book fair.

Amber Strocel said…
I used to have a co-worker named Semen. The first 'e' was short, and the emphasis was on the second syllable, but it still made it kind of difficult to take him seriously in meetings.
November 22, 2012 at 7:47 PM

Sasha said…
*snort*. How are things in the kitchen now? Meena (4) told her 2-year-old-sister to "C'mere, you little fucker" the other day. Kinda funny, now that I think about it.

Ok, so totally not funny.

Glad to hear the surlies are abating. Get me past tomorrow's birthday party, preferably with a cake that has yet to be made, or ordered, or just generally figured out, and I'll maybe relax too. That, and my big radio debut, of course.
November 23, 2012 at 10:51 AM

And it's after American T-giving so I am released from surliness about premature Christmas food/decorations/music etc. I have no idea how I'd know when to stop being cranky if I were Canadian.
November 23, 2012 at 11:19 AM

I know a woman, sort of, through school and her name is Lisa and I call her Cindy. In my head. Although one time last year, someone was kind enough to introduce me to her and I was all "oh, we've met, it's CINDY, RIGHT?" and she was all, "No you should have waited for the introduction, it's Lisa." Good lord. Of course every time I see her now (every day, at school) I have to go "Cindy no Lisa. Lisa. Lisa." which I'm sure gives my face a lovely constipatory look.

Someone tweeted about those snowflake pretzels and I bought some and they are surprisingly tasty.
November 24, 2012 at 4:54 PM