November 01, 2012
I don't feel like doing NaBloPoMo. But then I don't feel like doing much at the moment besides lying on the couch and bemoaning my stupid brain chemistry. "You live your life at the edges of the bell curve" my kindly pharmacist sister just informed me. "Sometimes that's a good thing, and sometimes it sucks donkey balls." Okay, she didn't really use those exact words. She's less vulgar than I am. Mostly. Back when we lived together while she was in pharmacy undergrad and I was doing my master's, she used to say 'suck my ass' a lot, but then she determined that this was too vulgar, so she switched to 'smooch my patootie'. I, on the other hand, have only gotten more vulgar with age. I used the expression 'shot my wad' the other day and my husband actually recoiled.

Anyway. I'm housebound for a few days as I try to ride out some adverse side effects while determining if said side effects are going to subside and let the drug do its magnificent thing, or if this is going to be one more in a long line of Miracle Cures That Weren't. I might as well be writing. Or... wait, have I watched all the available episodes of Leverage?

Let's start off with some late Halloween pics, of which I don't have many because I've spent the past few days feeling unpleasantly drunk and whining (try to keep up will ya?) This was the first year Matt let Eve use the knife and do a bit of pumpkin carving on her own, in addition to generating the artistic vision. She kept saying "It's pretty good for my first pumpkin, isn't it?" which was cute the first six times and then should have become annoying but instead started to become so heartbreakingly beautiful that my ear drums leaked out of my eyes because my baby! wielding a knife! all by herself! and also fake drunkness! 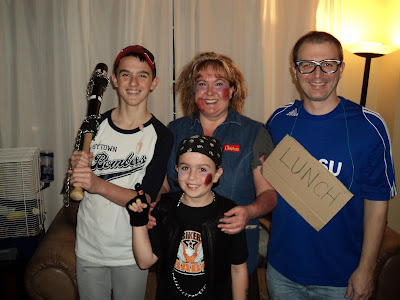 So here we are at our friends' Halloween party: Baseball player/Zombie slayer (Angus), baseball biker (Eve) baseball bookstore employee (me) and Zombie food (Matt - he works in fibre optics and actually had a shirt from a recent sales meeting that said fibre and the number 1 on the back). I said "we look sort of lame" I said when I saw this picture, and Matt said "yeah, but we look happy", and he's not wrong. 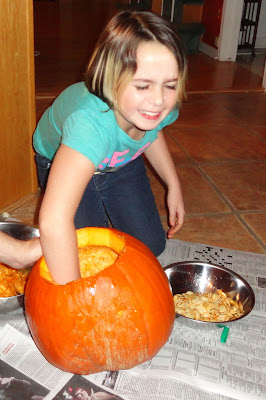 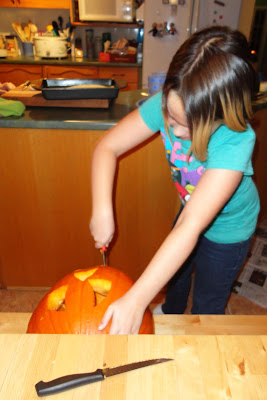 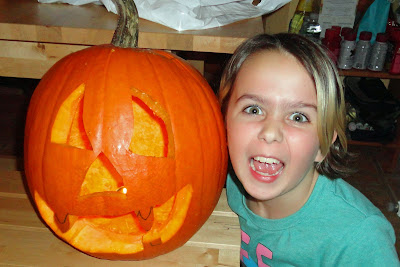 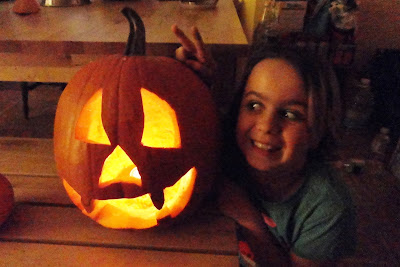 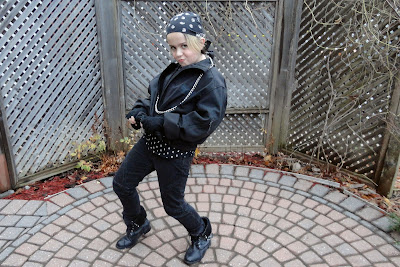 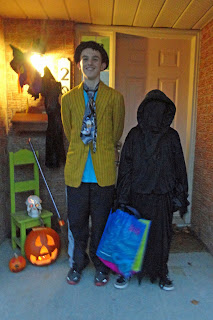 Bizarre.... game-show host or something pulled out of the tickle trunk for trick-or-treating when Angus decided at the last minute to go trick-or-treating with his friend of the same age who is so embarrassed at the height difference that he had to cover his face.

Hannah said…
Holy moley, your daughter is the spitting image of you!

You guys do look happy. So cute.

Wrath Of Mom said…
I'm not going to do Nablobloahblaglunaoprahmo. But I will promise to comment on every single one of your posts. YOU ARE WELCOME!!!!
November 1, 2012 at 5:39 PM

StephLove said…
It's pretty good for her first pumpkin.

N carved his own for the first time this year, too.

I never do NaBloPoMo because as you have noted, once I start a blog post it never ends, but I am looking forward to having more to read on other people's blogs, including yours. I hope November looks up for you.
November 2, 2012 at 6:00 AM

Ms. G said…
Eve looks like a doll! I had a Zombie Catcher/Slayer at my house too! Apparently the official weapon IS a baseball bat. I didn't realize that. In other coincidences,playing fun with Meds myself and though I'm not supposed to hint at it, but screw it, I like that T shirt. I could have worn one that said
The Terminator : )

Nicole said…
Her pumpkin is excellent! I always feel like I should do NaBloPoMo but I never do because I cannot commit. I'm a blogging commitment phobe.
November 2, 2012 at 9:56 AM

Amber Strocel said…
That is great for a first pumpkin!

Marilyn (A Lot of Loves) said…
I like the lunch costume. K was a zombie this year so it would have been appropriate for me as his sidekick. Or I could put him on a chain and carried around a samurai sword and been Michonne. Dang, maybe next year. I have a feeling there will be a number of zombie costumes in our future.
November 3, 2012 at 5:58 PM

Kim said…
This is not a great comment but, I have carved a few pumpkins in my time and hers is better than all the ones I have done.

I also got an N in scissors in elementary school so, you know, I never really aim high at hand-eye coordination things. Still. That is a Damn Fine Pumpkin.
November 6, 2012 at 4:11 PM