Mondays on the Margins: Inside by Alix Ohlin 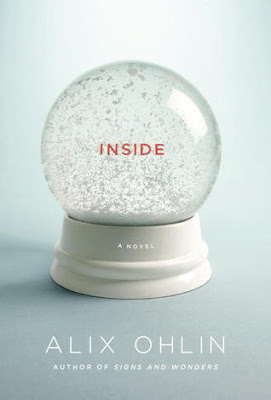 From the publisher:
When Grace, an exceedingly competent and devoted therapist in Montreal, stumbles across a man who has just failed to hang himself, her instinct to help kicks in immediately. Before long, however, she realizes that her feelings for this charismatic, extremely guarded stranger are far from straightforward. In the meantime, her troubled teenage patient, Annie, runs away from home and soon will reinvent herself in New York as an aspiring and ruthless actress, as unencumbered as humanly possible by any personal attachments. And Mitch, Grace’s ex-husband, who is a therapist as well, leaves the woman he’s desperately in love with to attend to a struggling native community in the bleak Arctic. We follow these four compelling, complex characters from Montreal and New York to Hollywood and Rwanda, each of them with a consciousness that is utterly distinct and urgently convincing. With razor-sharp emotional intelligence, Inside poignantly explores the many dangers as well as the imperative of making ourselves available to—and responsible for—those dearest to us.

The lovely Trish at Anansi sent me this book. I was very happy, since I had been eyeing the pretty snow-globe cover and wishing someone would send it to me. Then I started reading it and I was conflicted, since for the first few chapters, all I felt was a fervent gratitude that I was not any of these people. So I put it down for a few days. Then I picked it up again, preparing for a slog, and found myself unable to put it down.

On the back cover, someone named Jay Parini is quoted as saying that Ohlin writes like an Old Master. I have to disagree. There are mistakes, even rookie mistakes. I never got over my annoyance with the fact that Grace, the therapist, seems to be chasing after Tug, the suicidal mystery man, like a classic prideless woman or a high school girl who thinks that a tortured moody character is more desirable than a man who can hold down a job and participate in a conversation. While there are ways that this could have been written that made it not so cliché, in this case I felt like a lot of it was just that. Grace thinks "she understood that this elusiveness had been part of his appeal: he withheld himself, and kept her wanting more." I wanted more too, from her and for her.

The other characters, though, were more satisfyingly complex, even if no more comprehensible to me. Grace's ex-husband Mitch's experience in Iqaluit and the parallel story of Tug's time in Rwanda are powerful and harrowing descriptions of what it's like to be a privileged person witnessing -- and trying with a certain futility to effect change in -- horrifying, life-changing, soul-destroying events. There are no heroes and no last-minute escapes, just people caught in the grinding machinery of history, and people left to return to their regularly scheduled lives, with varying degrees of success. Here, Ohlin deftly avoids sentimentality and melodrama, which makes the whole Grace thing doubly incomprehensible to me. The character of Anne, Grace's teenaged patient who then moves to New York to become the "aspiring and ruthless actress" is probably the most impenetrable, and yet she is convincing, as someone who had no positive adult role models and then enters a business where artifice and manipulation are king.

I also loved that Martine, Mitch's lover and the mother of an autistic boy, isn't painted as any kind of saint - in fact, she's a bit of a bitch. There isn't anyone in this book that you would call a 'protagonist'. There isn't any kind of linear story and people do stupid frustrating things and wander in and out of each other's lives. I didn't fall in love with this book; I had kind of a sustained argument with it. Which means that it made me think. Which I'm thinking is probably a good thing.

-"Not one soul knew what she'd done, and the air of corrupt superiority this secret engendered in her changed her more than either the accidental pregnancy or its termination had."

-"This was the worst part, his poems seemed to say: you believed your cynicism would save you from hurt, only to discover a secret, uncherished vulnerability in your soul."

-"But the fact that she couldn't explain it to herself was maybe as good a reason to do something as she'd ever had. Sometimes you needed to surprise yourself with randomness, to prove you have depths that even you can't understand."

-"The woman looked at him with an undisguised scorn that had a kind of desire glimmering around the edges of it. What she wanted, he thought, was for a better candidate to come along, but she'd take what she could get."

-"Mitch had always been the nice guy who wryly accepted that nice guys finish last, and now he discovered that he wasn't all that nice, and that he was finishing last anyway, with only himself to blame."

-"But longing was part of life here, and it made him happy to feel his lack of these things, as sharp as hunger. He was addicted to want. He didn't know how this had happened, whether it was because of his childhood or some quirk of his personality or genes, but somehow he had become a person who needed to do without in order to appreciate what he had."

Anonymous said…
Hеllo tо all, it's in fact a nice for me to pay a quick visit this site, it contains useful Information.http://soundcloud.com/joycejcarter2345/watch-misfits-season-4-episode
Here is my blog Misfits Season 4 Episode 4
November 20, 2012 at 2:01 AM

Nicole said…
This is actually on my Xmas list! I think I got it, actually, because after I gave my husband my list a suspicious confirmation email from amazon showed up in our inbox...
November 20, 2012 at 4:29 PM