Mondays on the Margins: blog tour for The Deception of Livvy Higgs 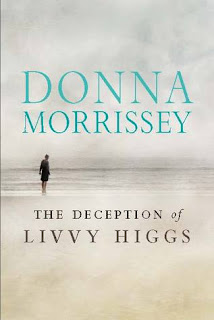 "For two traumatic days, Livvy Higgs is besieged by a series of small heart attacks while the ghost of her younger self leads her back through a past devastated by lies and secrets.The story opens in Halifax in 2009, travels back to the French Shore of Newfoundland during the mid-thirties and the heyday of the Maritime shipping industry, makes its way to wartorn Halifax during the battle of the Atlantic in World War II, then leaps ahead to the bedside of the elder Livvy.Caught between a troubled past, and her present and worsening living conditions, Livvy is forced to pick apart the lies and secrets told by her greedy, prideful father, Durwin Higgs, who judges her a failure, and her formidable Grandmother Creed, who has mysteriously aligned herself with Livvy's father, despite their mutual hatred.Tending to Livvy during her illness is her young next-door neighbour, Gen, a single mother and social-work student. Overnight, a violent scene embroils the two in each other's lives in a manner that will entwine them forever. In The Deception of Livvy Higgs, the inimitable Morrissey has written a powerful tale, the Stone Angel of the East Coast."

I've read Donna Morrissey's Sylvanus Now, and I've had What They Wanted on my shelf for months. Once I started reading this book, I couldn't put it down; I was particularly impressed with Morrissey's rendering of setting in the first book I read, and that holds with this one, which takes place both in Halifax in 2009 and on the French Shore of Newfoundland during the mid-thirties. If I close my eyes now and think of the book I can take myself there, standing on a rock with salt spray misting my face, hearing the exuberant mix of French and English voices.

The characters are equally solid and memorable. Livvy, kind but instinctively mistrustful. Livvy's mother, thwarted, unhappy and angry at the lost promise of her marriage. Livvy's father, nursing a years-old rage at the perceived wrongful death of his own father. The immense, boisterous, loving Louis family who takes Livvy in as one of their own. Livvy's Grandmother Creed, who seems eager to make up for her mistakes with Livvy's mother. There is fierce fighting between family members and between nationalities, based in grief and fear and feelings of injustice.

I swear to God, before I read that part about this being The Stone Angel of the East Coast, I wrote "Livvy Higgs as an eightyish old woman reminded me very faintly of Hagar Shipley in The Stone Angel by Margaret Laurence - cantankerous, intractable, indomitable." I like the way Morrissey's family secrets are not melodramatic ones involving murder or other convoluted plot devices, but instead are all traceable back to good old-fashioned human frailties -- envy, greed, insecurity -- which have incredibly far-reaching and destructive consequences. Even the present-day "violent scene" involving Livvy and her neighbour is more pedestrian than the jacket copy  makes it seem - and I mean 'pedestrian' in a good way.

I love Morrissey's writing because it isn't about bells and whistles. It's about translating her love for a place and a people into stories like this.

-"I close my ears. I'm too tired for company and too old for ghosts. If there's one good thing age has taken from me, it's the burden of memories. In the past eighty years they've burned themselves out, leaving little more than a spattering of images that dim and glow like embers in the receding path of the fire they once were."

-"I chase after Mother down the yellow sand beach of Sables d'Or....She walks till she's tired. Then she stands tippytoe atop a rock and holds out her arms like wings, her hair trailing a burnished windstream behind her, her eyes filled with sky."

-"Father walks out the door towards his shed as Mother starts pushing things around on the sink, neither of them moving too quickly as though they, too, felt the stillness in that broken moment, felt the fear of time stopping and having to restart, throwing things off with its tremor and nothing ever matching onto itself again."

-"But mostly I think of Henri, and continue walking home, stroking the petals of his smile."

-"'Picking a flag's no joke, Livvy. The minute you settle on one, you spend the rest of your life serving it, else you're a traitor or a coward. Which fecks me good because I'm everyone's feckin' brother, uncle or cousin. Gawd-damn,' he ends in wonder."

*Disclosure: I received a review copy of the book from Penguin Canada. Opinions are my own.

collette Antaya said…
I love the "stroking the petals of his smile" line.
and I really enjoyed Sylvanus Now so I will definitely read this one too. Thanks for the recommendation.
September 25, 2012 at 10:42 AM