August 09, 2012
I always know intellectually that intense experiences are followed by inevitable let-down, and yet I'm always unprepared for the reality. I loved being in New York and I was also happy that it was at the end of our crazy busy travelling/houseguests/nonstop plans stretch and once I got home the rest of August was a wide-open expanse of Summer Fun.

So naturally I've been a mopey whiny mess all week. Every morning I would spread out my suitcase and the laundry baskets on the bed and fold a few things and lay out a few things, and then leave it all there until Matt wanted to go to bed, whereupon he would pile it all on the floor at the foot of the bed again, and the next morning I would start all over again. I bought groceries I've mostly been too tired and headachey to cook.

I've given up on trying to pull back on my antidepressant until September. The days I don't take it are so unutterably wretched I can hardly stand it, and it's not fair to the kids. I'll wait until they're back in school and then throw myself on my doctor's mercy.

Yesterday after I dropped Eve off at her friend's house, Angus spontaneously decided that he and I should make pancakes. I was delighted. I found the recipe and gave him the ingredients and measuring utensils and let him go to it. 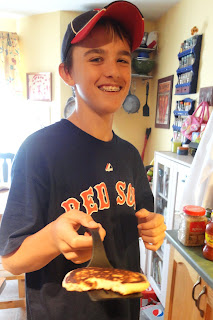 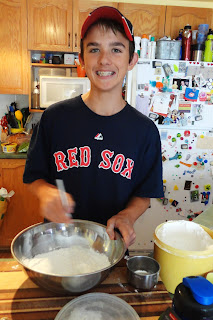 I never make the pancakes. Mixing the batter was fine, but the actual cooking of the pancakes went horribly wrong. We waited to long to flip them, then we flipped them too tentatively, so they were burned on one side, then batter splattered out from the underside so they were all lumpy and malformed. We accidentally made one that looked like Mickey Mouse, and a few misshapen blobs, then he wanted to make a giant one so we poured the rest of the batter in the middle of the pan, but then when he flipped it half of it fell on the edge of the pan. We laughed our asses off and drowned the weird-ass pancakes in syrup and ate them. We texted Matt that we would not be usurping his pancake-making duties, and he expressed his relief. Angus was enamoured of the word 'spatula' and said it over and over again until I threatened him with bodily harm. 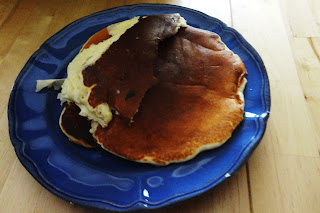 Speaking of meals that WOULDN'T make Gordon Ramsay curse a blue streak, lunch at Maze with Marilyn was amazing. I usually assume that acclaimed restaurants are overly hyped, because... I don't really know why, actually. Because no matter how you whip, chop and julienne, it's all just food. It's not like they're serving unicorn burps or anything. But then I remember that when you eat a really great meal in a restaurant, it's like everything you eat is the perfect example of itself. The salad I had was the perfect salad, and I felt like every salad I ate for the rest of my life should have butter lettuce and grilled corn and roasted peppers, and I had no idea what was in the dressing but it was PERFECT. The chicken was perfectly cooked and convinced me that chicken should never be without fried yucca and fig reduction. The only thing I didn't adore was the stout ice cream. I thought, like I usually think about wacky ice cream flavours, 'well that can't possibly taste like what I imagine it will taste like', but it did. Turns out I don't like Guinness in a glass or in a scoop. However, they brought us one of each dessert instead of the same one, as we had both ordered, so they gave us the other one anyway, and we discovered that the creme fraiche from the other dessert went really well with our chocolate pudding, so it all turned out fine. Also, it was Restaurant Week in New York so our meal was actually quite reasonably priced. We celebrated this by having hideously expensive cocktails. 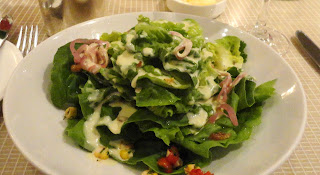 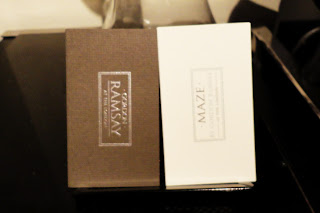 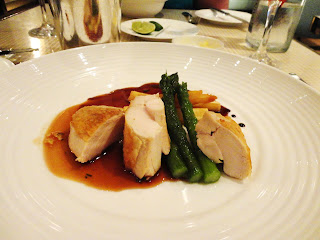 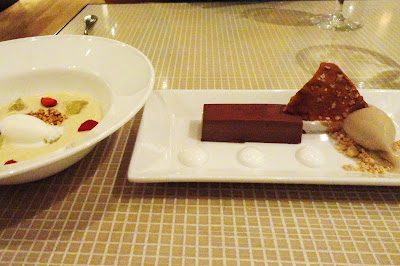 Julie said…
Glad to hear you are back on the wacky pills. I was getting worried about the gloom that you seemed to be stuck in. :) are you going to talk more about blogher? I'm dying of curiosity. It seems like it was a "what goes on at blogher stays at blogher" sort of trip! ;)
August 10, 2012 at 4:26 AM

Nicole said…
I know I've said this before, but I so wish I was there with you! Not that I would want the chicken...or the ice cream...but I've never been to an acclaimed or hyped restaurant. And I want to. I would have had tons of expensive cocktails with you.
August 10, 2012 at 9:25 AM

Maggie said…
You put it perfectly about the great restaurant thing. We went to two places on our honeymoon (back when Jesus was a boy) that were renowned and afterwards I wished I was incredibly wealthy so I could eat like that every day. Regular ingredients turned into amazing food - it's like magic. Food cooked by myself is . . . not as good. Sigh.
August 13, 2012 at 10:56 AM

Sasha said…
There's a theory that summer is a better time to go off antidepressants than during/shortly before winter. But I think it's DEAD WRONG, I was more ready to drop them last October than I am now!