Feeling blah today. The temperature outside is incompatible with sustaining life, but I didn't have to go anywhere, so I can't blame it all on that. Small irritations: I screwed around on the computer for too long before drying my hair so it came out frizzy and weird, which it probably would have anyway because, hello, eighty-five percent humidity?: my knee hurts, because I'm old and creaky: I spent upwards of three hours staring at my latest assignment in complete and utter incomprehension, feeling like a dumbass loser, before realizing that I was trying to apply the first set of instructions incorrectly and applying them correctly made everything really really easy, which should have made me happy, but instead I just felt even STUPIDER.

You know what? I AM going to blame it all on the weather. Forty degrees with the humidex. Jesus, how is that even real life?

Small funny things: Angus's teacher emailed me to say that they had been discussing plans for the last week of school and talk of a potluck came up (prompting flashbacks for both her and me of the meatball incident) - she wanted to know if Angus told me that he had volunteered to bring in flaming shish-kebabs. Okay, that's only one thing, and I can't think of any more because I'm stupid because of the pills that I'm almost not taking any more and did I mention the weather?

On Sunday, my friend Janet and I took our daughters to HeronCrest Stables in  Smith's Falls (about 45 minutes from Ottawa). I had seen a Dealfind voucher for half-price riding lessons and I knew that Janet's daughter loves horses. As for Eve, since she was one and a half, every time we're at a fun fair or anything that has pony rides, she's grabbed the nearest parent's arm and not let up until her tiny butt was on one of those ponies. 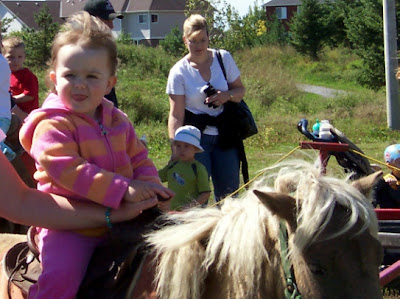 Does she look smug or what? 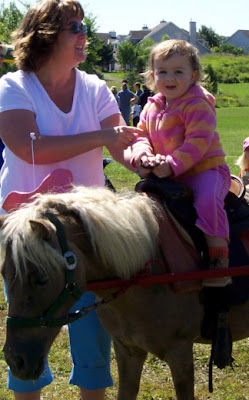 So we snapped up two of the Dealfind vouchers and then I suddenly thought - shit, she hasn't been on a horse in six years and she's afraid of a bunch of stuff now. She won't even ride a bike and somehow I was blithely confident that she would be okay riding a horse?

Happily, she seemed pretty excited at the prospect, so we booked the lesson for Sunday.

Diana, the owner/manager/coach, was amazing. I think she sensed that Eve was a little nervous and Caitlin was a little hyper, and she was calm and matter-of-fact with both of them, which made Eve braver and Caitlin quieter. She had them groom the horses beforehand, and taught them the proper names and purposes of all the equipment. Anything that they could safely do on their own, she had them do, without hovering or micro-managing. 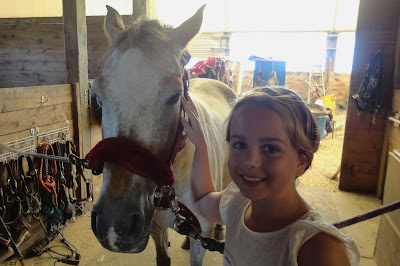 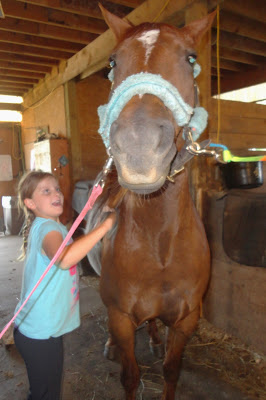 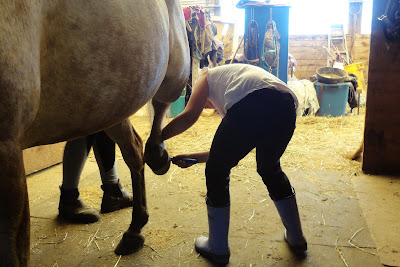 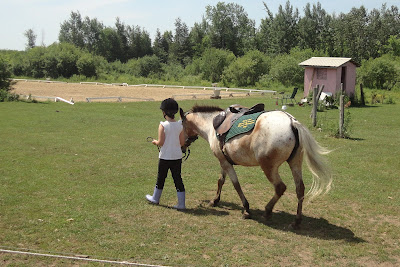 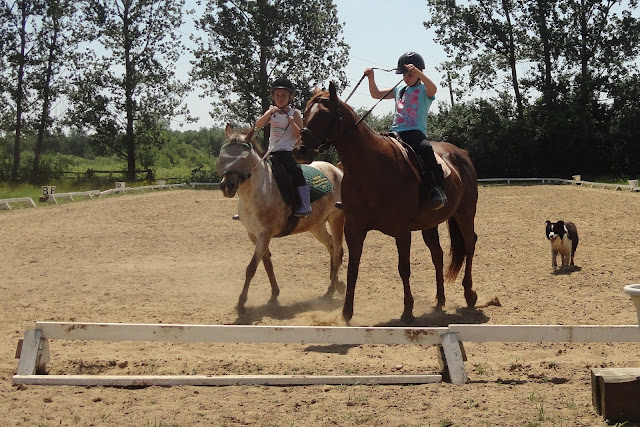 No hands! (Eve was not initially impressed with this at all). 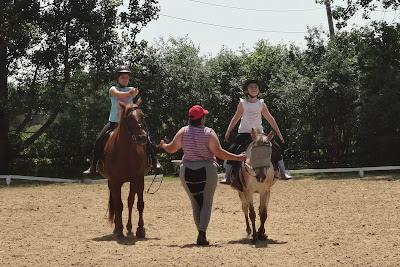 Look - it's running! You can see the dust! 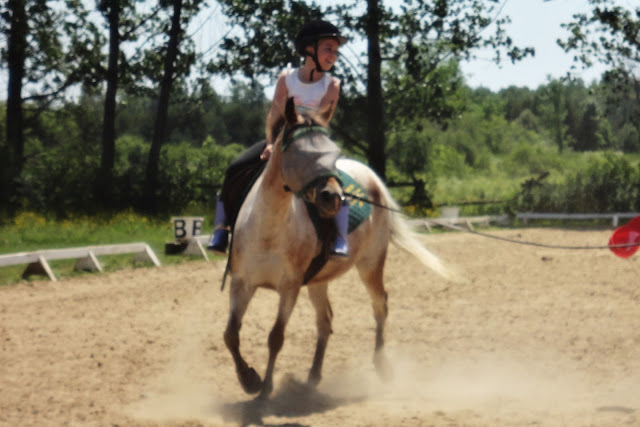 It was hot. Really hot. Once the girls were out in the paddock I realized that we had litres of sunscreen in the van and none on us. I got a ridiculous square-neck sunburn. Eve stayed lily-white - apparently you can't get sunburned while horseback riding. Also, we discovered that Caitlin is viciously allergic to horses, so if you go, bring Benadryl.  But on the whole, it was totally freaking awesome. Unlike today, which has now given me a headache. It's probably the weather.
Eve of destruction

Nicole said…
You should live here. I am serious. There are lots of jobs out here, there is a house for sale on my street, and it is never - NEVER - above 30 degrees Celcius. 30 degrees Celcius only happens about once a year, and it's such a freak occurance that Calgarians all think that it's either end times or they all simultaneously call in sick to work to PARTY. Also we don't have a humidex. Sure, your skin might peel off because of the dryness, but it's a dry cold. COME LIVE HERE WE WILL DRINK MARGARITAS EVERY DAY. Come move on to my streeeeeeeet. COME ON! DO IT! DOOOOOOO ITTTTTT. (did you ever see the movie Starsky and Hutch? Do it. DOOOOO ITTTT.)

If this is the most random weird comment ever it's because I am giving up dairy and I am in serious mourning. Well, I'm not totally giving up dairy. But I'm realizing that my eating five or six dairy servings a day is becoming detrimental to my health. And by detrimental to my health I mean I am breaking out so that I want to wear a bag on my head.
June 21, 2012 at 10:18 AM

Sasha said…
First of all, DON'T LISTEN TO NICOLE! YOU STAY RIGHT WHERE YOU ARE, unless you plan to move to Crystal Beach. That's OK then. We can totally drink margaritas every day.

Next - assignment? What are you working on?

PS Did I mention that I can practically see the Nepean Equestrian Park from my house? And that my neighbour dropped by last night to tell us he's moving? Take that, Nicole :P
June 21, 2012 at 10:26 AM

Denise Nielsen said…
My kids used to ride and so did I and we loved it....BUT it did kinda take up all Saturday morning, and as anyone who knows me knows, I'm a total slug on Saturday mornings (with some exceptions, such as tomorrow, when Andrew takes the two oldest kids off for a scouting "boat rescue" weekend and I'll get up to say good bye and then do something totally useful like go back to bed. But I digress.) Needless to say, we haven't been for a while, despite how much fun it is.

Oh, and I'm game for moving to Calgary to drink Margueritas every day. Then again, it sounds like Sasha at least is also up for margueritas right here in Ontario. Maybe Nicole should move here:)
June 22, 2012 at 3:37 PM

Shan said…
Yay Eve got horse back riding! Abby just had her last lesson until the fall. That means I get a break from having my heart in my throat Thursday afternoons because she's started jumping now! Glad she enjoyed it and since everyone else has thrown their hat into the ring... there's houses for sale in my hood too!!
June 24, 2012 at 2:46 PM

StephLove said…
It's going to be crazy hot here in a few days so I made cookies and soup stock, taking advantage of the relative cool.