Evie At the Bat

June 11, 2012
Anyone who comes here regularly knows about my love-hate relationship with baseball. Well, Eve's relationship with it is possibly even more tangled and conflicted. Admittedly, we stuck her in it the first year because Angus had been in it for a few years, he loved it, Matt was a coach and by this point we knew how it worked.

I don't know that I can assess her ability with any kind of accuracy, considering my own ignorance, but I would say that, as far as skills go, she's a bit above average. There were girls on some of the teams that didn't get a hit the entire season, and she usually got a couple hits a game, except for the year that her coaches couldn't pitch for shit. She's not great at staying focused in the field, but when she gets the ball she generally knows what to do with it. She's by far never been the worst kid on the team.

I do sort of admire that she's as enthusiastic as she is about the game despite the furor and public adulation and newspaper article whirlwind that surrounds her older brother. I think if that was me as a kid I would look for something he sucked at and then make myself an expert at it.

So this year is her first in minor, which means it's the first year that the kids pitch. In indoor training all winter, she was a pitching star. She could balance on one leg while bringing the other one up while all the boys kept falling on their butts. The coach asked her why she could do this so well and she said 'duh, you pick a fixed point in the distance to look at - you learn that on the first day of dance'. Then all the boys looked really scared.

Unfortunately, there's a big difference between pitching in a controlled clinic setting and pitching in a game. And if you throw a perfect strike in a game and the kid hits it, and the bases are loaded and the other team gets a bunch of runs off of it, you feel like crap even though it was a perfect strike. So she's been struggling with that.

Then there's the fact that when kids start pitching, batters get hit. Quite often. According to Matt, who's coaching her right now, the girls get hit even more often - they don't seem to have the body-consciousness that the boys have that allows them to flinch in the proper manner to get the ball to miss them. When he first said this, I wondered if it was sexist or inaccurate, but I have seen a lot of the boys contort themselves in a mysterious, Matrix-like manner while the ball skims by missing them by millimetres, so maybe he's right. THEN there's the fact that she bats left, and lefty batters also get hit with the ball more often.

It all adds up to guarantee that, all season, she's been a ball magnet. Bruises everywhere. In fact, when the Big Exciting Event happened the week before last, she'd already been hit once that game, on the outer thigh. So she was a bit reluctant to go up to bat again, but when you get hit by the ball you get to go to first base, and she was their only run so far from her last at-bat, so Matt, to his eternal subsequent regret, prodded her out to the plate.

She took a ball just below the sternum. She got winded. She started crying and hyperventilated. She said "I can't see" and passed out. They called an ambulance (I'm kind of surprised they didn't need another one for my husband). Someone called her name and she opened her eyes and said "did I fall down?" They put her in the ambulance and checked her over and then the paramedic said to Matt "I am now obligated to tell you that you should go to the hospital" and then mouthed "DON'T GO TO THE HOSPITAL". Then he said "I am going to give you these forms and you are going to sign them saying you are not going to the hospital against medical advice (DON'T GO TO THE HOSPITAL)".

When she got a home she was demonstrably done with all the fuss ("I'm going to go upstairs and try to go to sleep now so if you come up and my eyes are closed I DIDN'T PASS OUT AGAIN"), and yet she couldn't stop talking about it for days ("Oh great. Someone fainted in this show. THAT brings back memories."). At the next game, Matt told her she didn't have to bat and she decided not to. The game after that we really encouraged her to try so it didn't become an insurmountable fear. She did bat, and she got one foul ball and struck out, and the team applauded her when she came off.

Angus has been incredibly, clumsily sweet with her. He fixes her socks before her games. He makes her try on his fancy new catching equipment. He gives her very helpful advice like "you know you're supposed to turn away so the ball hits you in the back right?", to which she replied drily, "yeah, I need to work on that."

After their game on Thursday we were all sitting in the family room and the Jays game was on. Eve asked "do Major League players ever get hit by the ball?" and Angus said "ALL THE TIME. Well no, that's a lie.  But it happens sometimes" and at that very moment, the batter who was up, who was batting left, got hit in the EXACT SAME SPOT on the leg that she had.

She still says she'll probably play next year. Matt sings "What Doesn't Kill You Makes You Stronger" to her at every opportunity. There was also the great conversation when they got home that went: "It was the first game we've won in forever too." "We won?" "Yeah, after you passed out we got a bunch of runs." "While I was in the ambulance?" "Yep." Is distracting the other team with an unconscious player unethical?

At least she's not playing summer ball. I'd probably need a much stronger prescription. 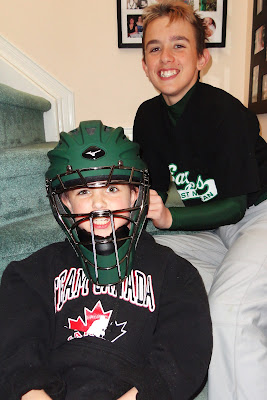 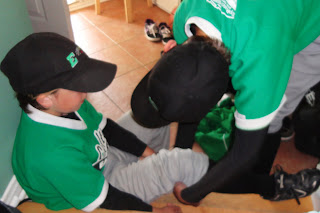 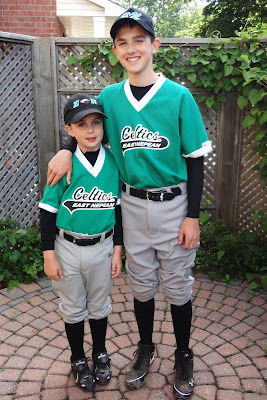 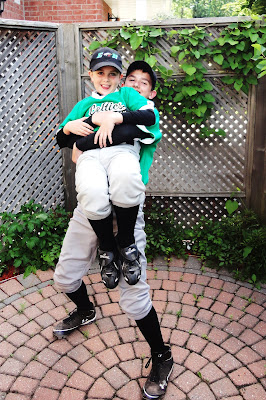 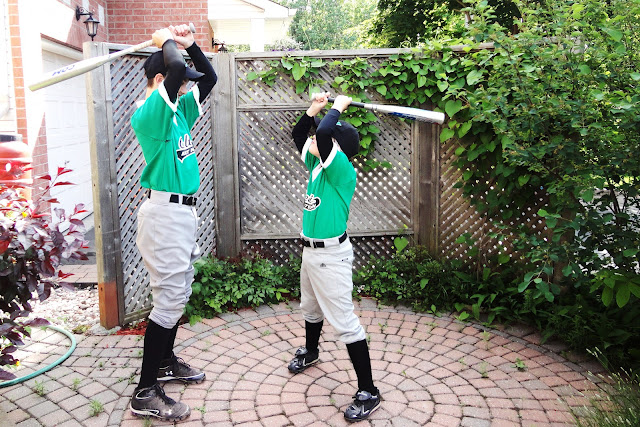 baseball Eve of destruction the general perversity of things

Nicole said…
Those pictures of her and Angus are absolutely precious.

Don't tell her, but I ended up in the ER playing slo pitch in grad school. Three woman rule, and there are few women in economics, so I was always on the field. Other teams knew I sucked (I really, really did) and would bat towards me because I could never catch. I took a line drive in the throat and ended up in the ER. Luckily my windpipe did not collapse, but my voicebox was bruised. Couldn't speak for days!

I caught one ball in my two years of playing, it was the last game of the season, it was a third out, and we actually won the championship (I was the worst player on a team full of ringers, so less impressive than it sounds).
June 11, 2012 at 1:31 PM

Hannah said…
Major league batters DO get hit all the time. Two consecutive Blue Jays got hit last week... in the exact same spot, on the back of the hand. So there's that.

You know my oldest is obsessed - summer ball starts tonight. And middle son claims he wants to play too, when he's old enough. I'm so glad we're still only at Sandlot level - my nerves aren't ready for anything else yet.
June 12, 2012 at 10:12 AM

Sasha said…
"You learn that on the first day of dance. Duh."

Marilyn (A Lot of Loves) said…
It looks like Angus grew about 20 feet since the last picture I saw of him.

I remember playing baseball once in high school. I was up to bat and got hit in the head with the ball which then knocked me out (I wasn't wearing a helmet - our school was too cheap to have them). And that was the last time I ever played ball! I don't miss it. Eve is a brave soul if she's still out there after getting hit so often.
June 12, 2012 at 10:23 PM

Patti said…
Oh my! I didn't realize she got hit with the ball. Never lost her sense of humour, did she?