It's been a strange week. Matt was in China (that was not the strange part. That was fairly normal, which suddenly seems a little strange, but whatever). Monday was beautiful and sunny. Pam and I went down to Dow's Lake to walk around looking at tulips and saying things like 'ooh, nice tulips'. Then Pam took a picture of me that made it obvious that 1) I've gained some weight over the past year or so and 2) When I try to suck in my gut it makes it look like I'm trying to stick out my boobs, possibly in two different directions. On the up side, my hair wasn't bad. 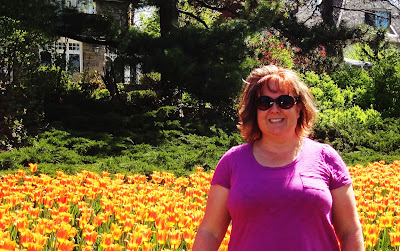 Monday night Eve had baseball (they won) but she was already starting to get sniffly and Tuesday she stayed home from school with a bad cold. Her nose was running, but the worst cold symptom she gets is that her eyes tear up horribly. When she was young this was terrible, because she didn't understand that it was just happening because she was sick - she thought that if tears were coming out of her eyes she must be sad. Now she just finds it annoying.

The week was going to be a welter of tortuous logistics, with Matt away, Eve's Tuesday dance class and Thursday dance performance (at school for the art display night), four baseball games between the two kids and Angus getting braces. But Eve was sick, which meant she didn't go to dance class on Tuesday night, and Angus's first baseball game got rained out. This should have made me more relaxed. But Tuesday, I felt so exhausted and crappy that after Angus left for school, I got Eve breakfast and went back to bed, I let Angus play video games for too long in the evening, and by Wednesday morning I felt like I was lying at the bottom of a deep, dark hole with something heavy and immovable on top of me. 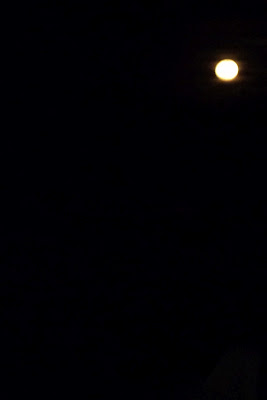 I sat at the computer while Eve lay on the couch all morning. I tapped keys aimlessly. I tried to breathe. Breathing felt really hard. I tried not to cry because I didn't want Eve to worry. I was kind of glad she was here because it felt like being alone would have been worse. I thought about asking Twitter for help, but then I felt like I'd been doing too much of that lately and it didn't see possible that it would help, which means I was further down than I've been for a long time. I felt the future disappearing.

But I had to take Angus to get his braces on. So I dropped Eve off at my Mom's and picked up Angus and acted normal. And Angus was funny and goofy and sweet and it wasn't morning any more (I'm starting to think that I'm 'not a morning person' in a slightly more intense and unfortunate sense than the usual one). And I started to feel better.

Thursday I got up and went to the gym and got on the treadmill, where I always listen to my ipod but still look up at the bank of televisions. I was hoping for I Didn't Know I Was Pregnant, because we all know how an unearned sense of superiority crushes the last of a depressive episode, but all I saw were sappy shows about children getting home makeover experts to built a garden for their recovering-from-cancer single Mom. I am not a sentimental person. Well, I am, but I have an overactive snark gland that always takes over before I can get too far down any sentimental path. So I was confused when water started dripping off my face when I didn't think I was sweating that much, and then I realized with utter horror that I WAS CRYING. ON THE TREADMILL. AT A SHOW ON THE LEARNING CHANNEL.

I took a deep breath and looked away from the offending show. Directly at a clip of a soldier returning from Afghanistan, who was crouched down while his six-year-old son with cerebral palsy who doctors had said would never walk WALKED ACROSS THE ROOM TO HIS FATHER, JESUS CHRIST THEY'RE TRYING TO KILL ME. I looked away from the televisions and tried to concentrate on the music.

Oh for fuck's sake. I probably would have cried if it was this song. I started laughing, which just made me feel even more like I was completely losing my shit. I took deep breaths and stared directly ahead of me. At the defibrillator.

Today was sunny again, and I was fine. I never used to be that big a fan of the sun - it was, I don't know, too bright. Too obvious. Now I practically need a goddamned prescription for it. Pam and I tracked down Suzy Q. Holy mother of fuck, Suzy Q makes a MAPLE BACON doughnut. And one with FROOT LOOPS on it. And they all taste exactly like a sunny Friday when you've been Horribly Depressed and aren't any more - no, really, that's objective, I'm almost sure of it. And then we went bathing suit shopping and even THAT didn't bring me down. Plus, Pam was in a total badass mood. My overly polite and deferential BFF, the woman who watches people not scoop up their dog's crap and then says good morning to them anyway, DID NOT let people merge several times - it's true, I witnessed it personally. Also, there was a group of teenagers, some of whom butted obnoxiously in front of us to get on the escalator, so while I stood demurely to the right as we rode up, she parked herself solidly on the left so none of the others could get around us. Also, she drove my van so I didn't have to because sometimes I'm too anxious to drive.

It's stuff like this that makes me happy to pay for her doughnuts every now and then.

Now it's Friday night. My husband is home. My son is at a sleepover. My daughter is asleep, having first explained to me in vivid detail this fabulous new movie she's just discovered called The Parent Trap which is Sick And Awesome. And did I mention I got to watch my daughter dance to Kung Fu Fighting while wearing a duct tape belt? Here's a blurry photo or two as proof. 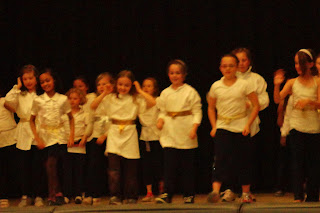 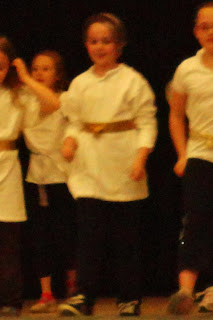 It's been a strange week.

Denise Nielsen said…
You describe it so awesomely. You have a real gift even for making light of those dark moments. Still laughing at the mental picture of you and Pam being bad asses...oh, and the overactive snark gland. LOL
May 12, 2012 at 6:51 AM

Nicole said…
That is exactly how me - and Jake, too - get sick with colds: the horribly watery eyes. It is the worst symptom to have, in my opinion. I envy people who do not present in this way. Because there's nothing worse than having red swollen eyes that you cannot see out of and everything is miserable and aaaahhhhhhhh.

KUNG FU FIGHTING! That is so great. Sorry you have been so sad. I hope you are feeling as sunshiny as tulips and Froot Loop doughnuts. xoxo
May 12, 2012 at 7:01 AM

Ms. G said…
Maybe it just had something to do with Wednesday, because I burst into tears in the car while reading a book and my husband just looked at me like he was considering losing me at the next rest stop : )

Sasha said…
I don't even know where to begin. Love the funny. Love the snark. The gym episode was awesome. Hope you're feeling better, depressive episodes suck.
May 12, 2012 at 7:00 PM

Sandra said…
Looks like you and I had similar weeks. Except I was not having a good hair day during any of it, and you have terrific boobs! Suck in your gut all you want, I love it when you post pictures (yes, I'm a boob woman!) You made it through to the end of the week though, rejoice! Only 2 more months till summer vacay, then we can breathe again!
May 13, 2012 at 8:30 PM

Sarah McCormack said…
sounds like your daughter may have seasonal allergies- sniffy nose, watery eyes, a cough..all signs of that and it is prime time for that right now!

i give my son children's CLARITIN each morning in April/May and it seems to help but not completely prevent all the symptoms.

Ioana-Carmen said…
Hy sweetie! Lovely post! Check my blog and tell me if you wanna follow each other?!:X