Mondays on the Margins: Your Voice in My Head by Emma Forrest

May 21, 2012
The last time I was at Chapters, I looked at a book in the biography section that struck me as interesting, so I got it from the library. It was called Your Voice in My Head and the author was Emma Forrest. As soon as I started reading it, I realized I had read an article in the paper, a few months or a year ago, about the author and the book. The article went into a fair bit of detail about an affair the author had had with Colin Farrell. Also, there was a picture and her hair was awesome.


Well, I thought, I'm never going to read THAT book. 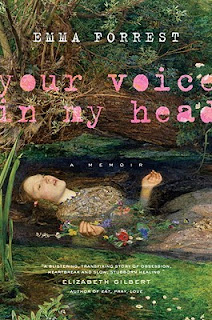 From Goodreads: Emma Forrest, an English journalist, was twenty-two and living in America when she realised that her quirks had gone beyond eccentricity. A modern day fairy tale of New York, Your Voice in My Head is a dazzling and devastating memoir, clear-eyed and shot through with wit. In a voice unlike any other, Emma Forrest explores depression and mania, but also the beauty of love—and the heartbreak of loss.


It wasn't bad. There's sort of a Catch-22 situation, I think, about memoir writing, which is that, if you're a crappy writer, people reading the book (and by 'people' I mean 'me') are annoyed by your crappy writing but it does sometimes convey a sort of rough authenticity, because you haven't been able to beautify your pain with eloquence and metaphor. If you're a really good writer, conversely, you always run the risk of writing too well about your crippling depression and multiple suicide attempts, in which case people reading the book (and by 'people' I still mean me) are automatically suspicious about how tormented you really are when you manage to describe bodily fluids, near-death experiences and incarceration in psychiatric wards with such wit and wisdom. Maybe the problem is that the people reading are just sort of bitchy and impossible-to-please? Nah.


Also, do you think it's worse if a person who has slept with a lot of famous people is a name-dropper or a name-withholder? The widely-held consensus is that Forrest's 'Gypsy Husband' is Colin Farrell - their relationship is well-publicized, and there are no pictures of her with other movie stars - but she doesn't name him in the book. She also mentions dating "a writer who is almost as famous for his tumultuous private life as he is for his award-winning work", and in interviews she states that she's dated several movie stars, but "Colin is the only one I ever got caught with" (because it's so embarrassing dating movie stars that everyone tries to hide it, natch).


Leah McLaren, when Forrest plays coy about the Colin Farrell thing in an interview, says "It’s simply unreasonable to accept public adulation for laying yourself bare one moment, then behave as though your privacy is being invaded the next." I sort of get that, but on the whole I think I prefer Forrest's decision not to use names - it's only just a bit less obvious and self-aggrandizing, but it is still less so. She does mention running into Heath Ledger shortly before his death, in a wistful anecdote where she imagines that the coffee they had together was a magic coffee that prevented his subsequent overdose.


It's a book that could have been annoying, but for the most part it wasn't. Forrest has written three novels and is now a screenwriter, and although there are definitely moments where she makes being bipolar and suicidal in L.A. sound a little more screen-worthy than it probably should, and the description of Gypsy Husband is right over the top, her description of the psychiatrist who changes her life (maybe - I'm not sure she wouldn't have gotten tired of all the cutting and squalor and bad sex all on her own) is quite endearing. And the way she talks about her parents is charmingly hilarious.

I wouldn't have been outraged if I'd paid for it. As a free read it was quite good.

"I think my mother has the sense of doom, and guilt about the sense of doom of Jews her age who weren't directly touched by the Holocaust. When she was growing up in New York, the first bad thing that happened to her was that Irish children moved into the Jewish neighbourhood and stole her kazoo and her sailor hat. She was a fat little girl, guarding the cakes she had hidden in her sock drawer. What was a fat child in 1940s New York, without her kazoo?"

"[Dr. R.] was cheerful. He was an eternal optimist. There was nothing I could tell him that he'd tell me was as bad as I'd decided it was. 'Oh, and then I murdered a drifter. I stabbed him twenty-two times.' 'Only twenty-two times? That's fewer than twenty-three.' I trusted him completely. And I liked how he saw me. It's that simple."

"There's still a fresh flower [a scar from self-cutting] on my upper right thigh, and I can tell from the nonchalant reaction of bikini waxers that they've become used to this sort of thing: girls who want to prettify and uglify, and cannot find a difference - like that hypothetical circle where communism meets fascism."
books 2012

Sasha said…
The only trouble with such a well-written blog post is it's so hard to come up with a witty comment worthy of it.

Wrath Of Mom said…
You really do write the best book reviews. I like that you use books as a starting point for other discussion. So even if I'm not going to read the book (and honestly I might take this out of the library just so I can read about Colin Farrell) I am always amused. And I learn stuff.