May 04, 2012
I keep trying to blog but being thwarted. It's Angus's birthday on Sunday but Matt's leaving for China or Estonia or wherever-the-fuck tomorrow night so Angus has three friends over for Laserquest and a sleepover tonight. I had to bake a cake. Here's the cake: 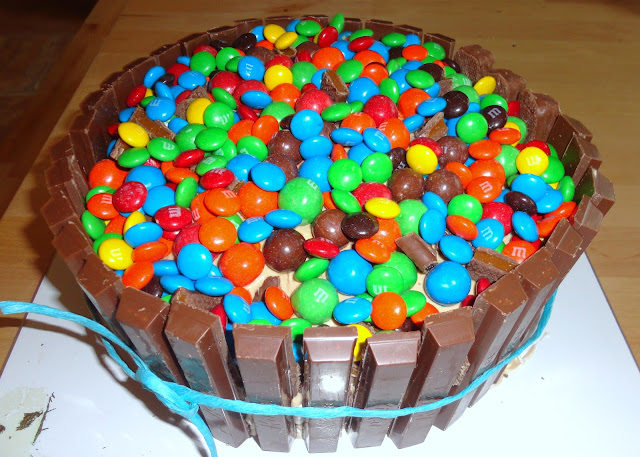 Is that not freaking awesome? Here's where I got the idea. It's double awesome because it looks impressive on the outside and yet the actual iced cake can be a bloody mess, which iced cakes INVARIABLY ARE when I make them. I was short one KitKat, so those slightly different lumpy things over there are Reese sticks. Because even when something's dead simple, count on me to find a way to bugger it up.

Then I had to take a picture of the cake. Then I tried to load the pictures from the memory card onto my computer and it did that thing where it said I had to reformat the card to use it, which would erase all the pictures, including the ones from Eve's birthday party, which, granted, was in February and now it's May, but still, sucks to be me, FUCK OFF. So then I tried it downstairs and it didn't work but in a different way, so then I tried another memory card in my computer and it still didn't work, but when I stuck the original one back in it suddenly worked. Isn't it funny when all it takes to make a day better is something going horribly catastrophically wrong and then turning out not to be?

Every time I cut oddly-shaped fruit I always cut towards myself, and even though I know this is asking for trouble, when trouble occurs I am always both surprised and outraged.

I went to the allergist. He was nice. And weird. Possibly slightly mentally unhinged. He wanted me to do a breathing test that measured exogamous nitrous oxide or something - wait, that can't be right, exogamous means marrying outside one's tribe or clan. It was probably endogenous. Possibly indigenous? Hey, have you seen this? I never would have guessed so many people would misspell 'vicariously' as 'bicuriously'. Look, a squirrel! Anyway, this device that measured the outwardly-marrying, originating-from-within, ethnic-and-probably-soon-to-be-persecuted-and-eradicated-by-war-or-disease nitrous oxide is apparently a little finicky, so he cautioned me that I would have to breathe out 'not too fast, not too slow -- like Goldilocks', and said he would coach me. The thing is, once you reach the optimum blowing speed (never typed those words altogether before, I don't think) the thingy lights up and a little happy face appears. So he really didn't need to be standing uncomfortably close to me going "Perfect! Perfect! Perfectperfectperfectperfectperfect" the whole time I was blowing and trying not to explode in hysterical laughter.

Anyway, the verdict seems to be that I'm allergic to.... nothing!

Awesome. So it's more of an... existential allergy? Ah well. Ruled some stuff out and didn't bail on the appointment and spend the day curled up in the corner drinking gin, so... win?

Happy Friday. I'm eating mango. And there is a bandaid on my finger.

StephLove said…
That's some cake. You are going to get the reputation as the cool mom among 12 year old boys. Or they'll demolish it and forgot all about it. One or the other.

Julie said…
what the fuck was that? my head is still spinning.

Nicole said…
At least you didn't find out you were allergic to something you love.

Hannah said…
I made that exact same cake for the school's spring fling cakewalk last year! Most genius cake idea ever.
May 5, 2012 at 11:40 AM

Ms. G said…
An absolute win! And that cake is freakin awesome! Oh, and Happy Saturday! I'm eating poundcake and my toe nail polish is chipped.
May 5, 2012 at 1:34 PM

Mary Lynn said…
Shit...apparently I can't do typos when I actually WANT to do typos. Was supposed to be "Hippocrates was SUCH an asswhole."

Mangos are practically impossible to peel without cutting yourself. But so yummy. It's worth it.
May 6, 2012 at 8:41 AM

Patti said…
Holy cake! I think I have diabetes from looking at it. And brain damage from reading this post. What was I typing again?
May 7, 2012 at 8:32 AM

Jane said…
You already said it but I'm going to echo the sentiment. This cake is awesome. And I have just the little boy who's going to love this!
May 7, 2012 at 10:27 AM

Suniverse said…
I cut EVERYTHING toward me. Which I know is wrong, but I can't stop myself.

I love the cake - plus, the Reese's part are just added specialness.

Maggie said…
Whew that link caused me to nearly cry at the office. Smelling your boyfriend's colon should not be someone's favorite thing...
May 7, 2012 at 3:59 PM

Susan Bodendo/Super Earthling said…
Wow! That is without a doubt the most awesome looking cake ever! But I think it's far too good for kids--this is adult indulgence cake at its finest! :D

Your allergist sounds like a real screwball. I have a doctor like that too. Makes you real confident in the medical profession. LOL
May 8, 2012 at 4:59 PM

clara said…
Yay, you went to your appointment! I totally forgot to come and browbeat you. That guy sounds kooky.