Mondays on the Margins: 419 by Will Ferguson 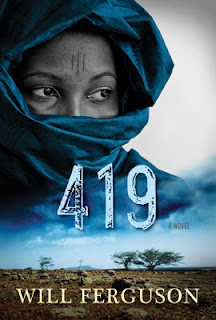 419
Will Ferguson
A startlingly original tale of heartbreak and suspense
A car tumbles down a snowy ravine. Accident or suicide?
On the other side of the world, a young woman walks out of a sandstorm in sub-Saharan Africa. In the labyrinth of the Niger Delta, a young boy learns to survive by navigating through the gas flares and oil spills of a ruined landscape. In the seething heat of Lagos City, a criminal cartel scours the internet looking for victims.
Lives intersect, worlds collide, a family falls apart. And it all begins with a single email: “Dear Sir, I am the son of an exiled Nigerian diplomat, and I need your help ...”
419 takes readers behind the scene of the world’s most insidious internet scam. When Laura’s father gets caught up in one such swindle and pays with his life, she is forced to leave the comfort of North America to make a journey deep into the dangerous back streets and alleyways of the Lagos underworld to confront her father’s killer. What she finds there will change her life forever ...
From the internationally bestselling travel writer Will Ferguson, author of Happiness™ and Spanish Fly, comes a novel both epic in its sweep and intimate in its portrayal of human suffering. It’s a story of love in a time of darkness, of one woman’s search for redemption, and of a young boy who will triumph above it all. - from Penguin Canada.

I was a bit surprised when I started reading this, because I think I assumed, with a sort of unattractive level of smugness and naiveté, that no one ever fell for the Nigerian email scam (which is called the 419 scam because of the article of the Nigerian Criminal Code dealing with fraud). Not because I haven't myself been swindled by the most preposterous stories imaginable, but because... well, I don't know exactly. I certainly never considered the people behind the scams, which the character of Winston forces the reader to do. The fact that someone would actually consider this type of thing a career, even consider it legitimate in a way, is a completely new perspective for me. It doesn't make him sympathetic, or conjure up any kind of justification - indeed, his contempt for his victims is really quite off-putting - it just creates a story where, in my mind, there really wasn't one.


Nnamdi, the least sophisticated character, is probably the most sympathetic, along with Amina, which always makes me a touch suspicious, but I got over it. Laura's father seemed above reproach, but he is only viewed through her memories. Laura is the character who twisted the most in my estimation; at the beginning I felt sympathy for her, and admired her singleminded pursuit of revenge. By the end I just felt like she was self-centered and incapable of grasping any other reality besides her own. Maybe that's just what grief does. And, that said, the scene where Winston scream through the phone, "We are mafia! We will ruin you, we will leave your life in tatters! You will die in Lagos!" and she counters with "Tell your mom and dad I said hi" is huge enjoyable.


The contrast between the Canadian setting and the Nigerian ones is vivid and effective. The description of how the thirst for oil destroys an entire way of life is extremely upsetting (I say, or type, on my laptop, in my well-lit kitchen, with my kids watching tv in the next room). The use of dialect is perfectly balanced - enough to evoke the difference of the people, not enough to be alienating. I love the description of Nnamdi's and Igbo Joe's ("I'm not Igbo! And my name's not Joe!") road trip - a sixteen wheeler on the back roads of Nigeria. There were several times during the trip when I thought things were going to go horribly wrong, with roadblocks or soldiers, and then I realized I was reading it like a horror movie, instead of what it was; an illustration of how everything has ALREADY gone horribly wrong.


"Epic in its sweep and intimate in its portrayal of human suffering" sums it up pretty well. I couldn't stop reading this. The story, especially the ending, was less sentimental than I kind of wanted it to be, but more hopeful than I expected it to be.


-"These 'formats', as they were known, targeted stupid greed, people who snickered even as they schemed to steal from who they thought were gullible Nigerians. Winston was looking for intelligent greed or, at the very least, thoughtful greed. His approach was more.... refined."


-"He was no mere wayo man, a trickster, a huckster, a carnival conjurer. He was a true guyman, living by his wits, outsmarting the odds. This was what he told himself to buoy his spirits when he felt adrift."


-"It seemed she had always been walking, had been born of walking, could hardly remember a time when she hadn't been.... When a sudden gust - as hot and dry as camel's breath - threw itself against her, it was the Sahara itself that gritted her eyes, made her cough."


-" 'Commerce bears the fruits of history, Adam. If we Nigerians are good at thieving, we learned it from the British. We may plunder bank accounts; they plundered entire continents. But I say to you: if distrust is stronger than trust, and hate is stronger than love, envy is stronger than adulation. And I assure you, we will take back our share of what was stolen. The banks in Europe and America - rolling in money like a pig in slop, they have grown fat on our misery... Make no mistake, Adam, we are in the business of revenge.' "


-" 'I don't trust any city where the traffic lights work,' Joe said. 'Do you know how much that slows drivers down?' He hated touching the brake pedal.'"


-"These underground explosions had caused cracks to appear in the cement walls of Nnamdi's home, hair-thin fault lines that only got bigger. He would lie on his mat under the mosquito netting and listen to the dull thuds of Shell Men chasing the echoes of oil. He could feel the vibrations under his mat, would watch orange shadows play along the walls, would dream of hearts buried in oil."

Nicole said…
This looks interesting. Dammit. I need to make a list. I'm halfway through Anna Karenina and I just can't read anything else until I finish...and I might forget. Hey, can I email you for ideas? Or I could look up your stuff on goodreads.
April 2, 2012 at 10:23 AM

alison said…
It looks interesting. Once, about 16 years ago, I got a Nigerial scam letter -- snail mail. That was before I had heard of them. I threw it out. Now, I wish I'd kept it.