How to make a day

March 19, 2012
Scintilla prompt Day 4: What does your everyday look like? Describe the scene of your 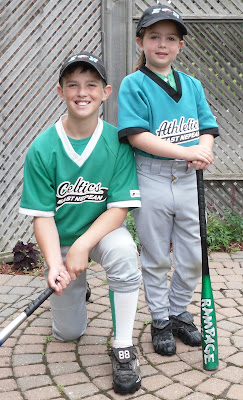 Anonymous said…
We do 'goddamned baseball' too. Only one kid so far, but it's still two nights a week and it starts in mid-June and runs until Labour Day.

In fact today was warm and beautiful, so out came the glove and H. pestered both his dad and I to play catch.

I love to hear about your days. Your kids are that much older than mine, it's like looking into the not-too-distant future.
March 20, 2012 at 4:45 PM

clara said…
Lovely end to the day. Books and children and pages turning...sigh.

I was never a team sports person growing up (but I am a team player just ask my resume!) but with two children I think odds are it will be 'goddamned something' eventually. Not soccer though. Not bloody soccer.
March 20, 2012 at 5:36 PM

StephLove said…
That's a nice picture of your day, especially the close.

I've been working part-time at home since my youngest started kindergarden this year and the house is only marginally cleaner. It took me a while to realize time was not the problem. I have a definite plan to sweep and mop the kitchen floor...tomorrow.

I'm so sorry sleep is an ongoing issue for you. I hate not getting enough sleep, hate it with the white-hot passion of one thousand suns.
March 21, 2012 at 7:05 AM

StephLove said…
p.s. It's great they both play baseball, though I'm not sure how I'd handle two with extracurriculars. Our older one is a bit of a homebody. He does play in the school band, but practice is at school so I don't have to ferry him anywhere. The younger one just finished basketball and yoga and doesn't start kung-fu for a few weeks so we're in an extracurricular interregnum.
March 21, 2012 at 7:07 AM