Book Review: The Invisible Ones, by Stef Penney 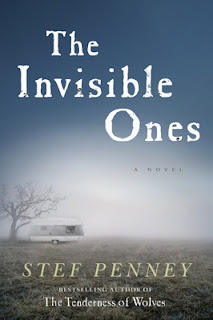 The Invisible Ones by Stef Penney, embodies everything I revere about the mystery genre.  Not the simple collection of tropes that comprise a whodunit or a 'thriller', but a mystery, in the most gracious and wide-ranging sense of the word; a work that is about trying to find something, and, in that finding, to address the sense of loss that inevitably accompanies being a thinking person in this world.

Ray Lovell isn't a new type of character - the world-weary, battle-scared private investigator - but he is a fine example of the type.  Half Romany, half 'gorjio' (a pejorative term gypsies use for non-Gypsies), he was raised in a house rather than a caravan and is fairly distanced from his heritage, and yet he feels a kinship with Leon Wood, who hires Lovell to find out what happened to his daughter Rose, and with the Jankos, the family Rose married into who claims to have no idea of her whereabouts (I apologize sincerely for that sentence, but I don't have it in me to go back and start over).

Ray is confined to a hospital bed, partially paralyzed and suffering memory loss, trying to trace which of his interactions with the Jankos led to his current state.  The other side of the story is carried by JJ, a teenager who lives with his single mother on the Jankos' site; he gives a perceptive and absorbing account of being a Romany in a world that often views his kind with suspicion and animosity.  As the only young person he's also an outsider even in his community of outsiders.  He lives with his grandparents, Jimmy and Kath, his great-uncle Tene, his mother and Ivo, JJ's uncle and Rose's husband.  Rose also reportedly left behind Christo, her son by Ivo who suffers from 'the family illness', an obscure disorder that renders him weak, unhealthy and small for his age.

The story is rich with themes of family, community, otherness and different levels of bereavement.  As a private investigator, Lovell is still plagued with the dilemma of whether it is always best for the lost to be found or the truth to be uncovered.

I love labyrinthine stories tracing the disappearances of people.  I love stories about Gypsy culture.  I love stories with a vibrant web of characters and an underpinning of melancholy with a hope of connection and redemption.  This book has all of those things.

The Invisible Ones has been extensively well-reviewed, even receiving what always induces me to read a book, the coveted starred review in Publisher's Weekly,  Penney's author video is here - I love her voice.  I am the caboose of a blog-tour caravan of The Invisible Ones, which was reviewed most recently at Curled up with a Good Book and a Cup of Tea yesterday.  I haven't read any of the other blog reviews yet because I'm always afraid of unconscious plagiarism or getting stage fright after reading someone else's brilliant prose, but I'm off to look at them now.

"I don't often think about my -- my what? Race? Culture? Whatever word the sociologists are using these days" (ways in which they weren't really 'Travelers'). "But despite them, we knew things.  I (especially me, as the dark one) knew what it meant to be called a dirty gyppo; I knew, too, about the long, petty battles over caravan sites, and the evictions and petitions and squabbles over education.  I know about the mutual distrust that stopped Leon from going to the police about his daughter -- or to any other private investigator.  I have some inkling of what made him come to me, and I realize that he must be desperate to do so."


"Sometimes you can know too much.  Of all people I know this to be true.  Ignorance is bliss.  Knowledge is power.  Which would you prefer?  I have seen countless people walk in through our door, having, like Mr. M., chosen option B.  They end up miserable, and paying me to make them so.  Because they have to know.  I once asked another client -- a likable man -- if, having found out his wife was unfaithful , he wouldn't rather go back to living in ignorance, and he paused a long time before answering .     'No, because there was something I didn't know.  She knew, and I didn't.  And that was stealing my life.  All the time she lied to me, I didn't have the choice about whether to stay with her or not.  She had the choice and I didn't.  That's what I can't bear.  The years I lost.'"


The dark is nearly complete in my sitting room.  It's the time of day the French, so I'm told, call entre le chien et le loup -- between dog and wolf.  First the sun sets, then, as dusk deepens, when the sky reaches a certain shade of dark blue that is not yet black, the dog retreats, and the wolf is waiting in the wings, or padding toward us around the corner.  The shape in the shadows could be friend or foe.  I wonder how long it lasts, the moment that belongs to neither."

Disclaimer: I was sent an Advanced Reading Copy of this book by Penguin Canada for review purposes.  Opinions are my own.

Ms. G said…
" to address the sense of loss that inevitably accompanies being a thinking person in this world." Wow.

Mary Lynn said…
I hadn't read many mysteries until my appreciation for Kate Atkinson led me into the genre (when she began writing the Jackson Brodie mysteries). Your review certainly makes this book sound intriguing. Maybe I'll branch out and read a mystery from another writer.

At the very least it's an excellent gift idea for my mom, who LOVES mysteries and gobbles them up on a regular basis.
February 2, 2012 at 10:46 AM

Patti said…
You had me at "embodies everything I revere about the mystery genre".

I luuuurrrrrrrrve mysteries. The structure of mysteries is a comfort when the exploration of loss and what it means to be human scares and frightens me.

Marilyn (A Lot of Loves) said…
Now I need to know what happens in the end! Sounds intriguing.

Also, reading this review makes me a little jealous that you get "grown-up" books to review. Not that I don't love the young adult books that I get sent...because I do, thank you, Penguin!...but this one sounds so refreshingly mature.

Anonymous said…
I've got book club tonight. I'm going to print off your review and recommend that we add "The Invisible Ones" to our 2012 list. We love to read a wide variety of genres - just so long as the books are good. Thanks for a great review. Zarah
February 2, 2012 at 1:38 PM

Trish said…
I, like Mary Lynn, limit my mystery-reading almost exclusively to Kate Atkinson. This one sounds equally smart, though, and I've put it on hold at the library! Thanks!
February 3, 2012 at 7:24 AM