To Neti Pot or Not

I have allergies. Hardcore, nasty, year-round allergies. This started around the time I turned thirty and started having babies (which is kind of cool, because as with so many other things, I can blame the children). I use Nasonex daily, but I frequently also have to take an allergy pill. My doctor suggested a couple of years ago that I also use Hydrasense to flush out my sinuses. I did use it for a while, and then a friend told me that I should get a neti pot instead for nasal irrigation (or nasal douche, as the Wikipedia article says - join me in an adolescent giggle at the word douche, won't you?), because it's a lot cheaper than buying Hydrasense, which is really freaking expensive. So I did.

I suck at the neti pot.

Hydrasense, while being really freaking expensive, has a fairly long, skinny nozzle that you can jack right up into your nostril to fire that stream of salty water into your sinuses. My neti pot has a roundish nozzle that you have to position just right against the opening of your nostril. Then you have to angle your head just right to get the stream of water aimed properly. For me, this works about 30% of the time. The rest of the time I either almost drown myself or just end up pouring water all over my face and feeling like an extreme dork.

Because I'm almost always so stuffed up, it almost never works like the (faintly disturbing) demonstration pictures or videos, where you pour it in one nostril and it flows steadily out the other one. I'm happy if at least some of the water goes in part way and .... well, that's actually enough said about that. 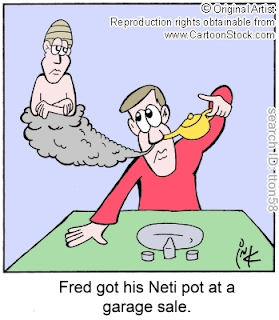 In related news, maybe don't go out and get really drunk, decide you're too drunk to have sex with your husband, perform your usual night time ablutions including neti pot use, and then decide that you're not too drunk to have sex with your husband after all, because you might find an ill-timed stream of salty water - well, I was going to say ruins the mood, but the fact is he thought he wasn't getting sex and then found out he was, so really it had no effect whatsoever, so never mind.

Overall, I think the neti pot helps. But every now and then I indulge in a bottle of Hydrasense, because sometimes I just don't need another reason in the day to feel awkward.
the general perversity of things

I have used a Neti Pot exactly twice in my life. I had a raging sinus infection a couple of months ago and hey, preggo! no antibiotics for you! so I swallowed my utter utter disgust and used the goddamn thing.

I can't deny that it does offer relief, especially when you are very congested by nothing is, um, running free. But most of the time I'd rather just put a Magic Bag on my face and let time heal all wounds, ya know? There is something very weird to me about pouring warm saline up my nose.
December 5, 2011 at 10:14 AM

Nicole said…
Heeeeeee. I have a neti pot and I use it on occasion. It's pretty disgusting. The neti pot is super popular in yoga circles, which means that one morning someone was helping me and dripped on my mat. Their response? "Don't worry, I just neti-ed this morning." That does not make it okay.

StephLove said…
I have always been afraid to try that, but maybe if I had killer allergies I would.
December 5, 2011 at 11:02 AM

Trisha Causley said…
Oh man...I feel like gagging every time my mom talks about how "effective" her neti pot is. When she visits at Christmas, I'll be re-instituting our strict no-neti-pots-in-the-kitchen policy because I can't even eat when I know it's in the room.
December 5, 2011 at 11:34 AM

I would never touch a neti pot, but then again my sinuses do not at all drive me nuts.

Once a hippy chick convinced me that a clove of garlic up the phfttt-woo was the best cure ever for a yeast infection, though. Don't ever do that.
December 5, 2011 at 3:35 PM

Mary Lynn said…
Yah...I know some people who swear by them but the mere idea gives me the heebie-jeebies. Though I suppose I at least approve of them for the amusing blog posts they inspire (okay, only one blog post--this one--but in theory, there might be more).
December 5, 2011 at 4:26 PM

As for the neti pot, been there-tried that- thought my eyes where gonna pop outta my head as water leaked out of them! Apparently I have a deviated septum and nothing is going to cross over :P Who knew?
-Lynette
December 6, 2011 at 12:31 AM

Julie said…
i was just thining that i should use my neti pot tonight because i'm starting a cold and my nose is all itchy. and it coincides well with the fact that i will be going out to help a firend move, so really no chance of the hubby getting any tonight. thanks for the heads up!
December 6, 2011 at 11:54 AM

See, now, I am a nasal doucher whenever I have a cold. But I don't use a fancy pot. I use a medicine syringe, like you get in baby advil boxes? With a plunger? You draw up some warm salt water and squirt it up your nose, so it's more like the Hydrasense, but not $$$$ More like $0.99. Works well.

I will do just about anything to avoid another sinus infection. Because they are the devil.
December 6, 2011 at 1:46 PM

Wrath Of Mom said…
Since the advent of neti pots in North America I have never looked at a thrift store tea pot in the same fashion. I use this version -- same principle, more dignity. I'm thinking of buying this for my husband as a gag gift.
December 8, 2011 at 4:53 PM

Finola said…
omg men are hilarious.
And the thought of using a neti pot makes me feel like I am drowning, but I know so many people who swear by them.
December 10, 2011 at 6:40 PM

Marilyn (A Lot of Loves) said…
I use the Waterpik squirt bottle. Same idea as the netipot but less mess...at least in my case. Who needs nose water sprayed all over the counter? Not me.
December 12, 2011 at 9:45 AM