Under an Afghan Meatball

December 22, 2011
So Angus's class was having World Expo today - they all picked a country to study and present about. Angus chose Afghanistan because he wanted to write about the war. Which made me realize that I hadn't really talked to him about the war and didn't really know that he knew about the war and OH MY GOD I'm SCREWING EVERYTHING UP as a mother and... anyway. He wanted to make food to serve at World Expo. So we made meatballs with lamb and chickpeas and spices. They were okay - I don't really like lamb. I thought it was a little screwy to be making Afghani meatballs in the midst of Christmas craziness also, but what the hell, it was kind of fun.

So he came home from school and said "today was AWFUL. Well, I did my project, but Connor upchucked in class. And I was RIGHT BEHIND HIM." We asked him how his project went and he said fine, but clearly the classroom upchucking was the centerpiece of the day. When I told him I needed some serious meatball love for making meatballs the day before the day before the day before the day before Christmas, he said everyone really liked them. He went downstairs. Half an hour later the phone rang. He came up and said Connor wanted him to go over. I said are you the least bit serious? Not if he threw up today. Angus said "he said he's fine - he just choked on a piece of meatball." Then he said into the phone "my parents are rolling on the floor laughing. I'll call you back when they get back to normal."  In all the uproar I had to rewind the person being dismembered by a forest creature on my computer. What - you don't watch Supernatural while wrapping presents and baking? Blood and guts - ever so festive.

For Kelly and The Queen - I am heartily sorry. I had no idea that Swiss Chalet was a Canadian chain of restaurants - I just assumed everyone had them. I'm even sorrier that you're denied the wonderfulness that is the festive special. You know, it used to come with a Toblerone instead of the five Lindt truffles, and I was actually disappointed when they switched - I was young and clueless back then, obviously.

For Hannah - to match your shameful confession, one of my own, which has nothing to do with Swiss Chalet and I only thought of it because I actually told it to Collette while we were out yesterday and she told me it was so embarrassing I should never admit it to anyone. You know that song 'Kookaburra sits in the old gum tree'? I thought 'kookaburra' was the Australian aboriginal word for koala bear.

For Nan: my embarrassing but beloved reindeer ornament 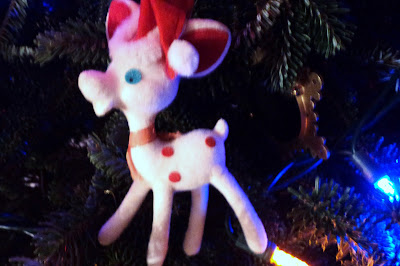 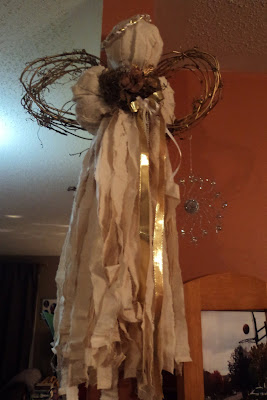 and my daughter's made-from-scratch angel (clearly the craftiness does skip a generation): 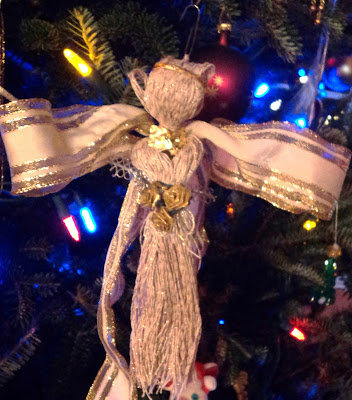 StephLove said…
I don't think I've ever watched a horror movie while wrapping presents, but I did listen to a sex advice postcast while addressing Christmas cards the other day. (The kids were at school.) Between the two of us we've got the taboos covered.
December 22, 2011 at 6:05 PM

Anonymous said…
I don't remember what I thought "kookaburra" meant, but I *do* remember the first time I saw a picture of one and I was all "holy shit, a kookaburra is a BIRD?!? Wow... that song makes much more sense now."

Lynn said…
I love that snowman your mom made! It's adorable. I have a snowman weakness. Snowmen are SO CUTE.

(Only a Canadian would ever say that!)

We are having Swiss Chalet take-out for dinner tonight (chicken + baked potato = gluten free JOY). The Chalet ROCKS MY WORLD.
December 23, 2011 at 6:03 AM

Kelly Miller said…
Toblerone is so much better than boring ol' Lindt truffles!

Nicole said…
I love those! Craftiness skipped my generation too. Actually, my kids are not crafty either - although they like crafts. WE ALL JUST SUCK AROUND HERE.

And girlfriend, you are crazy. LINDOR TRUFFLES. I am not even going to bring up the peppermint ones lest we get into a brawl here. Let's just say MORE FOR ME!
December 23, 2011 at 8:26 AM

Wrath Of Mom said…
LOVE THE ORNAMENTS! The reindeer is so cute!

Mmmm. Afghani meatballs sound great. I love lamb -- if I had my way we'd have roast lamb for Christmas in stead of turkey. I don't care for turkey or ham, which is why we have lamb for Easter. My husband always announces "Leg of the Lamb of God is now being served!"
December 25, 2011 at 6:05 PM

Finola said…
Hope you had a happy Christmas. And your craft is way better than all of my non-existent ones!
December 26, 2011 at 4:20 PM

Rachel Cotterill said…
Good on him for picking Afghanistan! :) and I hope you had a fabulous Christmas.
December 27, 2011 at 2:06 PM

Shan said…
Isn't Christmas unless you've had the festive special. Love the ornaments!
December 28, 2011 at 7:32 AM

Jane said…
Your son and mine should get together. He is obsessed with everything war related. His favorite station on TV is the Military Channel. I feel like the worst mom in the world!
December 28, 2011 at 5:53 PM