December 11, 2011
The second attempt at tree decorating went much better, even though we were still approaching the full moon. Although inevitably what begins like this, 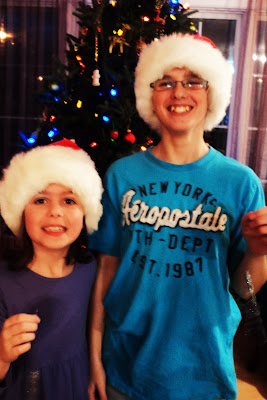 So of course the entire main floor of my house looks like half a Macy's department store circa Miracle on 34th Street got deposited in it by some random tornado and my husband's leaving for Japan in the morning. If I sit at the kitchen table and look in the direction of the garland on the stair rail and squint enough to block out the surrounding crap, I guess it's kind of Christmassy. Otherwise I still just feel kind of tired about the whole thing.

Pam and I went to the craft show on Thursday. We have a near unbroken record of starting these little trips out full of bitterness and loathing for all of humanity (we didn't make any skinny jogger jokes this time though). Pam was coming off a difficult evening and morning of melting down children. We got to the craft show at ten-thirty thinking it was open at ten and it wasn't open until eleven (let's just pause and savour the irony of me being somewhere TOO EARLY on any given morning) so we went to a nearby mall to kill half an hour. Pam said she needed coffee. I said have you not had any yet today and she said "I've had two, YOU WANNA MAKE SOMETHING OF IT?" I did not want to make something of it. Pam had coffee. I bought lettuce. We went back to the craft show. The craft show was fun. I bought the crucial last present for Matt's Dad and his wife which they probably won't like because I like it, but I couldn't find anything that was the exact opposite of what I like, so oh well. I bought curry hummus from the Hummus Man because he's so bald and smily and darling I always have to buy curry hummus from him even though by the time we get to his booth I can barely carry anything else, and frozen hummus is not feather-light by any means. I bought - hey, I bought smelly soap. What the hell happened to my smelly soap? Pam, do you have my smelly soap?

I'm tired. I feel like I'm stuck at the craft show with no way to get home. My husband's going to Japan in the morning. I'm going to bed.
Eve of destruction holidays Laird Angus McAngus

Wrath Of Mom said…
I hate craft shows. I don't hate them nearly as much as I hate farmer's markets but I do hate them less than independent bookstores that organize their stock using principles of feng shui. And I love all manner of hummus, even if I'm still undecided on the correct spelling of hummous/hummus/houmous/Hamas.

I would love to go to Japan.

Pam said…
No I do NOT have your smelly soap. Do you want to make something of it? But I have eaten all the toffee and love my coffee bean necklace. I love making Christmas all about me. I'd hit any crafty crap show anytime with you, babe! You make a loathing humanity day disappear in record time.
December 12, 2011 at 9:31 AM

Nicole said…
1) I completely relate to Pam. Two cups of coffee is not enough.

2) My house is Christmassy, but not in a magazine type way. More like in a random, insane way.

Anonymous said…
I love me a good craft show. But there is a special place in hell for people who think it is an appropriate place to bring one of those SUV sized strollers. (Very unChristmasy of me to be mentioning Hell during the festive season, I realize...)
December 12, 2011 at 10:43 AM

harriet glynn said…
I love to love craft fairs just their very existence sets my heart a flutter. Prob is this tendency to spend a schwack of cash. Love homemade soap - it's my downfall!
December 14, 2011 at 6:49 PM