November 24, 2011
It's been a good week. I got my passport renewed with much less drama than I anticipated, went for a great walk, worked in the library, made a kick-ass butternut squash soup, left dinner for my Cuba-returning parents and hosted a fabulous book club meeting. So naturally I woke up this morning feeling like a heavy, worthless sack of expired potential. So then I got up and ate a bunch of chocolate cookies instead of going to the gym because I'm a giant self-defeating stupidhead. 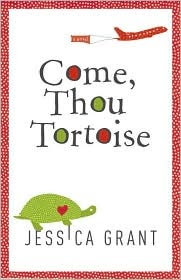 The book is called Come, Thou Tortoise. The author is Jessica Grant, who was apparently a New Face of Fiction. That doesn't make me bitter, even though I've never been a New Face of Anything, except maybe Giant Self-Defeating Stupidheadedness (sorry). I bought this book last winter, started reading it when I got to Algonquin early for my exam on an icy day, and almost missed my exam because I was so entranced with the book.

Audrey Flowers, aka Oddly, is one of the most charming characters I have ever encountered. She is the most unreliable of narrators, and certainly she is lacking a certain something, or maybe she has an extra certain something, or something. She doesn't put question marks at the end of her questions, which you might think would be annoying, but it isn't - it is enchanting. She also isn't averse to dropping the odd f-bomb, which as you all know is quite important to me, and if it takes this book out of the running for a few delicate flowers, well so be it.

Oddly has to fly back to Newfoundland from Oregon, where she lives with her tortoise Winnifred (who is a winning presence in her own right) because her father is in a coma (comma). She ends up, in short order, locked in a bathroom with a stolen gun negotiating with an air marshall through the door crack - and this is just in the first five pages. She goes home and is sad, wobbly, energetically misguided and very, very odd while navigating the grieving process and visiting her Uncle Thoby who lived with her and her father for many years. There is a white mouse, there are quirky and entertaining neighbourhood characters, there is a very persistent Christmas light vendor (who happens to be Jewish) who is intent on recalling some potentially dangerous defective Christmas lights. It all hangs together with the same wonderful, slightly skewed, no-question-marks rhythm, the Newfondland scenes interspersed with commentary from Winnifred's point of view as she languishes back in Oregon in the apartment of Oddly's friend Linda and her boyfriend, the very minor Shakespearean actor Chuck.

"Wordplay and hijinks" - I just got that from the back of the book. That says it pretty well. There are also some shenanigans - some are ever-so-slightly madcap.

I put this on the book club list even though I am usually hesitant to put books I love on, because I know it's not certain that everyone will love them and I don't want to have their flaws pointed out because SHUT UP, I just LOVE IT, okay? In this case it turned out to be a good thing because apart from a few minor quibbles everyone else loved it too, and also I had a few things cleared up for me that, despite reading the book twice, I totally didn't get.

Get this book. And don't be slow about it. Ha. Get it? Slow? Because it has a tortoise in it?
books 2011 confessions of an indiscriminate reader hear me whimper

Mary Lynn said…
Our book club read Come Thou, Tortoise at my suggestion, but I suggested it before I'd read it. Then when I finally did start reading it I got very very scared because I loved it so much and I didn't think I could bear it if no one else loved it as much as I did.

As it turned out, the book had a mixed reaction from my book club, but there were several of us who absolutely adored it so all was okay.

Denise Nielsen said…
Okay, ladies, you have convinced me. Come Thou, Tortoise is a book I've been waffling over getting for ages, and now I will. Thank you.
November 25, 2011 at 11:27 AM

Marilyn (A Lot of Loves) said…
This sounds highly quirky. I feel sad that I don't have a book club to participate in. I'll have to read this on my own I guess.

harriet glynn said…
Whoa! Thanks for the rec. Sounds right up my quirky little alley. Currently reading When God was a Rabbit which is super quirk a dirk.
November 25, 2011 at 7:49 PM