Mondays on the Margins: Book Review - Easy to Like by Edward Riche 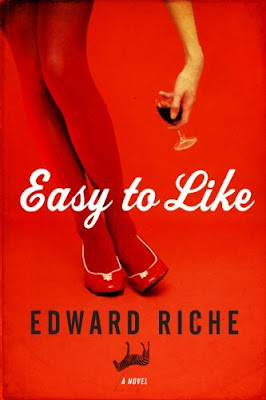 The synopsis from House of Anansi:


"A bitingly hilarious satire of the making of wine, television, and taste from one of Canada's most accomplished comic writers.

From award-winning author Edward Riche comes an immensely readable and sharp novel about "C"-list screenwriter and wannabe vintner Elliot Johnson. With his life growing more ruinous by the day -- his writing career is on the rocks, his struggling vineyard is being investigated by the feds, and his son, a former child star, is in prison -- Elliot decides to do what any self-respecting wine lover would do: escape to France.

Alas, fate has other things in store. Stranded in Canada by an expired passport, he is strongly encouraged to remain there due to his bit part in a growing Hollywood scandal. Deciding that Toronto may just be the perfectly engineered city in which to lay low, Elliot kills time by bluffing his way to the top of the Canadian Broadcasting Corporation.

A brilliant work of searing satire, Easy to Like showcases one of our most original authors at his comic best."

I'll be honest: this isn't my favourite kind of book. I tend to think satire works best in shorter pieces (think Jonathan Swift's A Modest Proposal), and can be hard to sustain - and sustain interest in - over an entire novel. But this book was saved by the fact that Riche writes real characters, not merely types on which to hang his biting social commentary.

Elliot Jonson is a snob. He doesn't want to make wine or write scripts that are "easy to like". Unfortunately, this means his winery is bankrupt and he can't sell any scripts. He's not obnoxious about any of it - I was actually quite touched by his quixotic yearning after the unattainable grape needed to recreate the ideal Châteauneuf-du-Pape. The rhapsodic musings on wine are almost incomprehensible to the uninitiated, but they read like a kind of poetry that is nonetheless pleasing.

Elliot's assistant at the CBC, Hazel Osler, is also a solid character - intelligent, perceptive and passionate. This is necessary to keep the whirl of buffoons, ridiculous programming and policy talk from degenerating into an indistinguishable morass. The send-up of the inner workings of the CBC will be entertaining to any Canadian, with Elliot and Hazel's relationship as a nice real-world counterpoint.

I enjoyed this book, although not quite as much as I enjoy following Edward Riche on Twitter:

EdwardLRiche Edward L. Riche
Unfortunate earworms hazard of having a 14 year daughter. I keep telling myself "I've got the moves like Jagger". This is not true.
21 Nov.

In unrelated news, anyone know how to do Twitter screenshots?

-"'We smell some dried cherry or cranberries, violets, and leather in the best examples, but it is hard to nail it down.' It was a maddening aspect of wine tasting, this search for taste and smell equivalencies. There wasn't a risk of sounding pretentious; there was a certainty."

-"'The Italians, to their great credit' - Elliot thought how much he would like to be, at that moment, in Italy - 'appreciate bitterness in food and wine.'"

-"'Not even going to take a meeting?' 'No, they are not.' 'Did they give a reason?' 'They don't think Brokeback meets Passion of the Christ has an audience. They don't buy the whole gay Jesus thing.' 'come off it, it's so obvious. In the new draft Judas betrays him because he's insanely jealous of this thing Jesus has with Mary Magdelene-'"

-"Châteauneuf du Pape began with Grenache - to which could be added Syrah, for a shiny pepper pelt and the durability of reinforced concrete; Mourvèdre for the funk of blood; and Cinsault, for volatility and polish. Counoise gave a fermented essence that Elliot called 'raspberry kimchi' and it brought to the wine what Mick Taylor had to the Stones. Vaccarèse was a spice: a pinch did the trick. Terret Noir added crisp acidity. Muscardin's role was an utter and essential mytery."

-"Some bald guy hosted the newscast. (You would never see that in the States.)"

-"With his years in the screen trade, Elliot now believed that the best film actors did nothing other than be utterly convinced by their own lies. The best performances came from actors who merely thought they were, at the moment, the character they were playing. They were dissociative psychopaths. They weren't method actors; rather, they were method humans."

-"Connie missed a critical factor in her analysis of his problem. Sure, Elliot wasn't being truthful with himself; sure, he wasn't facing the facts. But he was also self-aware. His was self-conscious self-deception. It was how one coped."

-"It appeared his predecessor was a tyrant; Elliot's comparative disengagement would be welcome. Probably, over time and in spite of himself, Elliot would become a better exemplar of the dickhead they expected. By their nature, most bosses were bullies and assholes."

-"'There is something unsuprising about California wine,' Marshall said. 'Do you think it's because it's grown by graduates of agricucltural colleges rather than by farmers?' Was there anything more humbling, more poisonously and profoundly humbling, than hearing oneself in an idiot?"

I received a copy of this book from House of Anansi for review purposes. Opinions are my own.
books 2011

Anonymous said…
Sounds interesting. But like you, I think sound bites of satire are more effective. A novel can wear you down. But this still sounds intriguing. I'll put it on my library list!
November 28, 2011 at 4:29 PM