November 01, 2011
Yeah, I could just quietly post every day in November without trumpeting that I'm doing NaBloPoMo and demanding that everybody marvel and praise, but that's just not how I roll, OKAY? Besides, if I don't constantly remind myself I might forget.
Halloween.
You know, when my kids were little and Angus always wanted to be a superhero and Eve always wanted to be a princess or a fairy, I used to be kind of annoyed. Because Angus was a superhero every day and Eve was a princess or a fairy every day, and it was BORING. I thought at the very least ANGUS could be a princess and EVE could be a Power Ranger, but no, for Halloween they'd wear a costume that had been worn dozens of times already. And I was annoyed by that.
My stupidity knows NO BOUNDS. You don't even want to know how much these cost. 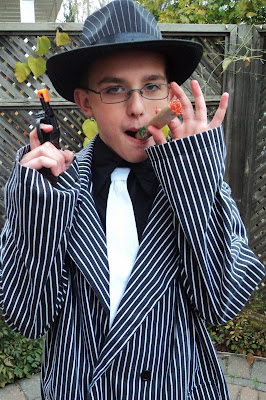 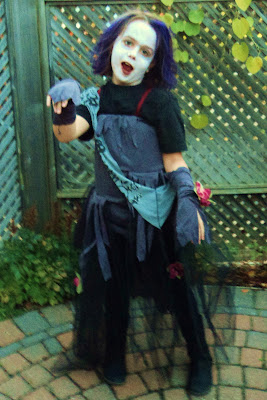 I always try to convince the kids that we should make costumes out of stuff we have at home, because it's much more fun and creative than just buying something. One year we pulled together a pretty cool Indiana Jones costume for Angus because he had this great corduroy blazer, and my husband had the fedora. We made a map for his pocket and all we had to buy was the whip. Every other year it's been store-bought all the way. Sometimes we would even have two or three different costumes, one for the school dance, one for our friends' annual Halloween party and one for trick-or-treating. Because, you know, I'm a sucker. At least this year they wore the same costume for everything.
Because I spent so much on their costumes, I was determined that mine would be cheap and easy. And not slutty, because I'm old and married and the party is all about consuming carbs and getting silly drunk, not angling to have drunken pirates leering down my Wonder Woman cleavage. Any more. 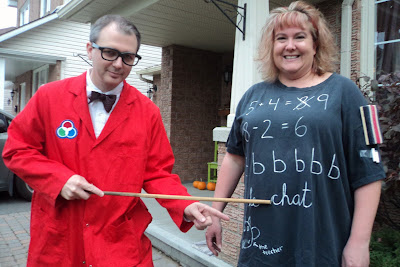 So my kids come home and see the shirt on the table and seem to have NO IDEA what it is. They get it eventually, but when Matt comes home and says "Cool - a chalkboard", I say "THANK-YOU - our kids are dumb!" Then when we get to the dance, my friend's husband says "Oh, neat -- but you know, they have Smart Boards now". I say "What the hell is a smart board?" And he says "you know, those things they have where you can move the letters around. You're so nineteen-nineties right now!"
Jesus Christ. A blackboard is now a retro costume? I felt like an eighty-year-old. No wonder the poor kids didn't know what I was. My friend's husband added that if some kid started feeling me up trying to move the letters, at least I'd know why. My friend, who's a teacher, wondered briefly if she should make a smart board costume for Monday at school, and then concluded that this would be likely to get her kicked out of the college of teachers, so I made her a chalk board shirt instead. Everyone knew what it was.
I always find the dance kind of excruciating. It seems like it should be fine - it's only two hours, Eve has a blast dancing her little butt off, Angus roams the halls with his friends eating junk food and theoretically I should just stand there talking to the parents I know. But somehow there are always large chunks of time when everyone I know has wandered off and I'm standing there like an idiot - Matt is usually just back from Australia or Japan or wherever-the-fuck, and I take pity on him and don't make him come and then feel incredibly bitter about it. So this year I volunteered, which means you man a table for 45 minutes, selling food or drinks or glow bracelets or telling people where the coat check is or where they need to go for their volunteer slot. And it worked - the time flew by, and then it was almost the end of the dance.
Last night was the first year Angus went out alone with two friends. Eve and I went with a friend and her daughter, and we came across the boys a couple of times - they studiously ignored us, of course, but it was confirmation that they were alive and not carrying eggs or toilet paper. I wasn't as anxious about it as I thought I might be.
Tune in next year - I'm thinking of going as a dial phone.
holidays nablopomo

Alicia said…
Your costume is awesome! My teacher friends always talk about these new smart boards too - I still don't get it. I'm thinking of starting this NaBloPoMo thing too!
November 1, 2011 at 9:42 AM

Patti said…
I'm glad you're doing napomomo or whatever it's called. I love reading your blog and there's going to be new things to read every day.

Lynn said…
Your kids look AWESOME! I didn't see anything like that when we were looking around at costumes, although we were largely focused on the superheroes and princesses.
November 1, 2011 at 10:44 AM

Marilyn (A Lot of Loves) said…
I like the costume. I've never creative enough to come up with a costume...of course I also don't like Halloween that much so that may be where my mental block comes from.

Wrath Of Mom said…
On my list of "Things That Are NOT Great About Homeschooling" I'm going to write I don't get to attend a school-sponsored Halloween party. Because it sounds like fun. My kids would totally get your very clever costume because they do lessons on a chalkboard at home. Hell, they even have their own SLATES.

Nicole said…
I love your costume! What a great idea! At least people knew you were dressed up, not like my neighbour who apparently just thinks I like to wear a lot of makeup.

I volunteered at our dance - actually I was co-coordinator - so I hardly even got to shake my booty. Well, not that I would shake my booty at the school dance. Tap my toe. Or something. Is this the longest, weirdest comment ever? MAYBE.
November 1, 2011 at 6:23 PM

We had a garage sale for Mike's Grandpa and Maya could not figure out what the dial phone was. She was fascinated by it.
November 1, 2011 at 8:30 PM

alison said…
I like the costume, and I know all about the multiple costumes -- this year, Rae was Princess Leia, a mime, and the Paper Bag Princess. I console myself with the thought that at least she chose empowered princesses, lol.

Love the pictures, all of them. And the image of some kid trying to move your 'letters' around...let's say I'm snorting and leave it at that. Less unpleasant for everyone.