Mondays on the Margins: Book Review - Island of Wings by Karin Altenberg 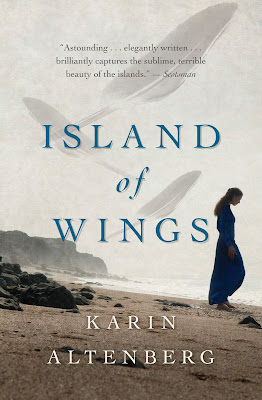 A few weeks ago I found a package of books in the mail from Trish at House of Anansi Press. The note said that the two fall releases were a little off the beaten path, so she thought they might be right up my alley. I sent her an email that read "Dear Trish: how is it we've never met and yet you totally get me?" Then she emailed back and said she reads my blog even when it's NOT about books she's sent me, which might have made me squeal in a most unbecoming fashion.

The quote from Anne Enright on the cover of my ARC of Island of Wings says that this book is written "With scrupulous attention to place, history and the natural world," and "tells a story washed by a clean and lovely kind of sorrow". I both love and hate it when someone else has articulated my own opinion so well BEFORE I'VE EVEN READ the damned book. I also automatically struck it from the list of books I will recommend to Patti and Susan, who often walk around Indigo on dance night picking up books and chucking them aside saying things like "haunting sense of melancholy? I don't THINK so!" and "heart-piercing beauty? Screw that, who wants a pierced heart?"

I found a lot of similarities between Neil McKenzie and Nathan Price from The Poisonwood Bible, which I also loved; both are intelligent, well-meaning, tormented men who I simultaneously wanted to throttle and comfort. The sense of place is vivid, evoking the harsh, spare beauty and the unforgiving nature of the land, from which the native St. Kildans wrest a hand-to-mouth living. Lizzie McKenzie is a more sympathetic character (I'm pretty sure this isn't because I'm a woman, and not in love with organized religion); she is insightful and compassionate, even though her opportunities are extremely limited by her gender and situation.

One of the most frustrating things about McKenzie is that he's NOT an evil man. He's not trying to be an asshole (most of the time) - he really thinks he's right; he's TRYING TO SAVE THEIR SOULS. This blinds him to the fact that in many ways the St. Kildans are already moral and principled people: they look out for each other; they accept no gifts unless they are given to the community as a whole; when Lizzie's twins die and she insists they must be buried in coffins, they muster together enough wood, although it is an extremely scarce commodity and they have all been equally devastated by the death of many infants. All McKenzie can see, however, is their godless paganism, and this makes them inferior in his eyes.

This isn't a book that reaches any grand conclusions. It is a fictionalized treatment of the lives of actual people, based on some documentary sources. It draws brief, vivid sketches of people trying to accomodate themselves to an austere landscape and an unfamiliar people, with varying results. It captures a moment in place and time -- exceedingly well, in my opinion.

-"The archipelago grew out of the low clouds like bad teeth in a weak mouth, the rugged sea cliffs bleakly lit from behind by the sun, which was setting somewhere far out in the west."

-"'You must not ennoble them with more excellent virtues than they deserve, for they are quite crude in many ways... for example, however much effort I put into teaching them the Scriptures, it is as if they will not take them to their hearts. They can repeat the catechism like a child repeats a nursery rhyme, but they do not seem to feel the weight of its truth on their souls. Nor do they let it influence their life and conversation. Indeed' -- the minister was heated now by that missionary zeal -- 'I have heard them swear in the most medieval manner!'"

-"As he continued to look out to sea he was aware that her gentle devotion threatened to embrace him. Despising himself, he felt a need to deflect his sense of failure and shield himself from her love. At that moment he resented her decency as much as his own weakness. 'Our guests did not seem to enjoy their meal very much; perhaps you will be able to improve on the fare tomorrow?' he said, hoping that the cruelty would relieve his frustration and knowing that the hurt it caused could not be repaired."

-"It was no wonder then that the puffins' calls which filled the air sounded so melancholy. 'Oh! Oh! Oh! Oh!' they called mournfully to anyone who was prepared to listen. They looked pitiful and sometimes rather comical, thought Dick, like a great assembly of drunken churchmen swaying back and forth on their webbed red feet, unable to decide where to put their weight. He mentioned this analogy to the minister, who laughed and said that in the current climate within the Church of Scotland the birds may well pass unnoticed."
books 2011

Marilyn (A Lot of Loves) said…
I spent much of Poisonwood Bible wanting to smack that guy upside the head. This guy sounds equally frustrating. However part of my frustration with these characters is usually that no one stands up to them either. I'm...not sure this book is for me right now...but maybe one day when I'm feeling a little more mentally healthy. ;)
October 17, 2011 at 3:47 PM

Nicole said…
ME TOO! I wanted to smack that guy. I may have to reread that book just to get that stabby feeling again.

Mary Lynn said…
Sounds like the kind of book that I would enjoy, but if I suggested it for book club a couple of people would end up wanting to slap me upside the head for suggesting it.

Have you read The Winter Vault by Anne Michaels? That was another beautiful melancholy book. I quite liked it, but it definitely had mixed reviews from friends of mine.
October 19, 2011 at 7:23 AM