Mondays on the Margins: Book Review - Peter Nimble and his Fantastic Eyes by Jonathan Auxier 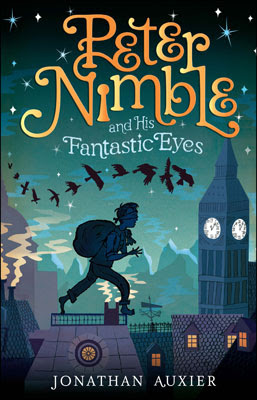 First of all, this book is knock-your-eye-out GORGEOUS. If I'd seen it in the bookstore before Penguin sent it to me I would have been helpless in its thrall. Second of all, it seems that Jonathan Auxier wrote the enchanting story AND drew all the amazing little pictures at the beginning of each chapter, which irritates me in the way that I was irritated when I watched Disney's Aladdin and realized that Robin Williams could also SING. It's kind of like hogging more than your fair share of talent, you know? Anyway...

This is the kind of story I love. Destitute orphan with a mysterious and fascinating destiny involving a quest? Check. Eccentric characters and sophisticated dialogue, wherein people insult each other elaborately and at great length? Check. Impossible-to-believe coincidence following on wildly improbable event? Check.

If I had one quibble with the book, it may be that it seems a little more like a children's book for grownups than a children's book for children, but that might be my underestimating of the average ten-year-old's to read unbothered about a baby's eyes being pecked out by a large raven or... actually, it was mostly the pecked-out eyes that were the sticking point for me, and the empty sockets that Peter would slip the appropriate pair of fantastic eyes into. Once you're past that, everything else is...well, there is some slaughter and bloodshed and what-have-you, but kids are used to that.

I very much enjoyed escaping into this magical adventure. It made me want to hang with a bunch of orphans and overthrow an evil dictator.

-"For a thief, death is something of an occupational hazard."

-"Those of you who are asking the very same question have clearly never been pirates or buccaneers. If you had been, then you would know that lemons and other citrus fruits are used to defend against a nasty disease called 'scurvy.' Scurvy comes from a lack of a magical vitamin that prevents one's teeth from rotting away during ocean voyages, which is why they call it 'Vitamin Sea.'"

-"Some of you may even be thinking to yourselves, 'Boy! I wish I were blind like the great Peter Nimble!' If you are thinking that, stop right now. Because whatever benefits you may believe that blindness carries with it, you must understand that there are just as many disadvantages. For example, if you were to give an order to a bunch of thieving prisoners, and they answered 'of course' while smiling to one another and rubbing their hands, you would see this and know that they were planning something terrible - which was exactly the case here."

-"The princess shrugged. 'You call them the Night Patrol, but for us they are simply monsters. When you have seen enough of your friends eaten whole, you put aside all formalities.'"

Marilyn (A Lot of Loves) said…
Your review made me chuckle out loud. I'm not sure about the eye-pecking thing, but I was reading Stephen King at age ten so if I can handle that, bring on the eye-pecking!
September 20, 2011 at 4:22 PM