Memorable moments from our Summer of Awesome 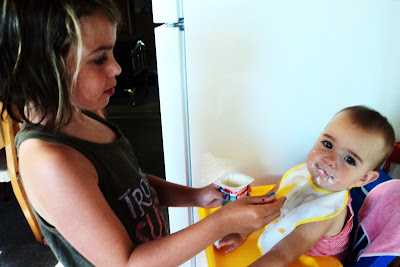 Angus discovers that, no matter how good a pitcher you are, you can't beat a rigged carnival game: 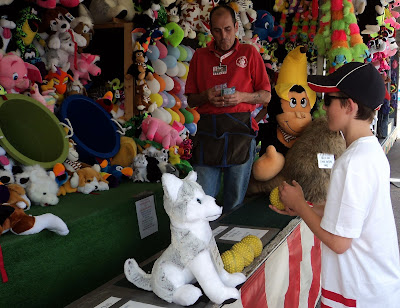 Eve rides a carousel, and halfway through her ride Angus and I realize all the horses on it are really freaking scary. 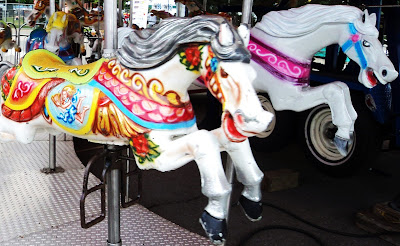 Matt discovers, to his great disgust, that our kids suck at bumper cars: 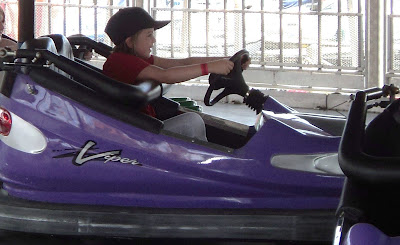 We babysit a bird for five weeks and get quite attached. The little bugger dies two hours before we're due to bring him home. At least his owner (Eve's friend) was already here and had seen him alive so they didn't suspect we'd been keeping him in the freezer or something, but still, it sucked. 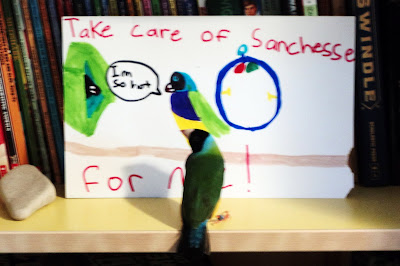 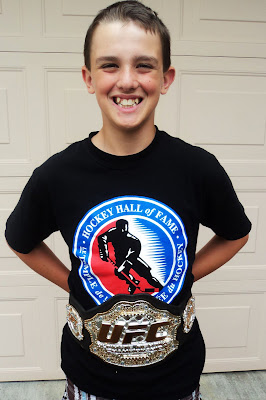 I follow my friend Janis into EQ3 in the market to look at sectionals and stumble upoon the purple rocking chair of awesome that OBVIOUSLY must be obtained for Eve's soon-to-be new room: 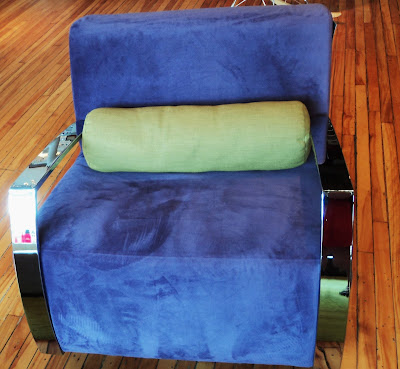 Just FYI, if your herb garden looks like this, it's probably past time to weed: 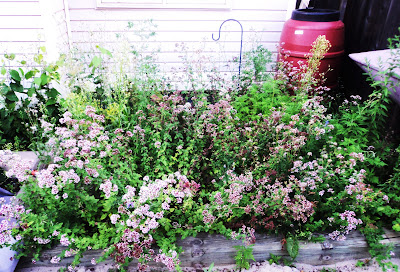 Eve and Marielle take Britannia Beach by storm and I have a huge laugh at Marielle's Mom's expense (that's the bikini she was ONLY allowed to wear on the cruise they're taking next March): 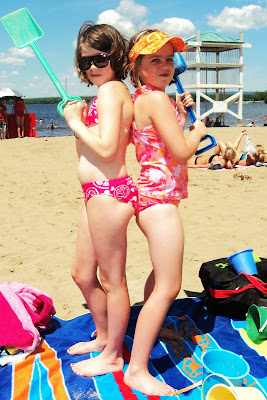 One minute it's all football and sandcastles, the next you're smack in the middle of the Zombie Apocalypse: 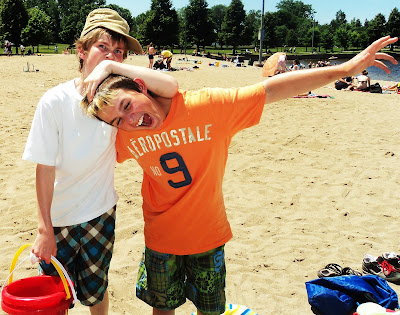 For Swistle: me, practically full-length, wearing the EXACT SAME SHIRT as tiny little Zarah. (Eve demanded it, and since we made the kids wear matching shirts I capitulated) 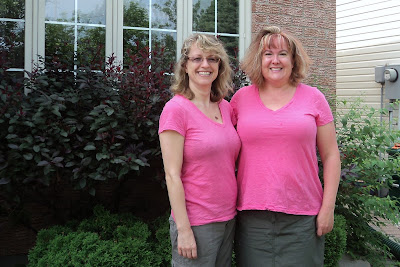 This year the kids (Zarah's and mine) would only agree to pose nicely if we subsequently photographed them beating on each other: 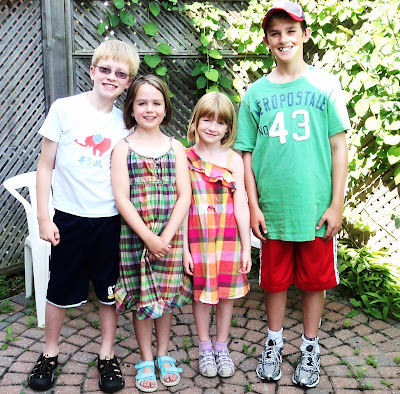 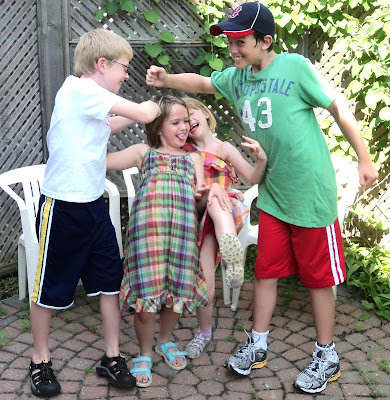 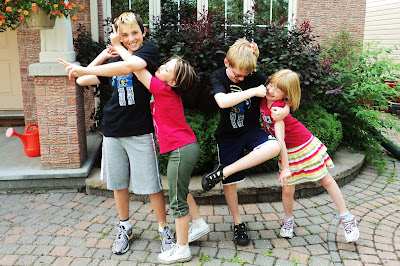 Our enterprising children engage in both theatre and marketing: 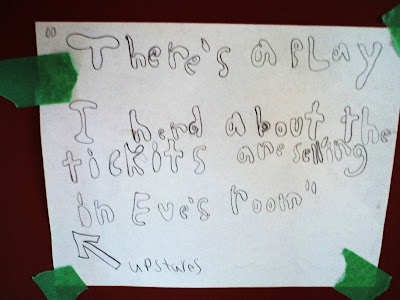 And the cast photo, naturally.... 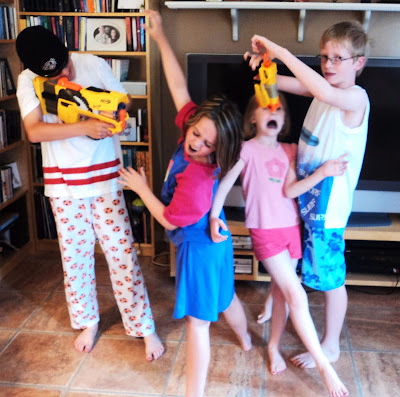 During the Provincials championship game, Angus falters while pitching his fourth of five innings. The first baseman walks out to centre field, punches him lightly on the shoulder, and returns to first base. This makes me cry. 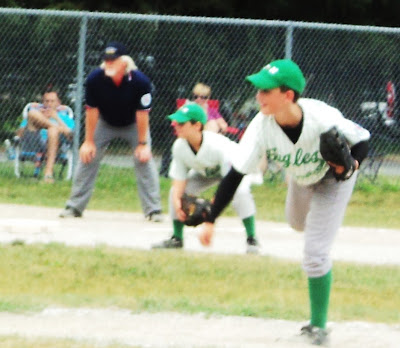 Eve decides to pick a recipe from my Mrs. Fields cookbook for us to cook. We make black and white cupcakes. She doesn't really like them. 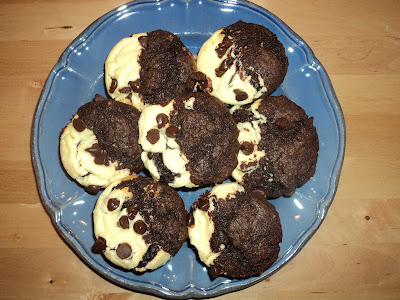 Eve gets over her fear of driving ("WHAT? I can't drive THAT!"): 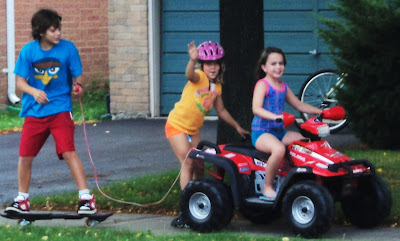 Angus gets off the baseball diamond and onto the beach - somewhat unfortunately for photo ops, his friend Jacob has been there for four days already. 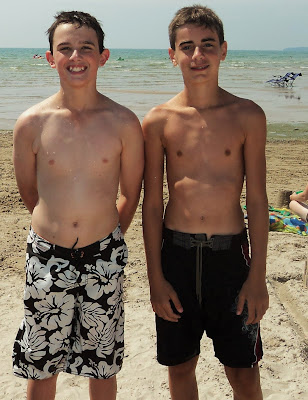 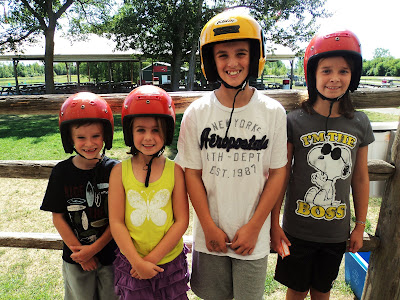 My Mom drives a go-kart. Pretty much worth the price of admission right there, wouldn't you say? 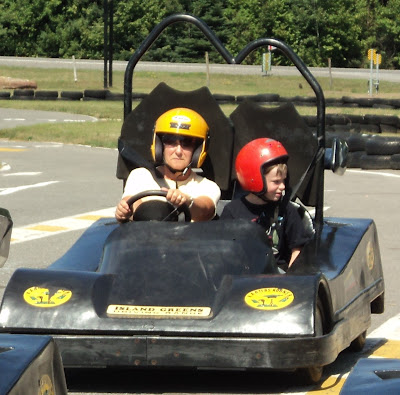 I get my act together in time to participate in one of Amber's monthly round-up posts. Yippee.

Swistle said…
What GREAT photos! I love funny goofy kid shots too! And you look terrific, and that's a great color on you!
September 3, 2011 at 3:45 AM

Bridget said…
These are some great summer photos! I took photos of Kyle's 5th grade class at Christmas and the only way they would pose for a nice picture was if I promised that they could do a goofy picture afterward. Ironically, the goofy picture is now one of my very favorite pictures.
September 3, 2011 at 11:02 AM

Denise Nielsen said…
Ha ha - I didn't even post picture of my garden (um, I mean weed patch) in my summer wrap up - it is that bad!

Great photographs. Hard to believe the summer of awesome is almost over.
September 3, 2011 at 12:24 PM

Nicole said…
That truly is the summer of awesome. Honestly, those rigged carnival games have been the source of much disappointment in our house.

Julie said…
ok, the bird dieing thing? how is that the summer of awesome? that sucks!!

looks like it was a great summer of awesome. i think the herb garden looks gorgeous.
September 4, 2011 at 5:30 AM

Lynn said…
Fantastic summary, and your summer looks so amazing! I am so sorry to hear about Sanchez, though. I met him for like, an hour, and already loved him. Hope the kids are okay.
September 4, 2011 at 5:58 AM

Ms. G said…
I don't even know where to begin. Summer of Awesome without any doubt! Except for the bird thing of course. Your mom is obviously as awesome as the rest of the family, I Love That Picture: )
Oh, and I will have to tell my youngest that if she wants a UFC belt she's in the wrong sport ; )
September 4, 2011 at 7:29 AM

Pam said…
I am finally getting caught up and your summer, well, looks AWESOME. That purple chair really ROCKS.
Cheers!
September 5, 2011 at 10:39 AM

Alicia@ eco friendly homemaking said…
Oh I agree what great photos. It looks like you all have had such a great Summer!!
September 5, 2011 at 7:08 PM

Amber said…
Love all the photos! And that one about Eve feeding a baby and getting annoyed, that makes me laugh. Nothing like an older child having a sudden realization that they too did the same things. Although I don't think appreciation for YOU will kick in until she has her own kids.
September 5, 2011 at 9:35 PM

Marilyn (A Lot of Loves) said…
My herb garden did/does look like that! So you're saying I should weed once in awhile? :)

When a bird dies, do they just keel over right then? No sickness or anything? Plop, the end? That's kind of dramatic and sucky.
September 6, 2011 at 8:14 AM

My favourite is Angus' big grin in the big belt.

Magpie said…
Yes, your mother driving the go-kart was totally worth the price of admission.
September 7, 2011 at 8:34 AM

Finola said…
It looks like you definitely had an awesome, and VERY happy summer.
September 7, 2011 at 4:55 PM

Anonymous said…
Love the photo montage. I giggled at the bird one. Does that make me a bad person.
September 8, 2011 at 8:55 AM

Krista said…
What a fabulous august it was. I want to be part of your family next summer of awesome!
September 13, 2011 at 4:51 PM