He Who Rejects Change is the Architect of Decay

September 08, 2011
Then BRING ON THE DECAY, I say. I don't do well with change (I may have mentioned this before). It doesn't matter if the change is mighty or miniscule, positive or pissy, it stresses me the fuck out. Not intellectually - I look forward to the changing of the seasons; I like the freedom that summer holidays bring; I also like getting back into the routine of school, piano lessons, me and the kids reading in my room at night before bed. I like the satisfaction of finishing one course and the challenge of starting a new one.

But something in my body there is that does not love change (I was trying to do a takeoff on that line of poetry about something in nature not loving a wall, but I just ended up sounding like Yoda. Fuck.) The kids get out of school and I'm a panicky ball of angst. The kids go back to school and I'm a weepy mess. I got new glasses a couple of years ago and I actually wrote in my diary "I hate how they feel when I'm washing them. The lenses used to feel curvy and welcoming and now they feel flat and unfamiliar in my hands." (yes yes, I'm even a teeny bit MORE insane than you suspected, take a moment to process and let's move on). My hair dryer finally died a few weeks ago and I HATE the new one, almost solely because it's new.

So I'm focusing my negative energy on clearing the crap out of my house. Again. Because apparently there is an invisible Crap Factory somewhere in my house that keeps churning out more crap to replace every bit of crap I get rid of. Pam and I dropped five garbage bags and multiple boxes of stuff at Value Village today. Then we went shopping. Oops.

I also kind of want to start doing a regular book review day here, but I'm hobbled by the fact that none of the days of the week has a first letter that is amenable to alliteration with 'book' or 'review'. I mean 'Wordless Wednesdays' is a no-brainer and Amber used to have her 'Mat leave Mondays', there was a Friday Funny for a while...I just don't know if I can properly do a regular feature that doesn't have a catchy title -- is that even allowed in blogging?

Now I will distract you from my whining with multiple cute pictures of my daughter with her home-improved backpack and on the first day of school - and the one or two pictures Angus would consent to pose for. 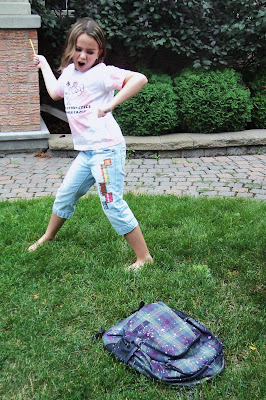 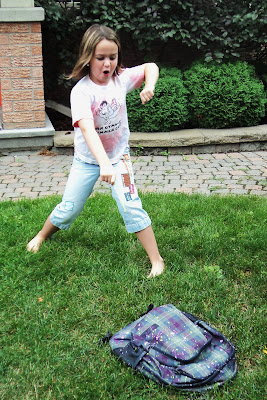 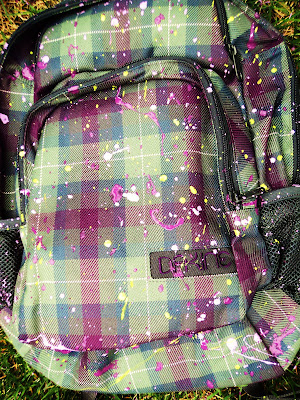 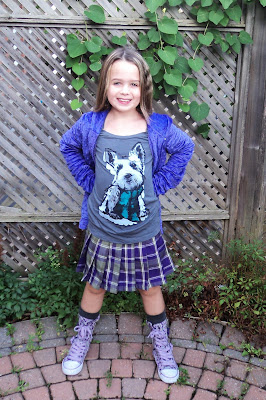 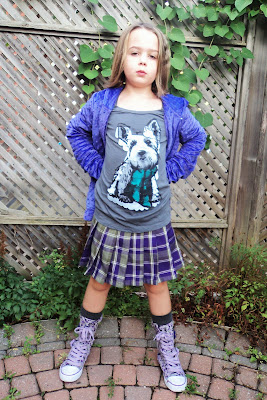 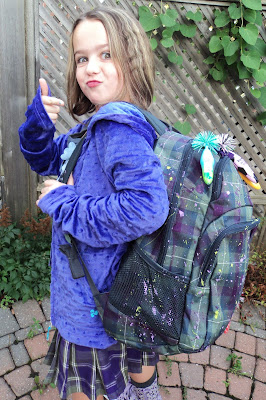 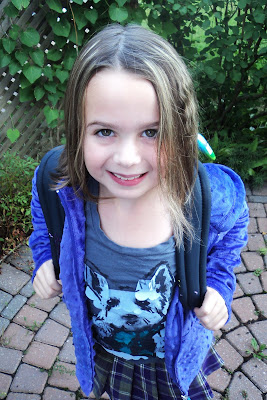 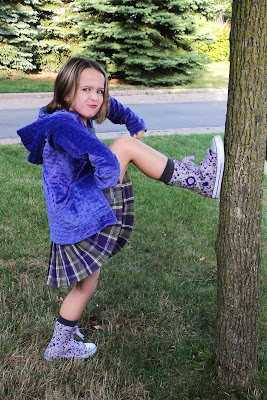 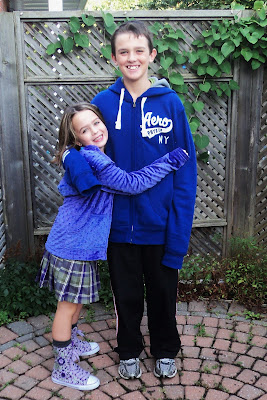 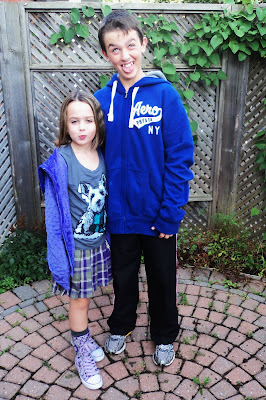 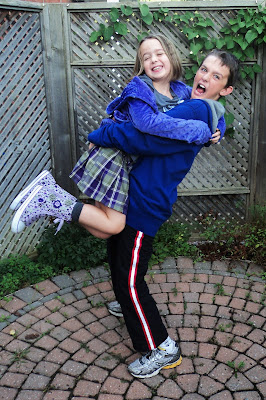 Nicole said…
I love Eve's outfit. I kind of want one myself. So cute. How about Book Review Monday? And who cares about alliteration anyway?
September 8, 2011 at 5:36 PM

Anonymous said…
First of all Eve is kick ass, second of all I am up to my balls (eyeballs) in September craziness but, you? You make my tired ass smile (asses smiling always cheers me up) and finally, This Book Thursdays (duh).
September 8, 2011 at 5:43 PM

Bridget said…
I so love these pictures of the kids!! Love how Eve glammed up the backpack. And boys and their aversion to pictures...it must be the Y chromosome...
September 8, 2011 at 7:43 PM

Rosemary said…
We saw those boots Eve has on at the Children's Place. Holly looked at me with eyes like saucers and a huge smile. I knew I was not getting out of the store without a pair. Hers are pink and she wore them on the first day too :)
September 9, 2011 at 3:45 AM

Julie said…
first: do those high tops come in adult sizes? i could totally rock those!

I was going to suggest Fiction Friday, if you're going to be sticking to fiction for the most part.

And are those tie-up shoes on Eve? Are these her first with laces? We are having tie-up shoe torture over here (torture for them and for me).
September 9, 2011 at 5:59 AM

Suniverse said…
The fact that you wrote in your diary about washing your glasses makes me love you so hard right now.

Ms. G said…
Where did you find Eve's shoes?! Do they come in teenager size because I know some young ladies who would agree to never buy anything else to get them!

Allowed in blogging? That's the best reason to make your own rule!
Rebel! And check under the stairs for that Crap Factory. I think that's where mine is.
September 10, 2011 at 6:23 AM

Amber Strocel said…
Eve just may be the coolest kid EVER.

Also, I currently do Crafting my Life on Thursdays, and there's no alliteration there whatsoever. So do what you will, I say!
September 14, 2011 at 10:51 PM