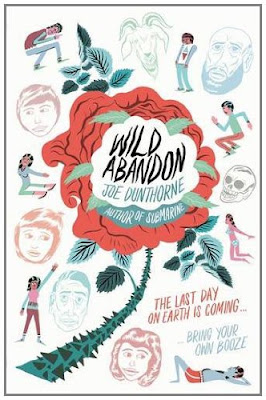 "The last day on earth is coming. Bring your own booze." (you know it's going to be a good book when....)

I had trouble pinning down exactly what I loved so much about this book. Once given the premise of a 'secluded communal farm disintegrating' and the cast of characters - the teenage daughter chafing against the hippie constraints of her parents' philosophy, her younger brother who just wants the family to stay together, their struggling parents and the various other eccentric residents of the farm, it's not hard to guess where the action is leading, and it's only the details that need to be filled in. The details, however, are superb - we see how the seeds of the 'Community' were planted (college graduate friends and lovers living in subdivided office space), the long arc to the place the characters now find themselves in, and the ways in which they all cope with their various disappointments.

Kate, the 17-year-old daughter, is an interesting, if not likeable, character. Her situation reminded me a little of Nomi Nickel in A Complicated Kindness by Miriam Toews, where we come upon a character who belongs to a certain faction when that faction has already eroded so much as to be unrecognizable; part of me wished to see more of when the Community had been whole and functional, and yet there is a certain giddy freedom and potential in witnessing the end times. Kate is perhaps as lost as Noni, but her casting about for a new normal seems much more selfish and calculating - she throws over homeschooling to attend a real college, meets a boy, moves in with his family who welcome her warmly, and then sets about seducing his father. Albert, her 11-year-old brother, is the most tragic figure - trying desperately to hold his fragmenting family together until the impending apocalypse in which he profoundly believes. Don, the commune's patriarch, and Patrick, the commune's main financial benefactor (a former greeting-card franchise regional manager), come across like middle aged Welsh frenemies, unable to express anything without a one-upping subtext, even though they do have genuine affection for each other. And Freya, Don's wife, is worried about her son and wants a break from her husband. Patrick's unrequited love for Janet, another member of the commune, is another sore point, as is the doomsaying of Marina, mother of the Community's only other child, a further sign of its depletion. Freya is considering sending Albert to school, while Don is determined to keep him sheltered from the evils of the outside world. Events and personalities devolve, culminating in a huge rave party at the commune, Don's desperate bid both to engage the surrounding community and draw back together the members of the commune.

There is both humour and pathos here, since the characters are so real, and for the most part so earnest. I want to believe that cooperative communal living off the grid is possible, and yet I know I would be one of those people pulling out the "contraband shampoo" when the homemade egg yolk and oatmeal shampoo didn't produce any lather. The problem with such an idealized mode of existence is that humans aren't ideal, which is precisely what Dunthorne shows us, with a light and affectionate touch.

-"(Albert), through years of collecting words from international visitors to the community, had compiled an armoury of exotic insults. He tutted and proceeded to call her something bad in Bengali. She tried not to react."

-"With classes of nearly a dozen young people of all different ages, subject matter had been pitched to the cleverest person, but with simpler alternatives. Their education had peaked with Arlo's now infamous class on cinquecento Italian architecture, which involved a high-level discussion of the villas of Palladio alongside an ambitious attempt to build 'La Rotonda' from Lego."

-...according to Patrick's pet theory -- Don only became condescending when something bad was happening in his personal life. Patrick had noted that, during times of marital strain, Don would aggressively encourage individuals to streamline their recycling process, for example."