August 03, 2011
We have a dinner party with four other couples every couple of months, where everybody makes something fancy-ish, and we rotate who does the soup, salad, appetizers, main course and dessert. It's been a big success; I really enjoy the fact that everyone only does one course -- usually I wouldn't spend all day making a salad, but when I actually have the chance to it's quite satisfying. Over the past year we've had Julia Child's boeuf bourguignon, veal osso bucco, spit-roasted lamb and satsivi (a Georgian dish consisting of chicken bathed in walnut sauce); pear parsnip soup, smoked salmon chowder and lobster bisque; butternut squash ravioli, cauliflower fritters, seared duck and scallops on pesto. And that's just what I can remember. People have cured their own pork belly, aged their own steak and beheaded chickens in the back yard (I might be exaggerating on that last one).

For this party I was making grilled strawberry and fig salad. 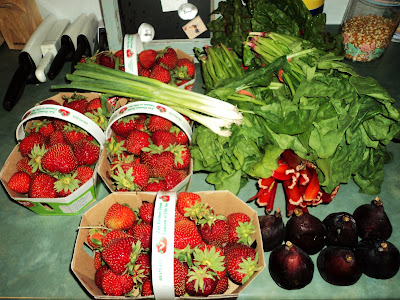 I'd actually never eaten a fresh fig before -- I had to call one of my friends to ask if I was supposed to peel them. I bought an extra one to try eating and it took me a few minutes to bite into it, it looked so strange, but it was delicious - Eve liked it too. 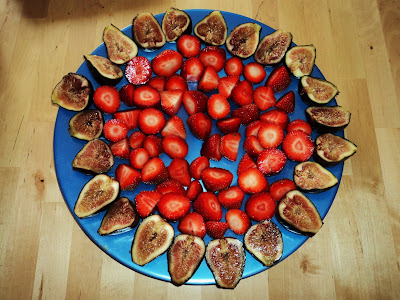 I couldn't find pomegranate molasses, so I made some, which was easy. I used snow pea shoots instead of sunflower, and I have no idea what Hooks blue cheese is and no memory of what kind I used.

We grilled the fruit and got all the ingredients ready here, then assembled at the host's house. 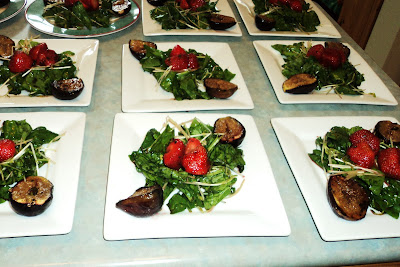 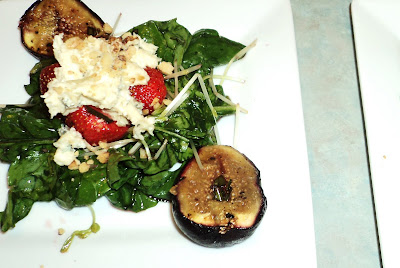 Just as I was sprinkling the last spoonful of walnuts on the last plate, I remembered that Susanne's boyfriend Paul is allergic to shellfish and....OH FUCK. Considering I was the one who made the chicken in walnut sauce and that I made a separate chicken breast with a balsamic reduction for him, you'd think I might have remembered. In my defense, he is very quiet - in our blind guess-the-food game, he ate nectarine and it was Susanne who spoke up and said he was allergic to nectarine peel. I cleaned off the plate and made a new salad without walnuts and apologized to Susanne for trying to kill the father of her unborn child. Margot quietly occupied herself with removing the walnuts from the green beans for the main course plate. Later on someone asked Paul how he found out he was allergic to walnuts and he said 'eating walnuts'. See? He's gotta get more obnoxious, or he's not going to survive this group.

The salad was great, although the tradition is for everyone to praise everyone else's dish and denigrate their own, so I probably said I should have used arugula instead of swiss chard or something, for form's sake. Curiously, a good part of the conversation tonight revolved around things happening to people's fingers (if you recall, the conversation was toe-centered at my book club meeting). Also, the drunk woman beside my husband kept threatening alternately to stab him or perform oral sex on him (apparently she'd lost the distinction between fellate and fillet several drinks earlier). Somewhat inexplicably, a good part of the night was devoted to a discussion about Rick Springfield and Simon in the Land of Chalk Drawings. However, no boyfriends were harmed (or molested) in the course of this dinner.

For those who asked, here is my book club list for next year:

The Book of Negroes, Lawrence Hill

You Could Live a Long Time: Are You Ready?, Lyndsay Green

The Death of Grass, John Christopher

The other two months are a short story night and a manuscript by one of our members.
books 2011 confessions of an indiscriminate reader favourites food glorious food summer of awesome

Julie said…
now i'm intimidated not only by your book club but by your dinner club too!

Nicole said…
I want to eat that salad. Holy crap does that look delicious.

Now I'm hungry AND humming "Man I wish I had JESSE'S GIRL. Why can't I find a woman like that? I play along with the charade. There ain't no reason to change. You know I feel so dirty when they start talking cute, I wanna tell her that I love her but the point is probably moot. Cause she's watching him with those eyes! And she's loving him with that body I JUST KNOW IT. And he's holding her in his arms late at night...oh man I wish I had JESSE'S GIRL."

Ms. G said…
hee hee, I'm humming 'well you know my name is Simon....'Would you believe I spent a long period of time a few weeks ago trying to remember if Captain Kangaroo was the show that featured it when I was a kid or if it was another show? Then again, maybe you would believe it. I haven't heard anyone else mention it in years. I finally remembered I had the internet and it was The Captain : )
August 4, 2011 at 4:15 PM

Wrath Of Mom said…
Fellate vs. fillet -- better she get the words wrong and not the action.

Mary Lynn said…
Wow, that salad looks yummy. I've read Book of Negroes and Come Thou Tortoise. Soon reading Best Laid Plans, as my book club is doing it this month. Let us know if any of the other ones are good!
August 4, 2011 at 8:23 PM

Finola said…
You lost me at: "I couldn't find pomegranate molasses, so I made some, which was easy." And here I thought I was being a domestic goddess today for boiling some fresh tortellini from the pasta shop and cutting up strawberries for the kids.

Kelly Miller said…
Have I mentioned lately that I want to be your real-life friend? Maybe your neighbor even?
August 10, 2011 at 10:00 PM