Here's the thing - when you're living the Summer of Awesome, it's really hard to find the time and energy to blog about it, yanno?

Let's start at the end of June. My annual end-of-the-year dinner with my book club, wherein we eat, drink and compose the list for the coming year. People bring suggestions (one for the exceptionally self-confident, five for members like me - "only if nobody minds....don't want to force this on you....I thought maybe, possibly, if it's okay with everyone.... blah, I sometimes make myself vomit).

We sometimes meet at a restaurant, sometimes at someone's house. We met at Bella's twice - the food was good, but people complained that we were noisy -- which we were, but geez, it's a restaurant, not a church. And Survivor - Book Edition cannot be played quietly. We met at Biagio's but.... I can't remember what the but was. I think some people thought it was too expensive; I will say it's the only place I've ever liked the calamari. We met at The Cottage and a Kitchen for a few years, which was great, but the best place to eat was the patio and the group was always divided on whether or not patio dining was desirable. We thought we'd try something new this year, so we went to The Foolish Chicken on Holland, and dude, we always have to go there now, because almost everybody orders some form of chicken and ribs and the repetition of the term 'rack' (half-rack, quarter rack) is grounds for endless hilarity. Also, the ribs are really good. And the waitresses are sweet. And hot. And everybody upstairs was noisy, and we helped sing Happy Birthday to some guy in French.

Our meeting was the Friday in June when the heavens opened up and rained fury and wrath and a buttload of water down on Barrhaven and the surrounding area. We were dropping the kids off at my Mom and Dad's so my husband could drop me off at the restaurant so I could imbibe to my heart's content and then hitchhike home or something. It was like driving in Venice - there was water fanning up to the height of the car roof on either side. Angus said "is there a plan for evacuating the city?" I was a little annoyed - I know I don't go out on Friday nights that often, but I didn't think apocalyptic rainfall was called for.

My friend Carolyn has this wonderful curly red hair, which has been short for as long as I've known her, until the past year when she started growing it. When she walked in the restaurant it looked like this: 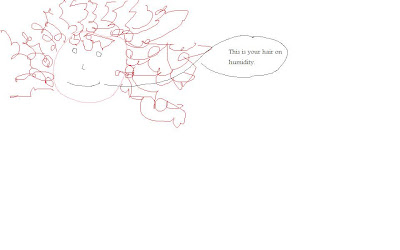 I tried to get The Razor's Edge on the list after rereading it recently, so we could discuss my crazy Irish former boss's opinion that it was the Best Book Ever Written, and also whether Somerset Maugham didn't seem to like women much more than Jonathan Franzen or if it was just me (me that got the feeling they didn't like women, not me they didn't like - I doubt that either of them has any opinion in particular about me, although in the unfortunate and extremely unlikely eventuality that they read this, that might change). Anyway, they didn't go for it. Which is okay, because I also want as many people as possible to be exposed to the glory that is Come, Thou Tortoise.

After dinner we went to The Royal Oak for a few beers. Okay, Carolyn actually ordered a decaf Irish coffee, whereupon we mocked her for the lamest drink order ever. The night was also marked by various assorted horrific and grotesque stories involving toes, but I think it's best if I don't go into that.

By the time I got home, it had stopped raining and the streets were passable. And very clean.
books 2011 confessions of an indiscriminate reader summer of awesome

And Ack! I still haven't read Come Thou Tortoise yet! Mainly because I keep asking my daughters to look for it when they go to the bookstore or library instead of going myself or buying online. That's what I get for being lazy.
August 3, 2011 at 5:33 AM

Lynn said…
How do you pick the books? I want Survivor-style details. Do you lay them all out, then give everyone a voting sheet? Do you just chat about it and come to a consensus? Is everyone allowed to pick one book, and everyone else just has to suck it up and read it?