Baseball Team of Awesome OR My Son is on the A-Team!

August 15, 2011
In our league, spring ball and summer ball are separate. Eve only plays spring ball, because the glory of adulation of usually being the only girl on the team (man, the Moms who only have boys LOVE her) only goes so far. In the spring all the players are sorted out equally onto teams. In the summer, there's a competitive team that you have to try out for - they call it the A team. I remember when my husband first mentioned the existence of this team. He said they practiced almost every day, sometimes twice a day, and I was rolling my eyes saying "Cripes, that would be the only thing you did all summer. Can you believe people actually do that? Can you....holy crap, you actually want him to do that, don't you?"

The first year that Angus was in Minor, he was 'playing up', i.e. playing in Minor when he was still technically supposed to be in Rookie, but his birthday was close enough to the cut-off and he was a good enough player that they let him in. We had decided that he wouldn't try out for the A team that year; we were going to go on a two-week vacation out east with three other families, in preparation for possibly not being able to take vacations in the summer once he was playing on the competitive team. He got invited to try out for the competitive team. My husband was in Japan and I told him this on the phone, and then I said 'they're supposed to show up at 11 to try out for the A team and 1 to sort out for the regular team. I'm taking him at 1." My husband agreed - because he was in freaking Japan, what were his options? Then the damned coaches let him try out at one for the A team anyway. Fortunately (depending on who you ask) he narrowly missed being selected for the team.

Last year he did make the team. There weren't many returning players because many of them had moved up to Major, and the pool of kids who tried out wasn't as big as it sometimes is, so they had to take some weaker players. It was a good team, but not a fantastic team.

This year? They're freaking unbelievable to watch. Angus is a good pitcher, and a good batter, but last year there were times when he almost had to carry the team, and in a playoff game if he struck out or faltered, the whole team seemed to freak out and lose it. This year if he throws a bad pitch or fumbles a ball, the rest of the team backs him up like a well-oiled machine. They were undefeated in regular league play going into the District tournament. They won the District tournament, which meant they played teams from all over Ontario in the Provincials. One day we opened the paper and saw this: 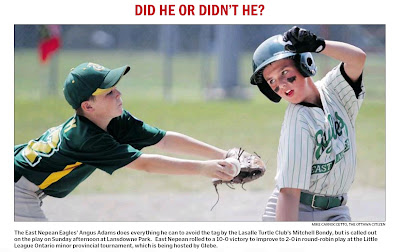 (That's my kid on the right). That was kind of neat. The coach saved Angus as a pitcher for the final game. He pitched five innings and they won 7-0. The next day this was in the paper:

Except in the actual paper, not only is most of the article about him, the HEADLINE reads: ADAMS DOES IT JUST LIKE DOC.

It's still pretty cool though. For the entire Provincials tournament, they scored 64 runs and only had 2 scored against them. The day after we won, the parents who had the party sent out an email with a picture of a pile of beer cans saying "We actually managed to drink more beers than the team scored runs".

I love it when a plan comes together.
baseball Laird Angus McAngus summer of awesome

clara said…
Your kid is harcore! And also do you have the A-Team theme music in your head all the time? Because I think I will for possibly days, now.
August 16, 2011 at 1:48 PM