August 31, 2011
The weather here this summer has been fabulous (if you like weather of the scorching melting hot variety, which I actually don't, but I also don't love everyone moaning and wailing when they don't get it, so on balance....). However, it has also had a nasty habit of sensing when I'm planning to do something fun and unusual with the kids that we've never done before and dumping a bucket of crap on those plans. So we didn't get to Puppets Up in Almonte, or Saunders Farm (I know, I'm possibly the last person in Ottawa who hasn't been to Saunders Farm). Of course, the kids are usually already pumped up about doing something, because I'm - what's the word? - a moron, so we have to do SOMETHING, but it's raining, so the something almost invariably ends up being a movie. And kids movies this summer? SUCKED SUPER HARD. The Smurfs? Jayma Mays and the awesomeness that is Neil Patrick Harris, and Hank Azaria, plus little blue people? Actually it demonstrates a sort of impressive savant-like level of excelling at being lame to screw that up. Spy Kids 4? I was cautioning my daughter that we might have to go to some special theatre - IMAX or something- to get the SmelloVision, since I thought they'd be blowing bacon-flavoured mist out of the vents or something. Nope - just a darling little scratch-and-sniff card, with eight numbers on it that, when scratched, all smelled pretty much exactly the same. Ditto with the writing and acting.

So when we woke up on the day we were going to the Laflèche caves and it was threatening rain I said FUCK IT - we're still going (in my head, of course - I hardly ever say 'fuck' in front of my kids, and the one time I did Eve tolds me consolingly that we'd just pretend I was saying 'seal' in French). 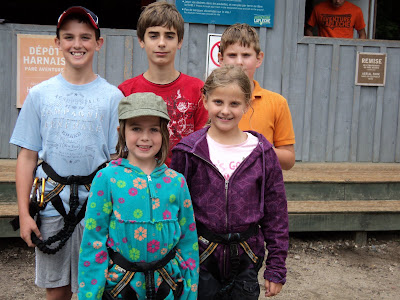 So they harness you in and you inch across ropes and ride on wooden swings and crawl through MOVING WOODEN TUNNELS, none more than 4 metres above the ground (which is really not that close to the ground when you're up there, trust me). 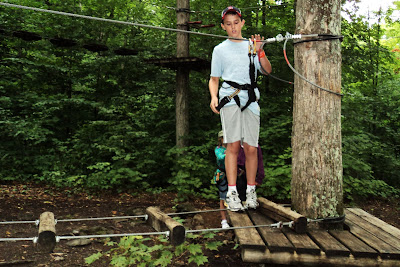 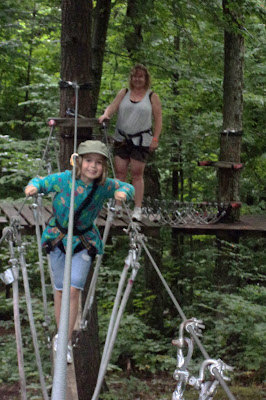 Both segments of the course end with a baby zipline ride. This was probably the thing that freaked me out the most and then surprised me with how much I liked it - once I committed myself to lurching off the platform in a most undignified manner, it was surprisingly comfortable and exhilarating. Until I crashed into the rocks. 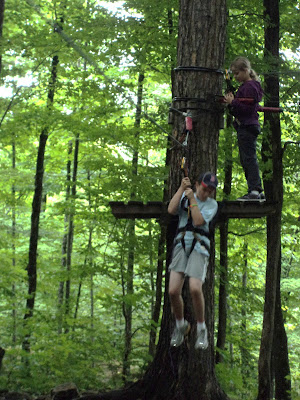 (Picture of me? Yeah right).

As we were walking back down the path talking about how much fun the course was, Janet said "actually I'm a little surprised you did it all -- don't you have a phobia about this kind of thing?" I said "oh, I'm totally soaked in fear sweat right now, but you have to challenge yourself every now and then". Then I asked her to hold my hand in case my wobbly knees refused to carry me any further. Angus is keen to do the adult course, which is three and a half hours long with much longer and higher ziplines. I told him I have to train for six months and undergo extensive counselling first.

We had a picnic on the tables by the pond, where we could watch people sail overhead on the Adventure Course ziplines. The girls chanted DROP YOUR SHOE! DROP YOUR SHOE! every time - curiously, no one did.

Then we went on the cave tour. I thought this was going to be the easy part, and then I remembered how I'm mildly claustrophobic. It's kind of annoying the things I've scaled and squished through and the water slides I've gone down headfirst, all in the name of showing my kids that sometimes you have to feel the fear and do it anyway. It's not totally fair that they have to do it anyway without the promise of tequila afterwards, but still...

The caves are really cool. Well, all caves are, aren't they? It's a big mountain that you can walk inside - that's cool. Plus we got to wear headlamps! 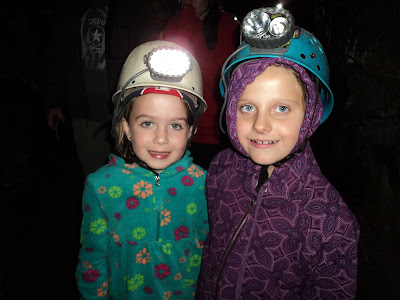 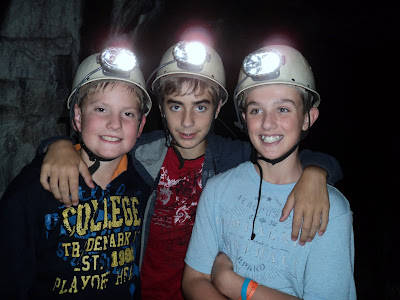 We also had to climb up a small, clammy, endless ladder at one point, but let's not dwell on that. 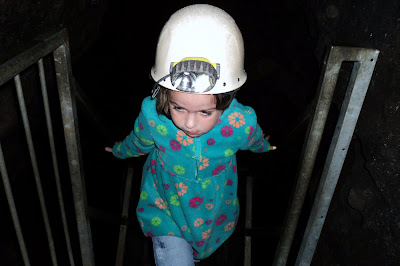 There was one tiny tunnel we were supposed to crawl through. I was about to clamp down my burgeoning hysteria and proceed, and then I thought, wait, surely not everyone who does the tour would consent to this insanity. So I went around. 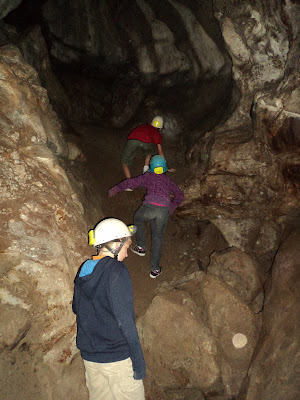 When we were doing the course, the rain couldn't even reach us through the trees. The minute we got out of the caves the skies opened up and we were drenched by the time we got back to the van. It was still a great day - with no little blue men, crass product placements or baby poop sight gags, just good, outdoor, mild-panic-attack-inducing fun.
happy days summer of awesome

Mary Lynn said…
I am super impressed that you did that zip line. I honestly don't know if I could, though it is surprising what I can manage to do when I know the kids are watching me. Damn this whole "being a positive roll model" thing. It really does cramp my style.

Patti said…
Woohoo! Way to go Alli. I'm so proud of you.

What a fun account of the day too. We've never been to the caves (I don't want to write the name of the caves because I'm too lazy to figure out the accent circumflex thing and too lazy to copy and paste the title and then edit it down).

Marilyn (A Lot of Loves) said…
As I get older my claustrophobia is becoming more pronounced. I crawled through a cave once when I was 18 and managed not to scream or cry once. Reading that you might have to crawl through a hole in your post made me start to weep...inside. I would have gone around too. The outside bit sounds fun, in a scary sort of way.
August 31, 2011 at 1:57 PM

Wrath Of Mom said…
I would do the ziplines one thousand times, rather than do the cave ONCE.

Bridget said…
So proud of you for conquering your fear and having fun! It sounds like it would be a blast. I'm glad you and the kids went even with the weather. I so hate it when I make plans and the weather pisses all over them.
August 31, 2011 at 5:08 PM

Lynn said…
Oh wow, how do I put little hearts in my comments like Mary Mur?

I have no fear of ziplines and mild fear of caves. But I DO have a strong, irrational fear of traveling to Quebec. I am always convinced that we will be thrown in jail for a minor traffic violation and never see our home again.

Still, adding this one to the Summer of Awesome list for years future. Possibly way in the future, with me in some sort of drug-induced haze.

Julie said…
well you're the last person in ottawa to not go to saunder;s farm now, because we finally went today. totally awesome.

i did the adult course several years ago. crazy awesome but crazy hard. i couldn't walk for days. never did the caves though. they freak me out.

Gwen said…
Wow! Ziplines and caves makes Saunder's Farm (which I've NEVER been to, despite living my entire life in Ottawa) sound like a wonderful rainy day activity. You are a braver person than I am!!!
September 2, 2011 at 6:02 AM

clara said…
Yikes! Good on ya. I think I'd be okay with the zipline but the small, clammy spaces...eeek.

Krista said…
I went there this year for a friend's bachlorette. It POURED rain the entire time we were there, and that adult course is really hard! That being said, it really is fun and quite beautiful. :) we didn't get to the caves, which suited me just fine...