August 08, 2010
This past long week-end, Eve and I did not go camping. By which I mean we went, sort of, not-camping. By which I mean the three other families we travelled to the east coast with last summer made reservations ages ago to go camping at Sandbanks Provincial Park for a week including the long week-end and asked us if we wanted to go to make it a WAWA reunion (our four last names). Whereupon I laughed until I fell over and bumped my elbow and said 'ow', then sat up and said 'oh, pardon me, you were serious?', then said 'yeah, sorry, I don't camp. If there's a nuclear holocaust that results in the complete destruction of civilization and we all have to take to the forest and forage for food and dig toilet pits and make paper out of tree bark and crap like that, then maybe I will consider camping, as a possible alternative to death. Maybe.'

But in keeping with our 'two single-parents in the same household' summer (see: goddamned baseball) I thought a girls' road trip was in order. So we did go to Sandbanks. During the day. At night we retreated, sunburned and sandy, to a hotel room in Belleville. I'm not saying this is the most genius idea in the history of ideas, but I'm pretty sure it comes close. Of course, I felt like somewhat less of a genius when I punched the address of the hotel into my GPS the first night and got there to find a big empty parking lot, but switching Front Street North to North Front Street fortunately remedied that.

So we showed up with a van full of haphazardly thrown-together clothing and a cooler full of nitrate-laden food because we were NOT going to buy more than one bag of ice (actually I didn't buy any ice -- I threw in some frozen juice boxes). Everybody generously let us use their dinner tents, coleman stoves and firepits, and let us park in their campsites even though it was illegal. Does this mean we stole camping? I like to think it does. 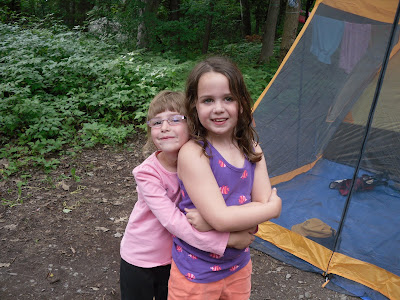 The kids had a blast. You know that law where pedophiles and dangerous people evaporate upon entering a provincial park, so you can let your kids run freely between campsites and bathrooms without fear? (shut up, it is so a law). They played tag and ran around waving sticks and collected bugs. Which was good, because it left us free to play bananagrams for hours at a time (I couldn't stop playing even though I sucked at it -- I was really good at telling other people whether their words were spelled correctly or not, which then helped them hand me my ass -- I'm just nice that way).

The beach the second day was scorching. Searing. Sizzling, torrid, tropical. There was actual damage of burning your feet walking across the sand to the water. Some obnoxious older people set up their chairs actually blocking the path from the parking lot to the beach because that was the only place left with chairs, and I was kind of jealous that I wasn't obnoxious enough to do it first. It was the kind of day where you feel you have well and truly Been to the Beach. 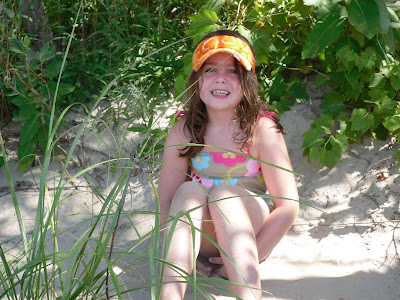 The nostalgia level was high. From when I was about five until when I left home, my sister and I spent many summers in provincial parks with my parents. Sleeping in the trailor with rain pounding on the metal rool. My little sister eating cold bakes potatoes in her bunk bed in the morning. My Dad playing the banjo around the campfire. Drifting off to sleep hearing my parents' muffled voices outside. The oh-so-ironically named 'comfort station'. At one point last week-end I was walking from one campsite to another (they were all a little ways apart), in the afternoon, and the air was the ideal temperature, and the light falling through the trees onto the road was so beautiful; it was the perfect distillation of all the best of those memories, with the bonus that I didn't have to stress about how I was going to sneak out and meet my junior ranger boyfriend later that night. 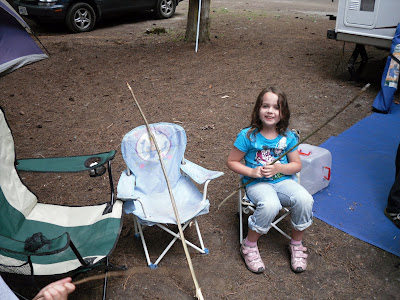 Anonymous said…
We have done this before. My in-laws love to do this camping-as-family-reunion thing. My husband and I get a room at a local motel, and hang out during the day.

Let me tell you, that one time they all had to flee during a horrible storm in the middle of the night, confirmed for me how Genius this really is.
August 8, 2010 at 8:58 PM

Anonymous said…
It sounds lovely! Camping and then staying in a hotel, genius! I have a shy bowel and need an actual single bathroom with walls, not stalls. So now you know.
August 9, 2010 at 5:12 AM

Patti Murphy said…
I like how you stole camping. Excellent. I'm thinking hotel rooms in Mattawa next year. Thanks for the inspiring post.
August 9, 2010 at 7:10 AM

Lynn said…
Oh, how I do so hate camping. Your solution is something I *might* try, someday, but frankly, having spent all day outside and eating outside (EW EW EW) and getting dirt everywhere is close enough to actual camping for me to run away screaming.

Betsy B. Honest said…
I used to love camping. But I put a stop to it when I turned thirty and began using my body to grow people in. Now I'm all for daytrips that involve nitrate-laden food but I will never ever ever inflate another thermarest as long as I live.
August 9, 2010 at 10:21 AM

Betsy B. Honest said…
"Does that mean I stole camping? I like to think so..."

Amber said…
You are hilarious. And yes, genius for sneaking away to a hotel at night. What luxury actually, that sounds like a perfect combo of "camping/not camping".
August 9, 2010 at 10:09 PM

SuziCate said…
Many pros and cons to actually camping out all night long and day, especially on a sandy beach. "Does this mean we stole camping? I like to think it does." - Love it! Glad it was a fun time and brought back wonderful memories. Think of the memories you were making for Eve!
August 10, 2010 at 8:06 AM

Kitty Deschanel said…
Looks like a fun time, you camping stealer, you!
This actually reminds me of a funny part in the book I'm reading, The Slippery Year. You might enjoy it :)
August 11, 2010 at 6:43 AM

Kelly Miller said…
Looks like a lot of fun! My kids love camping and were supposed to go this weekend, but plans fell through. Notably absent from camping? Me. I stay home and use up 3x the electricity I normally would (just bc I can)!
August 11, 2010 at 9:21 PM