November 24, 2009
February. February can't possibly suck as much as November. I've been trying to drag my ass out to the gym all morning. My ass is not cooperating. 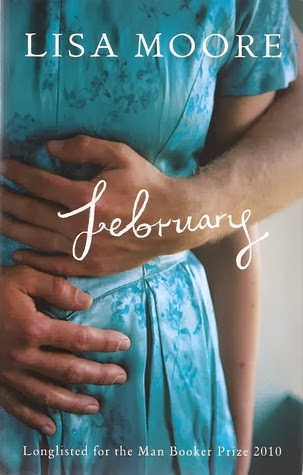 February is about Helen O'Mara, whose husband Cal died when the oil rig Ocean Ranger sank. This really happened, which I didn't know until I read the acknowledgements. Helen's husband died when she was thirty, with three kids and one on the way. The book jumps around in time, but essentially tells the story of Helen moving on with her life while still mourning her husband fully and completely for twenty-six years. Jumping around in time can be a dangerous thing to try, but it really works here, particularly because it demonstrates that, raising her children, dealing with her daughter's teenage pregnancy, travelling with her sister, she is always thinking of Cal, remembering what time they had, thinking of the time of which they were robbed, feeling guilty for not being strong enough or sad enough to follow him.

Lisa Moore is a fantastic writer. Except, man, she uses the word spank a lot in this book. The first time I read it I thought "wow, what an innovative, wonderfully descriptive use of the word spank". The fourth time I thought, hmm, the editor didn't want to say, 'Lisa, hon, any chance you're beating your kids a little too much lately? Or, well, you know, what happens in your bedroom totally stays in your bedroom, but..." No, obviously this is inappropriate November humour, but look:
18-“John was this kind of kid: You’d have to say Stop bouncing that ball. The loud spank of it had an echo and the light over the dining room table would vibrate from the noise.”

57-“You don’t want to remember him that way, Dave said. She heard a loud spank of water, a great gushing slap, and looked out into the hall. She had let the bath run over and the water had come through the ceiling.”

212-“Helen’s shirt was soaked under the arms and it stuck to her back. The other cars were very bright in the sunshine. The sun spanked on their red hoods and blue hoods and on the chrome.”

221-“Massage is her area of expertise. Lulu believes every tender hurt and sorrow collects in the flesh and can be worked out with warm baby oil and a good spanking.”

Okay admittedly, that last one was a conventional use of the term. And the others are all innovative and effective. Maybe it would have helped if I hadn't had to read the book in a day and a half so I could give it to my mother because there are a million requests at the library so we won't be able to renew it. Still, shouldn't a good editor catch that kind of thing? Or am I completely overthinking this because it's November and my ass so devoutly wants to stay stuck to this chair and not get dragged to the gym?

It's a great book, my (or her) strange preoccupation with the word spank notwithstanding. It's not easy to make someone's grief seem keen and sharp and distinct from the general grief of the world, but Moore does it. November is bad. February is good.
books 2009

Lynn said…
I did a project on the Ocean Ranger in grade...9, I think it was. It was looking at it from an engineering perspective, what had gone wrong. I'm really interested in this book as being a more personal side of things. It's going on my reading list for sure.
November 24, 2009 at 9:19 AM

Anonymous said…
That does seem to be an interesting preoccupation with the word "spank." I don't think I've ever seen it used in so many ways.
November 24, 2009 at 11:19 AM

Anonymous said…
A few months ago I read a book that, I swear, used the phrase 'I encourage you to...' on the majority of the pages. It drove me BONKERS. You can only take so much of a single word or phrase, you know?
November 24, 2009 at 2:57 PM