September 13, 2009
I love my husband's grandmother. My own grandparents lived far away and there were impediments to close relationships: my father's mother was older when he was born and she was confined to a wheelchair and quite frail by the time I met her; my father's father was mostly deaf, although I do have fond memories of him reading to me in a thick Scottish accent; my mother's parents were Polish, and despite years of living in Canada neither of them spoke much English -- they just beamed at us and plied us with chocolate and gum. 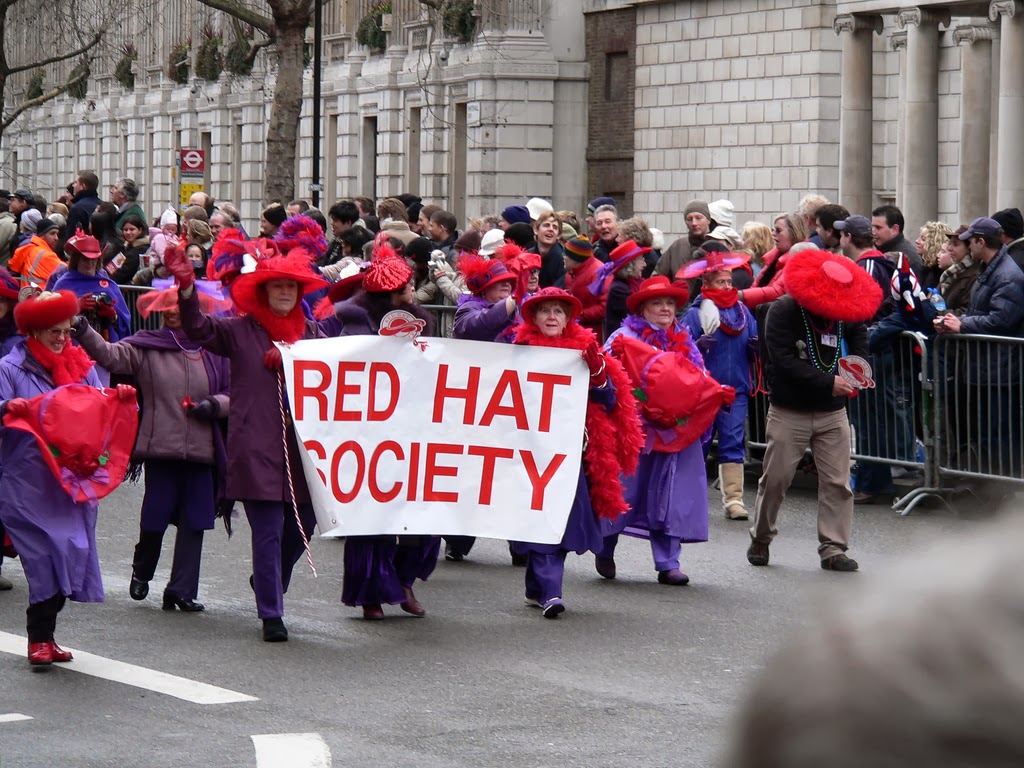 Nana is the perfect old person. She's smart and witty and has a great appetite -- for food and learning and new experiences. She became an artist at the age of sixty. She reads everything I give her. She told me to hurry up and have a baby because they're very nice but also a huge pain in the ass and it was better to just get it over with. We once bought her a Twisted Sister cd for Christmas because she loves the song We're Not Gonna Take It.

My favourite Nana stories: 1) A few years ago some Jehovah's Witnesses started coming to her door. She began by sending them away, not troubling to be overly polite about it. Then someone told her that they view this as persecution that would improve their status with God. So she said "well, they're not getting any more points off of me!" and she started inviting them in for tea. 2) For a while they had neighbours who had a dog who was constantly coming over and digging in their garden. One time the neighbour looked over and saw Grandpa waving the shovel at the dog to scare it off (not hitting it). The next day they found a note and twenty dollars in the mailbox. The note said, "We hope this pays for the fucking flowers". At this point, Nana smiles wickedly and says, "So we took the money, and we spent it!"

There was a big party our at their house for Grandpa's eightieth birthday party. We were all out in the back yard, and another woman who was about eighty said (rather sanctimoniously), "My father always said to everyone when we were all together, 'This is my fortune -- my family'". Nana said "yes, our family's great. I think now it would be fabulous if somebody in it would make a lot of money!"

Grandpa hasn't been well for the past couple of years, so they haven't gotten out much. But Nana came to the wedding in New Hampshire, and was clearly determined to have a good time. We were at the rehearsal clambake on Friday night, and she was sitting beside my husband (her first grandchild, with all the insufferable yet rightful idol-worship that entails). Later on in the evening, my husband asked me if I would show her where the ladies' room was. She got up and said "oh, I've been sitting in one place for way too long", so I offered my arm, more out of a desire to be the dutiful granddaughter-in-law than because I thought she really needed it. But we got a few steps across the floor (the big, sprawling, acres-wide floor) and realized that she really was quite unsteady. We got a few more steps and it hit me...

So we meandered across the cavernous space of Foster's Clambake, and Nana dispensed random words of wisdom... 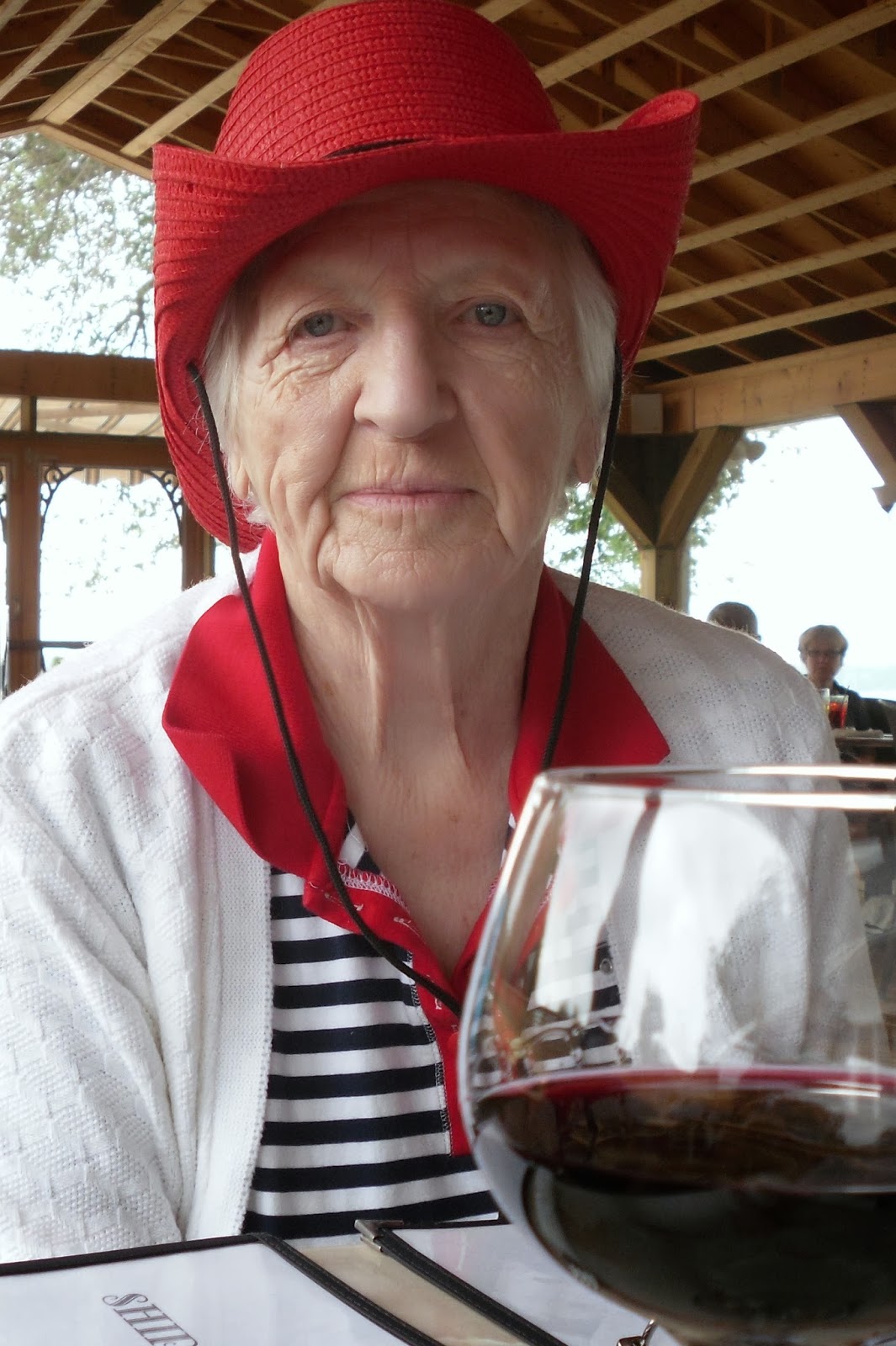 "There's a lot of noise in here. I'm not sure what it's all about."

"Matthew's such a sweetheart. I don't know what I'd do without him." (I could have said 'well, what I usually do without him is eat a lot of takeout and let the kids watch too much tv'. But I thought better of it.)

"Where is this bathroom anyway?" (my thoughts exactly). As we approached the washroom, Kate (my aunt-in-law, her daughter) came out and started talking to us. After a couple of sentences, her eyes widened and she said, "Mom? How much have you had to drink?". Nana said carelessly, "Oh, whatever anybody gave me, I drank it." With dread and awe, Kate said "Oh, Mama...". And then she totally ditched me -- ostensibly to go check that the trolley was waiting. We navigated the washroom without any major disasters, and then I was thinking it would be a shorter and easier walk to the front door to get to the trolley. However, Nana eluded my grasp to lean over the lobster tank and dabble her fingers delightedly in the water.

"Seems kind of dreadful that we eat them." (No comment. I freakin' love lobster). I tugged her away, but every time she wanted to say something, she would put one hand on the counter and stop walking. Finally I thought, what the hell. Let the trolley wait. She's eighty-six, she barely gets to leave the house, if she wants to get plastered and scandalize her daughters and show up at the wedding with a black eye (never mind), what's it to us?

My mother-in-law took her up to her room and put her to bed. Apparently she was going on and on about how wonderful Matthew and I are (Matt for his general first-born-grandson wonderfulness and me because I took everyone's picture with a stuffed lobster, to which my MIL replied "I bought the fucking lobster, Mom). My mother-in-law, normally among our biggest fans, was less than enchanted with us by the time she got back down to the bar.

Jane said…
I'm so glad you posted all of these events/conversations down while they were still fresh. What wonderful memories you will have preserved once she is no longer with you. I wish I had done the same thing with my grandparents. The memories fade so much with time. These are fantastic. She sounds like a hoot!
September 13, 2009 at 6:19 PM

alison said…
Your Nana sounds just like my Great Aunt Kath. I remember watching her throwing back Fuzzy Navels at a barbecue at my sister's house one summer and asking her if she'd like me to make her a cup of tea. She answered, "And ruin this lovely squiffy feeling? No thanks." In her late seventies, she hiked Onaping Falls with us, and went fishing in a small aluminum boat on Charleton Lake. She's 90-something now, and sadly doesn't make the trip over from England anymore. I miss her.
September 15, 2009 at 8:52 AM