What happens when you give a fruit to a nut?

June 01, 2009
I have a couple of reviews brewing. I'm reading The Maternal is Political and learning all about great mothers who move to India with their three-year-olds, engage their children in political debate and homeschool. I also need to review Sima's Undergarments for Women, by my friend-of-a-friend Ilana , who not only is younger than me and published her first novel before I've even finished one but delivers babies on the side. In the wake of all these inspiring women, what's been on my mind lately?
How much I hate my hair, mostly.
I know, I know. It's superficial. It's what's inside your head that matters. You don't change the world or get novels written by worrying about your looks. Still... why can't I just have normal hair? Even normal hair that doesn't look that good would be better. I swear, my hair spends all its time thinking up new and original ways to look dorky. Little bits appear from nowhere and stick out. One side flips out and gets frizzy and the other side turns under and sticks to my head like it's been glued there. Small sections sometimes turn purple. I'm certain that I would be accomplishing great things every day if I had better hair. 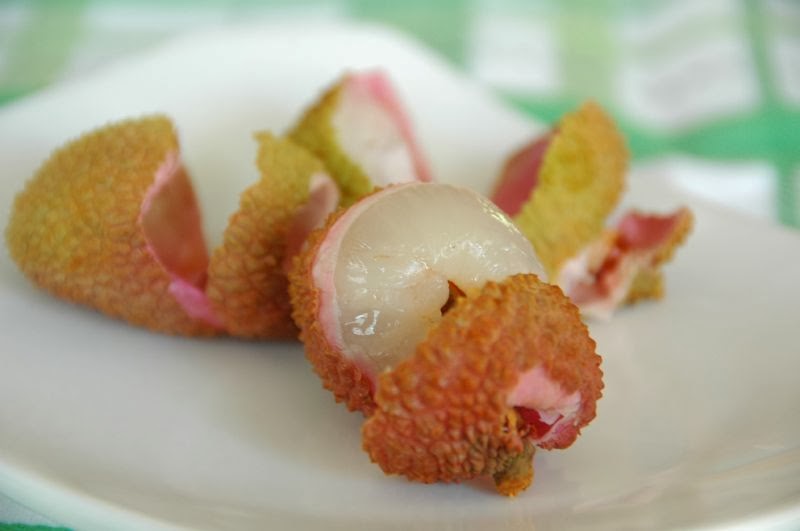 So today I went to the gym, stuck Eve in the playroom, worked out and then went down to get groceries. Our fruit bowl was empty, which for my apple-devouring oldest child is a disaster beyond bearing, so I was somewhere between apples and pears when I happened by a bin full of lychees. I stopped and looked down at the cartoonishly prickly little things and thought "I've never tasted a lychee. My children have never tasted a lychee. I'm a terrible mother and we don't go to museums often enough and they watch too much tv and clearly I'm not exposing them to enough exotic fruits!". Anyway. I bought a few lychees and after supper we gathered around the table for the Grand Lychee Experiment:
"What are those? They look like Pokemon."

"How are you supposed to peel this? Get me a knife."
"Ewwww! They look like brains!"
"I'm not eating that."
"Mmfffff"
"Bleaghhhh!"
"They're terrible! I hate this lychee!"
"Can I have some cocoa rice krispies?"
So then they had bland, processed, culturally bankrupt cereal for dessert and they were trying to steal each other's and it was all funny and cute and then they kept doing it and suddenly I was infuriated and I told them if they spilled cocoa rice krispies all over they would never ever have cocoa rice krispies again. Because they would be dead.
I blame my hair.
Eve of destruction Laird Angus McAngus the general perversity of things

My problem is my clothes are all shrinking. I think its a conspiracy. The same people responsible for that are playing with my bathroom scales.
It's not me, I swear. I don't feel fatter so it can't be me. Did I mention I'm still 18ish. I've celebrated a few dozen birthdays now, but I don't really feel any different so it must not be true. I think I'm rambling. I'll go back to working and watching strange nature documentaries.
June 1, 2009 at 5:32 PM

Anonymous said…
I think lychees are only so so. Sort of bland, really.

And my children rarely eat fruit of any kind. They subsist on goldfish crackers. Sometimes you just give up the fight, you know?
June 1, 2009 at 8:19 PM

Rosemary said…
They do look like Pokemon! LOL We had some Lychees at our 'fear factor' birthday party last year. All the kids ate them and thought they were great - this was likely the case because of the other foods they were challenged to eat! Compared to canned salmon and brussel spouts wrapped in seaweed with a dash of hot sauce lychees are a delight!! :)
June 2, 2009 at 5:45 AM

Molly said…
I hate my hair too. But I'm much pregnant, so I really hate everything right now, except for ice cream sandwiches and the couch.

Thanks for your comment. It's nice to hear that the second one is easier than the first, because the mere thought of the first scared the bejeebus out of me, and it wasn't that bad. This one is ten times scarier.