February 12, 2009
Valentine's Day. The higher grades were allowed to bring change and buy Hershey's kisses a few days ago. They addressed them however they wanted, and then they were delivered today. Angus gave all his to all his female teachers, past and present (that's my boy). Then he came home today and said "some sixth-grade guy named Dawson sent me a Hershey's kiss. I wonder why." ...?
Apparently a lot of the local schools are going to have different start and end times next year for some reason (something to do with the buses, or saving money, or saving money on the buses). Considering the furor that was generated earlier this year when our school had to close one afternoon senior kindergarten class and move fifteen students to the morning, I'm anticipating a backlash of epic proportions. Personally, I'm girding my loins for an exhausting round of hiding my head in the sand, missing all the public meetings, waiting until it's a done deal and then complaining loudly and bitterly. It's a strategy that's served me well in the past. I imagine it will be particularly useful when my kids start dating.
I need a reset book. My bedside pile could probably take me out with an injury at this point, and nothing's really grabbing me. I'm reading one mystery that's kind of flat, two science fiction books by M.John Harrison that are making me feel slow and obtuse, Claire's Head by Catherine Bush which, even though I loved her last book, is not really engaging me. Clearly it's them, not me, right? But every now and then, I start reading a book and really like it, and then stop reading it. It's not like I make a conscious decision, I just suddenly look up seven books later and realize I put that one down and never finished it. I think maybe it's so I'll have something when I need to escape from this weird, uncomfortable, not-fitting feeling. That's what I'm going with, anyway. I'll see if it works.
You know what would be really refreshing? If someone in a tv show experienced a traumatic event and then afterwards when someone asked how they were they said "how the hell do you think? I'm totally f***ed up. Don't expect me to do my job or be any kind of a husband or anything for the next six to twelve weeks. I probably really need some kind of intensive counselling, man." Wouldn't that be great? I think there should be a blanket policy that when anyone in that situation starts with that "I'm fine" bullshit they should be cold-cocked, thrown into a panel van and taken away for a nice long rest.
Real Life
by Sharon Butala
I grabbed this off the shelf in the library on a whim, because I'd been meaning to read her for a while. She always comes across as quite prickly and unlikeable in any interview I've ever heard her in, but I've heard she writes passionately about nature and western Canada. These were all slice-of-life stories about women who mostly inhabit rural areas (maybe all of them do, but I'm not getting paid for this so I'm not going to check). They're not bad, but none of them really moved me. There's one where an artist meets a former lover or husband at her exhibition and they reminisce about another couple with whom they swapped partners, and how this eventually resulted in the other woman killing herself. A little melodramatic, as if deep dark secrets are necessary to give added depth to memory. In another story, a woman with an autistic son is living apart from her husband because he wants the boy to be put in an institution. She's a teacher, and takes on a night class which is taught in a monastery, where she's strongly affected by the serenity and quiet of the monastic lifestyle. Okay, but a little obvious and it doesn't go any further than that. One features a woman in a farm community who suspects a young wife and mother is being abused by her husband and tries to help. The one I probably liked the most was about a woman teaching in an isolated community where most of the population attends a local church. The pastor informs the congregation that the world will end next Saturday at six o'clock, and the teacher is faced with trying to comfort terrified children without offending their devout parents. Her backstory is that her husband died and she came to this town to get away from everything in her old life, but strange phone calls make her think that someone from that life is trying to reconnect with her.

I don't know if these weren't fabulous stories, or they were fabulous stories that I just didn't love. I'm having a reader response crisis. It seemed to me that she was trying very hard not to give to much away, to be spare and illuminate by that spareness. This may have misfired slightly. 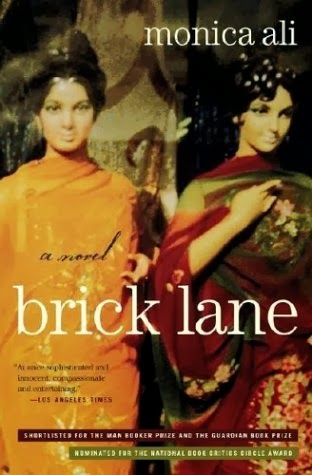 Brick Lane
by Monica Ali
I had heard of this book but not read it, and I took it out with a few others for my Mom when she asked me to pick out some books for her. When she gave it back to me I decided to read a few pages before bed to see if I wanted to read it before returning it. I ended up reading over half of it in a drug-like haze and staying up way too late. It's about a young Bangladeshi woman who comes to London in an arranged marriage to a much older man. It's the story of a life, and it does make you think a lot about the immigrant experience but chiefly it's the characters that made it so irresistible for me. Nazneen, the woman, is so determined to be a dutiful and devout wife and mother, but naturally the events of her life change her beyond what she thought possible. The description of her claustrophobic days in the apartment of the housing estate when she first arrives are so effective I almost felt physically uncomfortable. Chanu, her husband, is not cruel or malicious, but he is a dreamer with an inflated opinion of his own intelligence and prospects; again, the descriptions of him eating messily while holding forth about English literature or his library scheme, usually massaging his stomach, are viscerally discomfiting. Then there is Karim, a young Bangladeshi man who fancies himself an activist and becomes Nazneen's lover, although there are a great many similarities between him and Chanu. Nazneen's friends, the ones who remain traditional and those who become westernized, are also unforgettable characters. I always think real writing talent means being able to create an utterly believable world, where readers feel like they're witnessing real lives of people they care about. I would say that Monica Ali has real writing talent.

"Personally, I'm girding my loins for an exhausting round of hiding my head in the sand, missing all the public meetings, waiting until it's a done deal and then complaining loudly and bitterly. It's a strategy that's served me well in the past. I imagine it will be particularly useful when my kids start dating."

I'm at work and laughed out loud - thank you. Now if we could just convince all our citizens to take this approach my job would be much easier. Z
February 17, 2009 at 7:17 AM